THC defends tenants that experience a “lockout” from there rooms at a residential hotel. 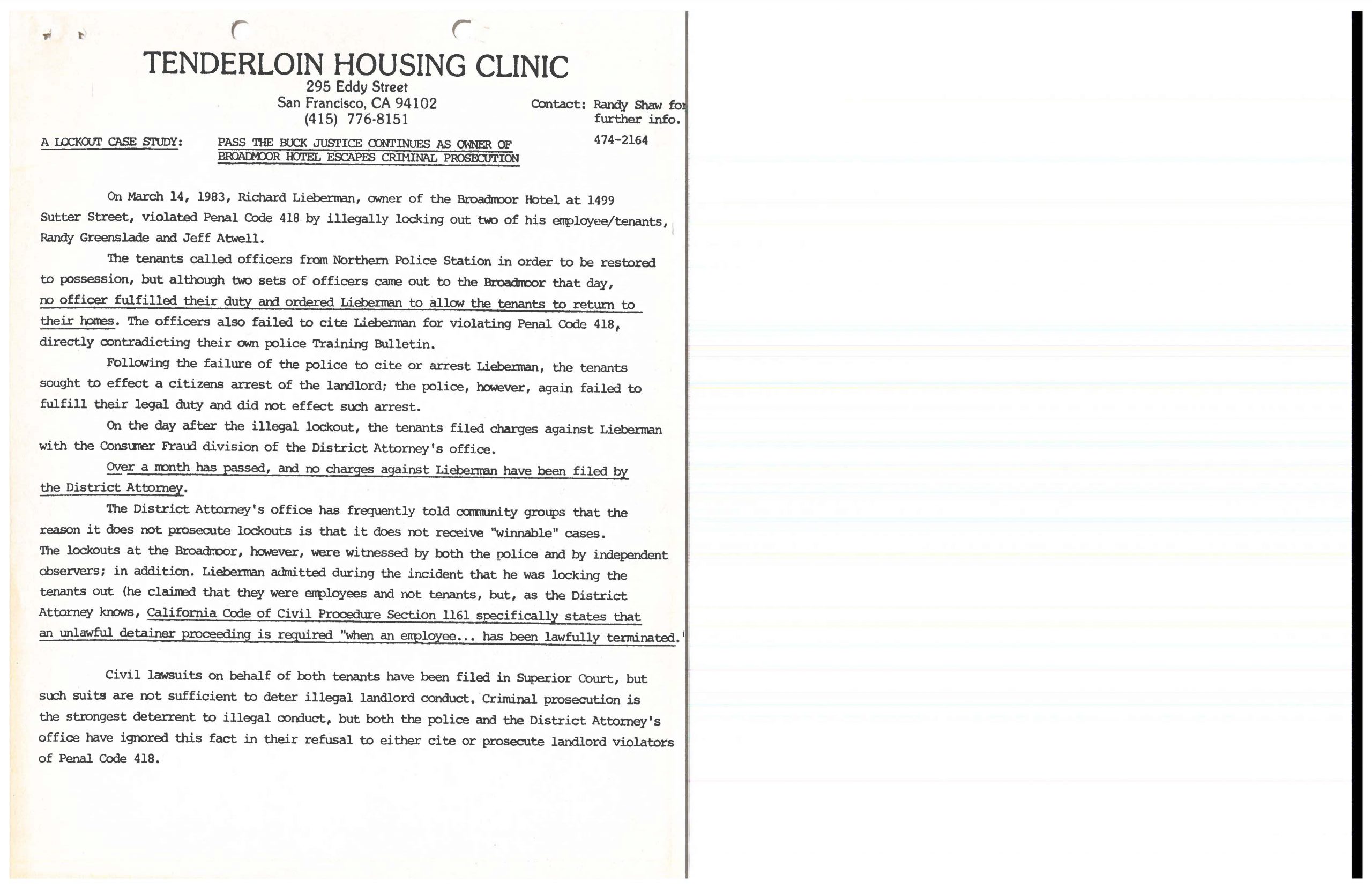 On March 14, 1983, Richard Lieberman, owner of the Broadmoor Hotel at 1499 Sutter Street, violated Penal Code 418 by illegally locking out two of his employee/tenants, Randy Greenslade and Jeff Atwell.

The tenants called officers from Northern Police Station in order to be restored to possession, but although two sets of officers came out to the Broadmoor that day, no officer fulfilled their duty and ordered Lieberman to allow the tenants to return to their homes. The officers also failed to cite Lieberman for violating Penal Code 418, directly contradicting their own police Training Bulletin.

Following the failure of the police to cite or arrest Lieberman, the tenants sought to effect a citizen’s arrest of the landlord; the police, however, again failed to fulfill their legal duty and did not effect such arrest.

On the day after the illegal lockout, the tenants filed charges against Lieberman with the Consumer Fraud division of the District Attorney’s office.

Over a month has passed, and no charges against Lieberman have been filed by the District Attorney.

The District Attorney’s office has frequently told community groups that the reason it does not prosecute lockouts is that it does not receive ‘winnable” cases. The lockouts at the Broadmoor, however, were witnessed by both the police and by independent observers; in addition. Lieberman admitted during the incident that he was locking the tenants out (he claimed that they were employees and not tenants, but, as the District Attorney knows, California Code of Civil Procedure Section 1161 specifically states that an unlawful detainer proceeding is required “when an employee… has been lawfully terminated.

Civil lawsuits on behalf of both tenants have been filed in Superior Court, but such suits are not sufficient to deter illegal landlord conduct. Criminal prosecution is the strongest deterrent to illegal conduct, but both the police and the District Attorney’s office have ignored this fact in their refusal to either cite or prosecute landlord violators of Penal Code 418.