The fist enforcement in 6 years of the City’s Apartment Conversion Ordinance is made.  This, recovering 117 apartments and 19 SROs from tourist rental. 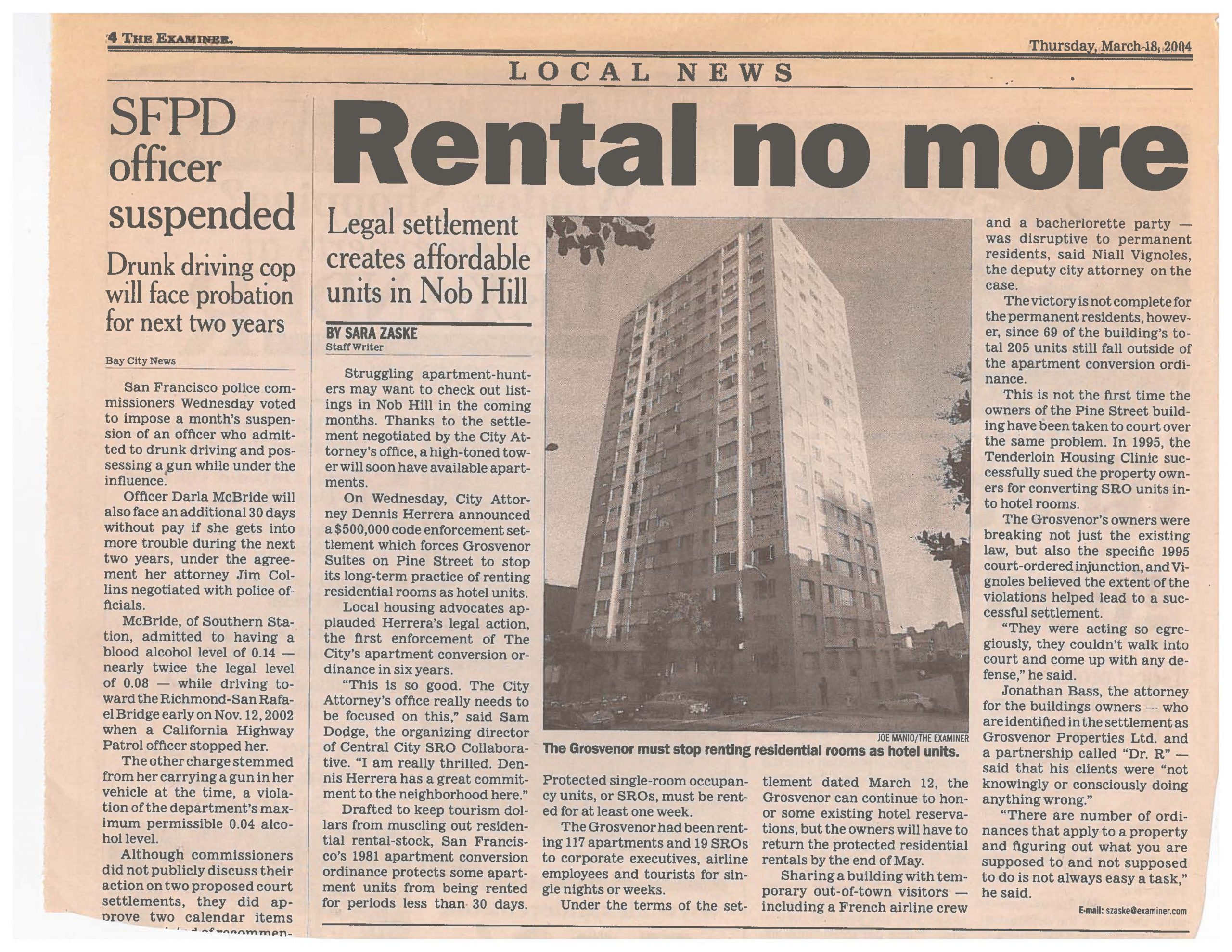 Struggling apartment-hunters may want to check out listings in Nob Hill in the coming months. Thanks to the settlement negotiated by the City Attorney’s office, a high-toned tower will soon have available apartments.

“This is so good. The City Attorney’s office really needs to be focused on this,” said Sam Dodge, the organizing director of Central City SRO Collaborative. “I am really thrilled. Dennis Herrera has a great commitment to the neighborhood here.”

Drafted to keep tourism dollars from muscling out residential rental-stock, San Francisco’s 1981 apartment units from being rented for periods less than 30 days.

Protected single-room occupancy units, or SROs, must be rented for at least one week.

The Grosvenor had been renting 117 apartments and 19 SROs to corporate executives, airline employees and tourists for single nights or weeks.

Under the terms of the settlement dated March 12, the Grosvenor can continue to honor some existing hotel reservations, but the owners will have to return the protected residential rentals by the end of May.

Sharing a building with temporary out-of-town visitors — including a French airline crew and a bachelorette party — was disruptive to permanent residents, said Niall Vignoles, the deputy city attorney on the case.

The victory is not complete for the permanent residents, however, since 69 of the building’s total 205 units still fall outside of the apartment conversion ordinance.

This is not the first time the owners of the Pine Street building have been taken to court over the same problem. In 1995, the Tenderloin Housing Clinic successfully sued the property owners for converting SRO units into hotel rooms.

The Grosvenor’s owners were breaking not just the existing law, but also the specific 1995 court-ordered injunction, and Vignoles believed the extent of the violations helped lead to a successful settlement.

“They were acting so egregiously, they couldn’t walk into court and come up with any defense,” he said.

Jonathan Bass, the attorney for the buildings owners — who are identified in the settlement as Grosvenor Properties Ltd. and a partnership called “Dr. R” — said that his clients were “not knowingly or consciously doing anything wrong.”

“There are number of ordinances that apply to a property and figuring out what you are supposed to do is not always easy a task,” he said.