Tenants filed suit charging the city with allegedly ignoring code violations and placing the lives of thousands of low-income and disabled residents at risk. 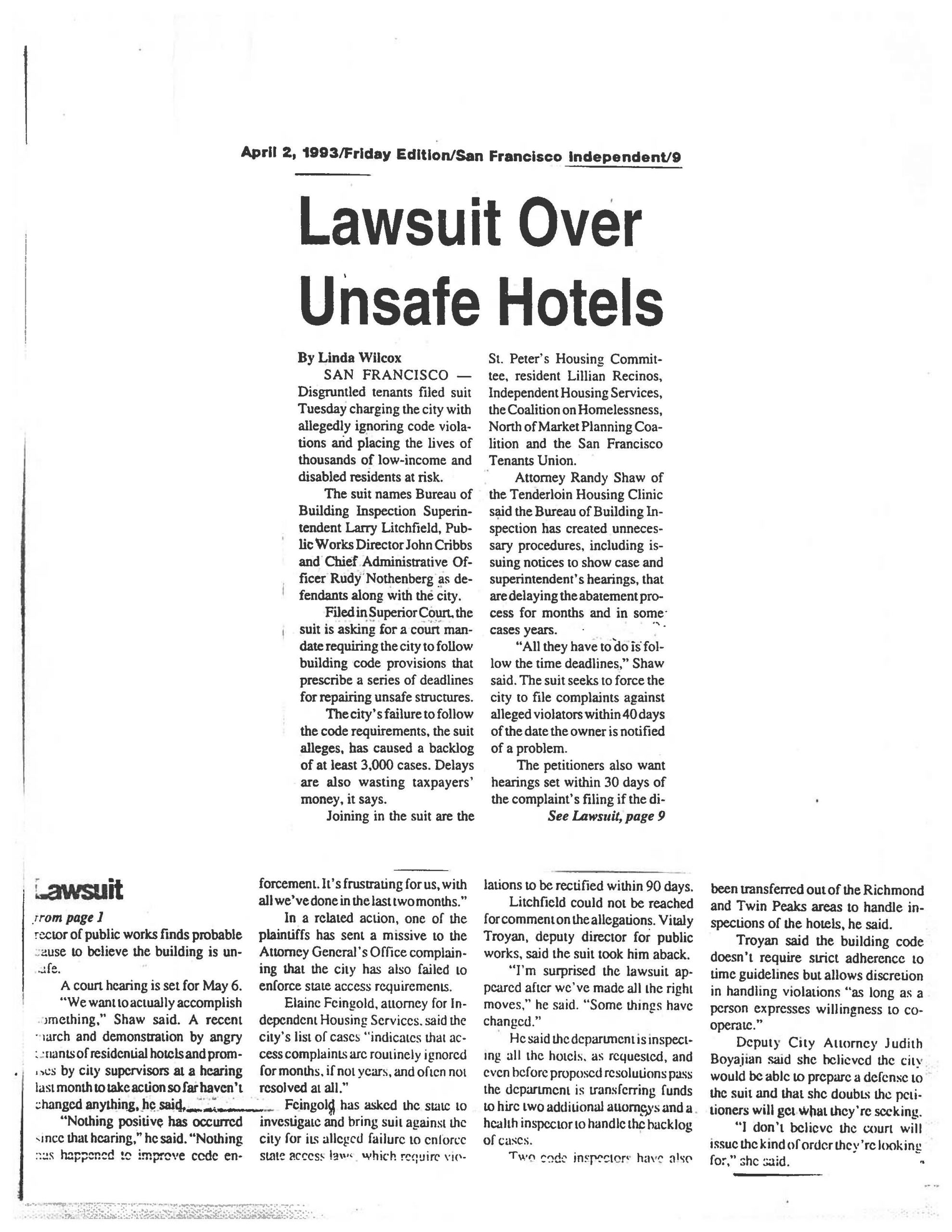 Filed in Superior Court, the suit is asking for a court mandate requiring the city to follow building code provisions that prescribe a series of deadlines for repairing unsafe structures.

The city’s failure to follow the code requirements, the suit alleges, has caused a backlog of at least 3,000 cases. Delays are also wasting taxpayers’ money, it says.

Attorney Randy Shaw of the Tenderloin Housing Clinic sạid the Bureau of Building Inspection has created unnecessary procedures, including issuing notices to show case and superintendent’s hearings, that are delaying the abatement process for months and in some cases years.

“All they have to do is follow the time deadlines,” Shaw said. The suit seeks to force the city to file complaints against alleged violators within 40 days of the date the owner is notified of a problem.

A court hearing is set for May 6 “We want to actually accomplish something.” Shaw said. A recent march and demonstration by angry tenants of residential hotels and promises by city supervisors at a hearing last month to take action so far haven’t changed anything, he said.

“Nothing positive has occurred since that hearing,” he said. “Nothing has happened to improve code enforcement. It’s frustrating for us, with all we’ve done in the last two months.”

In a related action, one of the plaintiffs has sent a missive to the Attorney General’s Office complaining that the city has also failed to enforce state access requirements.

Elaine Feingold, attorney for independent Housing Services, said the city’s list of cases complaints are routinely ignored for months, if not years, and often not resolved at all.

Feingold has asked the state to investigate and bring suit against the city for its alleged failure to enforce state access laws which require violations to be rectified within 90 days.

Litchfield could not be reached for comment on the allegations. Vitaly Troyan, deputy director of public works, said the suit took him aback.

“I’m surprised the lawsuit appeared after we’ve made all the right moves,” he said. “Some things have changed.”

He said the department is inspecting all the hotels, as requested, and even before proposed resolutions pass the department is transferring funds to hire two additional attorney’s and a health inspector to handle the backlog of cases.

Two code inspectors have also been transferred out of the Richmond and Twin Peaks areas to handle inspections of the hotels, he said.

Deputy City Attorney Judith Boyajian said she believed the city would be able to prepare a defense to the suit and that she doubts the petitioners will get what they’re seeking.

“I don’t believe the court will issue the kind of order they’re looking for,” she said.