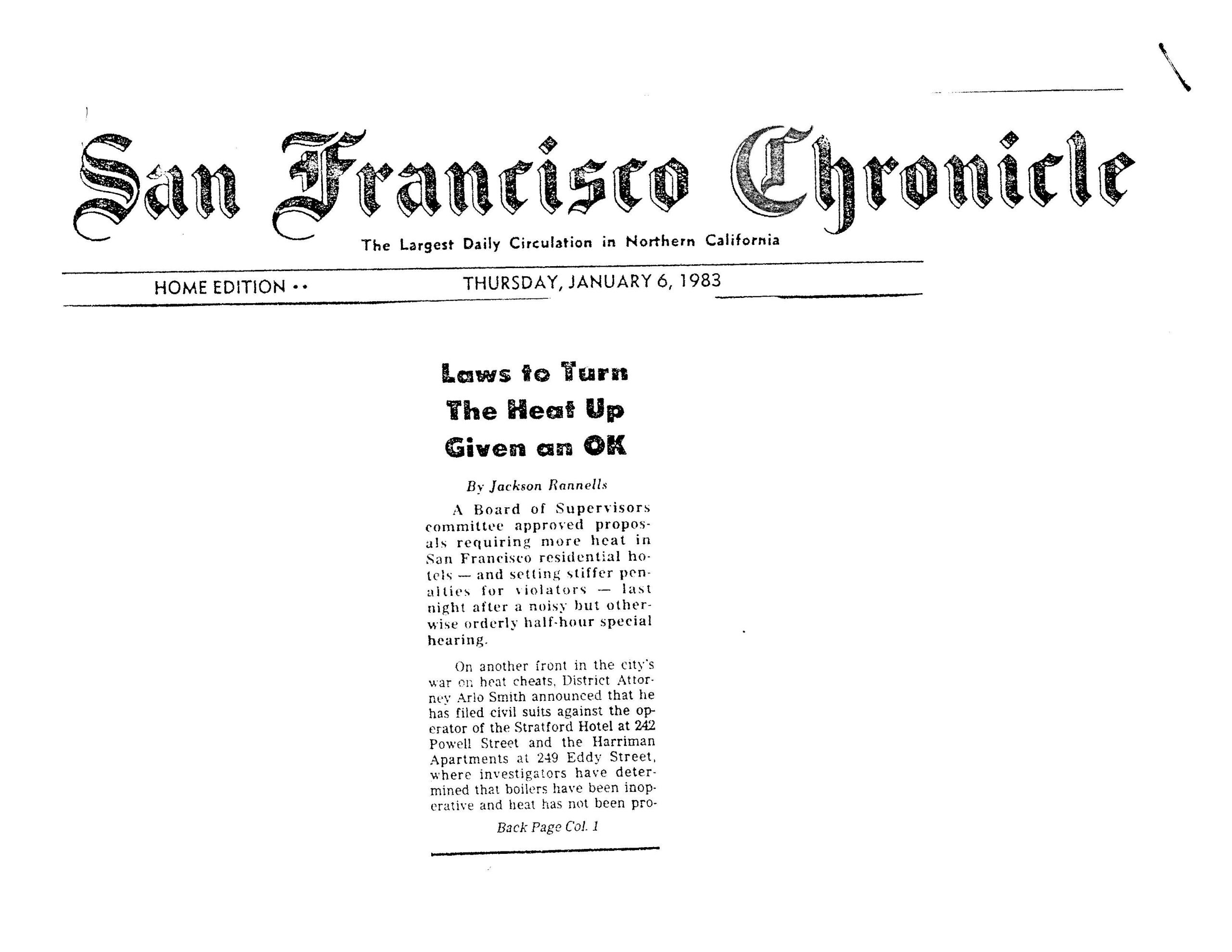 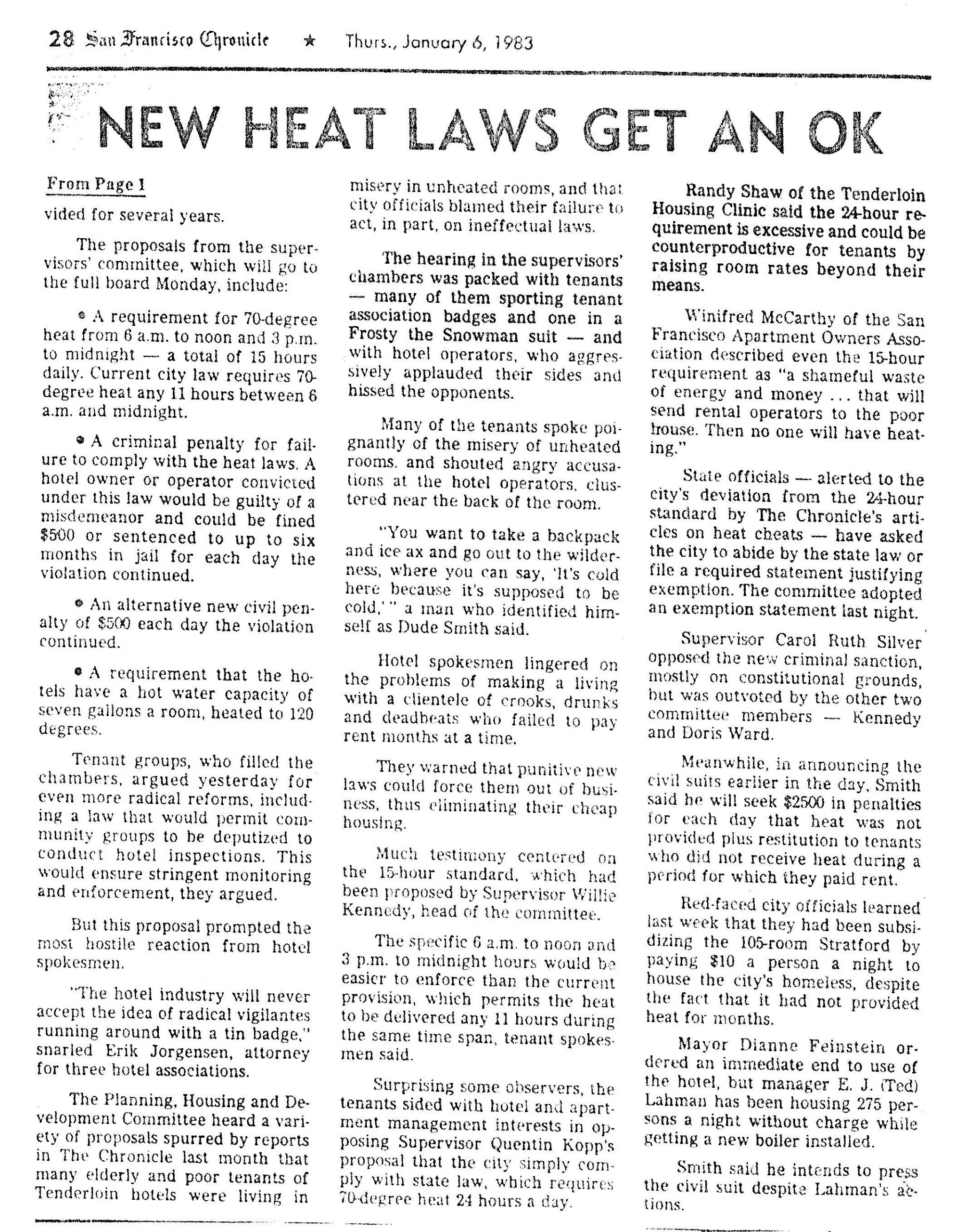 Laws to Turn The Heat Up Given an OK

On another irony in the city’s war on heat cheats, District Attorney Arlo Smith announced that he has filed civil suits against the operator of the Stratford Hotel at 242 Powell Street and the Harriman Apartments at 249 Eddy Street, where investigators have determined that boilers have been inoperative and heat has not been provided for several years.

The proposals from the supervisors’ committee, which will go to the full board Monday, include:

Tenant groups, who filled the chambers, argued yesterday for even more radical reforms, including a law that would perinit community groups to be deputized to conduct hotel inspections. This would ensure stringent monitoring and enforcement, they argued.

But this proposal prompted the most hostile reaction from hotel spokesmen.

“The hotel industry will never accept the idea of radical vigilantes running around with a tin badge.” snarled Erik Jorgensen, attorney for three hotel associations.

The Planning, Housing and Development Committee heard a variety of proposals spurred by reports in The Chronicle last month that many elderly and poor tenants of Tenderloin hotels were living in misery in unheated rooms, and that city officials blamed their failure to act, in part, on ineffectual laws.

The hearing in the supervisors chambers was packed with tenants – many of them sporting tenant association badges and one in a Frosty the Snowman suit and with hotel operators, who aggressively applauded their sides and hissed the opponents.

Many of the tenants spoke poignantly of the misery of unheated rooms, and shouted angry accusations at the hotel operators, clustered near the back of the room.

“You want to take a backpack and ice ax and go out to the wilderness, where you can say, ‘It’s cold here because it’s supposed to be cold,’” a man who identified himself as Dude Smith said.

Hotel spokesmen lingered on the problems of making a living with a clientele of crooks, drunks and deadbeats who failed to pay rent months at a time.

They warned that punitive new 12w’s could force them out of business, thus eliminating their cheap housing.

Much testimony centered on the 15-hour standard, which had been proposed by Supervisor Willie Kennedy, head of the committee

The specific 6 a.m. to noon and 3 p.m. to midnight hours would be easier to enforce than the current provision, which permits the heat to be delivered any 11 hours during the same time span, tenant spokes. men said.

Randy Shaw of the Tenderloin Housing Clinic said the 24-hour requirement is excessive and could be counterproductive for tenants by raising room rates beyond their means.

Winifred McCarthy of the San Francisco Apartment Owners Association described even the 15-hour requirement as “a shameful waste of energy and money … that will send rental operators to the poor trouse. Then no one will have heating.”

State officials – alerted to the city’s deviation from the 24-hour standard by The Chronicle’s articles on heat cheats — have asked the city to abide by the state law or file a required statement justifying exemption. The committee adopted an exemption statement last night.

Supervisor Carol Ruth Silver opposed the new criminal sanction, mostly on constitutional grounds, but was outvoted by the other two committee members — Kennedy and Doris Ward.

Meanwhile, in announcing the civil suits earlier in the day, Smith said he will seek $2500 in penalties for each day that heat was not provided plus restitution to tenants who did not receive heat during a period for which they paid rent.

Red-faced city officials learned last week that they had been subsidizing the 105-room Stratford by paying $10 a person a night 10 house the city’s homeless, despite the fact that it had not provided heat for months.

Mayor Dianne Feinstein ordered an immediate end to use of the hotel, but manager E. J. (Ted) Lahman has been housing 275 persons a night without charge while getting a new boiler installed.

Smith said he intends to press the civil suit despite Lahman’s actions.