Michael Brooke the last tenant left at the Post Hotel, won’t take the owners money to move out. THC intercedes for Brooke – questions who the rooms will be rented out to after renovations. 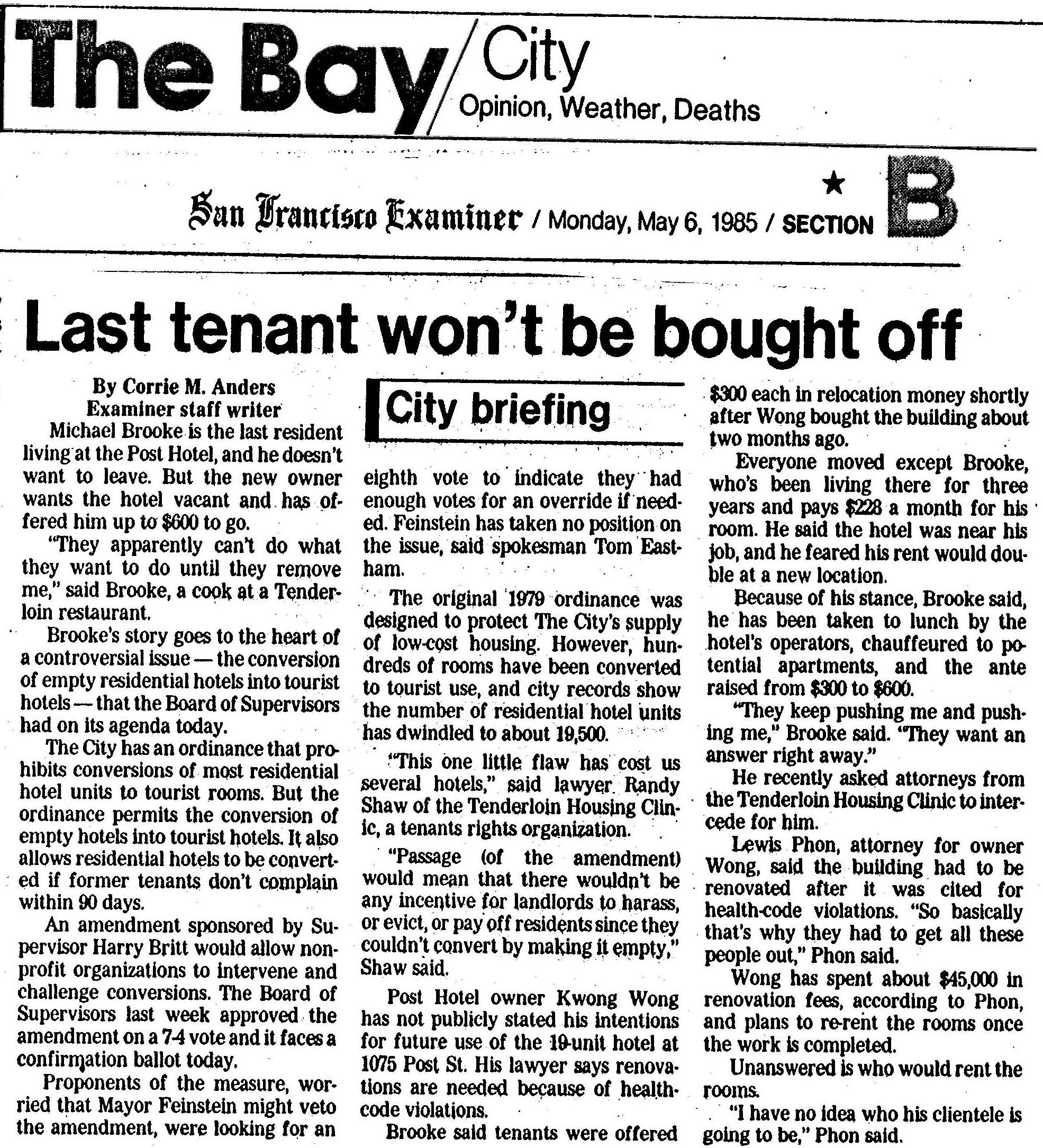 Michael Brooke is the last resident living at the Post Hotel, and he doesn’t want to leave. But the new owner wants the hotel vacant and has offered him up to $600 to go.

“They apparently can’t do what they want to do until they remove me,” said Brooke, a cook at a Tenderloin restaurant.

Brooke’s story goes to the heart of a controversial issue – the conversion of empty residential hotels into tourist hotels – that the Board of Supervisors had on its agenda today.

An amendment sponsored by Supervisor Harry Britt would allow non-profit organizations to intervene and challenge conversions. The Board of Supervisors last week approved the amendment on a 7-4 vote and it faces a confirmation ballot today.

Proponents of the measure, worried that Mayor Feinstein might veto the amendment, were looking for an eighth vote to indicate they had enough votes for an override if needed. Feinstein has taken no position on the issue, said spokesman Tom Eastham.

The original 1979 ordinance was designed to protect The City’s supply of low-cost housing. However, hundreds of rooms have been converted to tourist use, and city records show the number of residential hotel units has dwindled to about 19,500.

“This one little flaw has cost us several hotels,” said lawyer Randy Shaw of the Tenderloin Housing Clinic, a tenants rights organization.

“Passage (of the amendment) would mean that there wouldn’t be any incentive for landlords to harass, or evict, or pay off residents since they couldn’t convert by making it empty,” Shaw said.

Post Hotel owner Kwong Wong has not publicly stated his intentions for future use of the 19-unit hotel at 1075 Post St. His lawyer says renovations are needed because of health-code violations.

Brooke said tenants were offered $300 each in relocation money shortly after Wong bought the building about two months ago.

Everyone moved except Brooke, who’s been living there for three years and pays $228 a month for his room. He said the hotel was near his job, and he feared his rent would double at a new location.

Because of his stance, Brooke said, he has been taken to lunch by the hotel’s operators, chauffeured to potential apartments, and the ante raised from $300 to $600.

“They keep pushing me and pushing me,” Brooke said. “They want an answer right away.”

He recently asked attorneys from the Tenderloin Housing Clinic to intercede for him.

Lewis Phon, attorney for owner Wong, said the building had to be renovated after it was cited for health-code violations. “So basically that’s why they had to get all these people out,” Phon said.

Wong has spent about $45,000 in renovation fees, according to Phon, and plans to re-rent the rooms once the work is completed.

Unanswered is who would rent the rooms.

“I have no idea who his clientele is going to be,” Phon said.