The Bureau of Building Investigation faces criticism and calls for action after many codes are not enforced in places where low income individuals live. 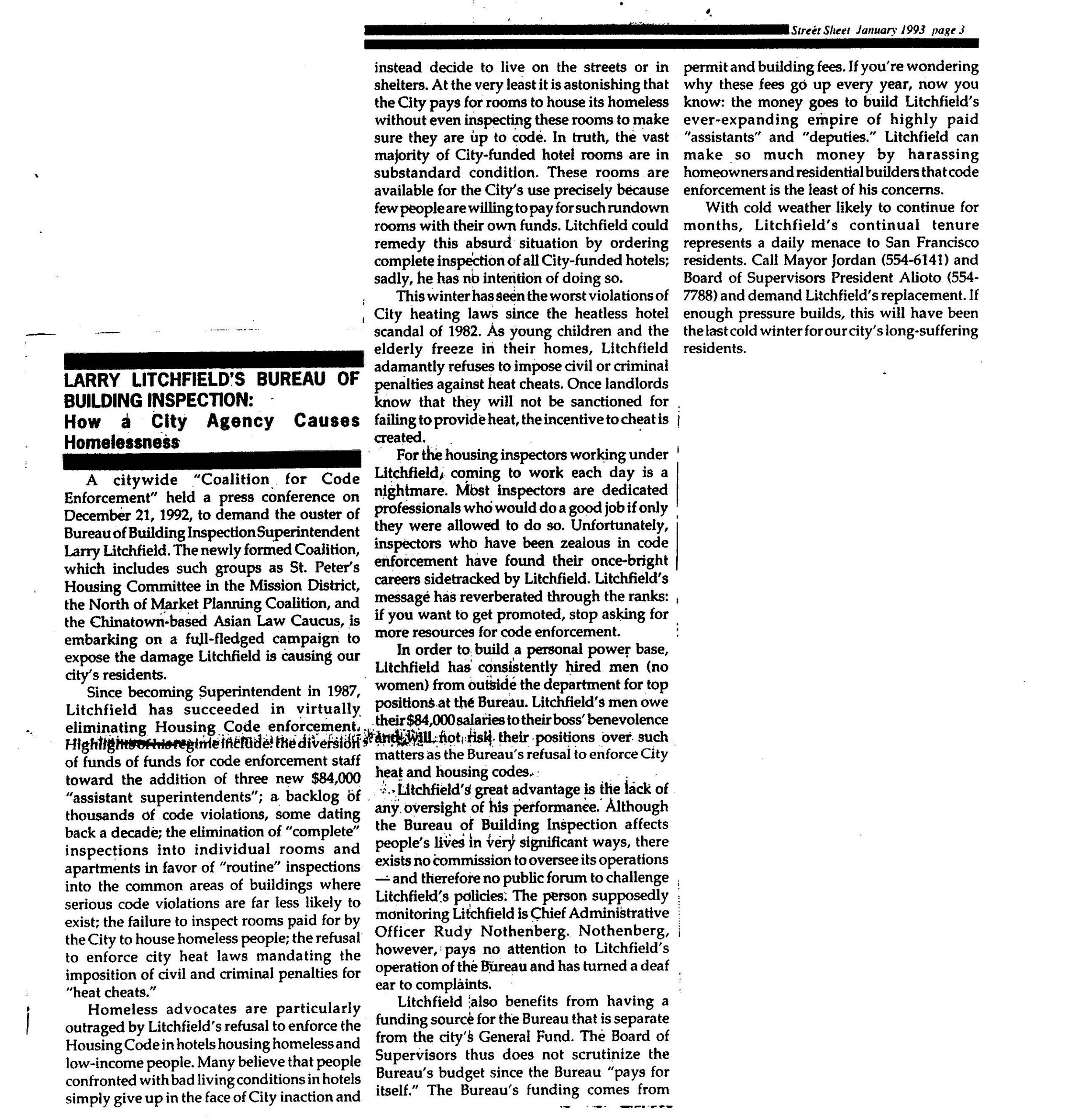 A citywide “Coalition for code Enforcement” held a press conference on December 21, 1992, to demand the ouster of Bureau of Building Inspection Superintendent Larry Litchfield. The newly formed Coalition, which includes such groups as St. Peter’s Housing Committee in the Mission District, the North of Market Planning Coalition, and the Chinatown-based Asian Law Caucus, is embarking on a full-fledged campaign to expose the damage Litchfield is causing our city’s residents.

Since becoming Superintendent in 1987, Litchfield has succeeded in virtually eliminating Housing Code enforcement, Highlights of the regime include the diversion of funds of funds for code enforcement staff toward the addition of three new $84,000 “assistant superintendents”; a backlog of thousands of code violations, some dating back a decade; the elimination of “complete” inspections into individual rooms and apartments in favor of “routine” inspections into the common areas of buildings where serious code violations are far less likely to exist; the failure to inspect rooms paid for by the City to house homeless people; the refusal to enforce city heat laws mandating the imposition of civil and criminal penalties for “heat cheats.”

Homeless advocates are particularly outraged by Litchfield’s refusal to enforce the Housing Code in hotels housing homeless and low-income people. Many believe that people confronted with bad living conditions in hotels simply give up in the face of City inaction and instead decide to live on the streets or in shelters. At the very least it is astonishing that the City pays for rooms to house its homeless without even inspecting these rooms to make sure they are up to code. In truth, the vast majority of City-funded hotel rooms are in substandard condition. These rooms are available for the City’s use precisely because few people are willing to pay for such rundown rooms with their own funds. Litchfield could remedy this absurd situation by ordering complete inspection of all City-funded hotels; sadly, he has no intention of doing so.

This winter has seen the worst violations of City heating laws since the heatless hotel scandal of 1982. As young children and the elderly freeze in their homes, Litchfield adamantly refuses to impose civil or criminal penalties against heat cheats. Once landlords know that they will not be sanctioned for failing to provide heat, the incentive to cheat is created.

For the housing inspectors working under Litchfield, coming to work each day is a nightmare. Most inspectors are dedicated professionals who would do a good job if only they were allowed to do so. Unfortunately, inspectors who have been zealous in code enforcement have found their once-bright careers sidetracked by Litchfield. Litchfield’s message has reverberated through the ranks: if you want to get promoted, stop asking for more resources for code enforcement.

In order to build a personal power base, Litchfield has consistently hired men (no women) from outside the department for top positions at the Bureau. Litchfield’s men owe their $84,000 salaries to their boss’ benevolence and will not risk their positions over such matters as the Bureau’s refusal to enforce City heat and housing codes.

Litchfield’s great advantage is the lack of any oversight of his performance. Although the Bureau of Building Inspection affects people’s lives in very significant ways, there exists no commission to oversee its operations — and therefore no public forum to challenge Litchfield’s policies. The person supposedly monitoring Litchfield is Chief Administrative Officer Rudy Nothenberg. Nothenberg, however, pays no attention to Litchfield’s operation of the Bureau and has turned a deaf ear to complaints.

Litchfield also benefits from having a funding source for the Bureau that is separate from the city’s General Fund. The Board of Supervisors thus does not scrutinize the Bureau’s budget since the Bureau “pays for itself.” The Bureau’s funding comes from permit and building fees. If you’re wondering why these fees go up every year, now you know: the money goes to build Litchfield’s ever-expanding empire of highly paid “assistants” and “deputies.” Litchfield can make so much money by harassing homeowners and residential builders that code enforcement is the least of his concerns.

With cold weather likely to continue for months, Litchfield’s continual tenure represents a daily menace to San Francisco residents. Call Mayor Jordan (554-5141) and Board of Supervisors President Alioto (554-7788) and demand Litchfield’s replacement. If enough pressure builds, this will have been the last cold winter for our city’s long-suffering residents.