A panel of three judges says an eviction cannot be challenged as retaliatory if the Ellis Act was properly invoked. 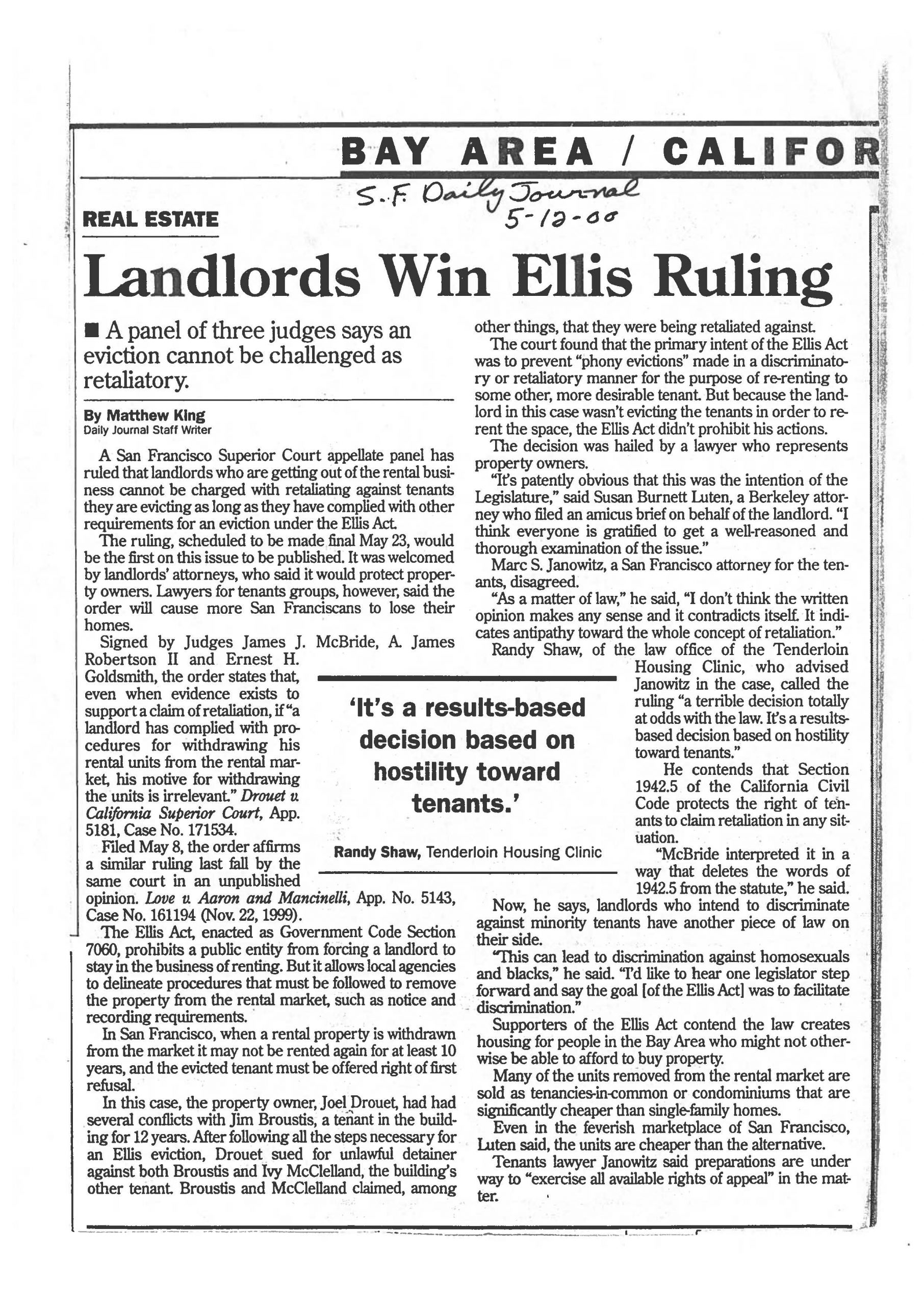 A San Francisco Superior Court appellate panel has ruled that landlords who are getting out of the rental business cannot be charged with retaliating against tenants they are evicting as long as they have complied with other requirements for an eviction under the Ellis Act.

The ruling, scheduled to be made final May 23, would be the first on this issue to be published. It was welcomed by landlords’ attorneys, who said it would protect property owners. Lawyers for tenants groups, however, said the order will cause more San Franciscans to lose their homes.

Signed by Judges James J. McBride, A. James Robertson II and Ernest H. Goldsmith, the order states that, even when evidence exists to support a claim of retaliation, if “a landlord has complied with procedures for withdrawing his rental units from the rental market, his motive for withdrawing the units is irrelevant.” Drouet v. California Superior Court, App. 5181, Case No. 171534.

The Ellis Act, enacted as Government Code Section 7060, prohibits a public entity from forcing a landlord to stay in the business of renting. But it allows local agencies to delineate procedures that must be followed to remove the property from the rental market, such as notice and recording requirements.

In San Francisco, when a rental property is withdrawn from the market it may not be rented again for at least 10 years, and the evicted tenant must be offered right of first refusal.

In this case, the property owner, Joel Drouet, had had several conflicts with Jim Broustis, a tenant in the building for 12 years. After following all the steps necessary for an Ellis eviction, Drouet sued for unlawful detainer against both Broustis and Ivy McClelland, the building’s other tenant. Broustis and McClelland claimed, among other things, that they were retaliated against.

The court found that the primary intent of the Ellis Act was to prevent “phony evictions” made in a discriminatory or retaliatory manner for the purpose of re-renting to some other, more desirable tenant. But because the landlord in this case wasn’t evicting the tenants in order to re-rent the space, the Ellis Act didn’t prohibit his actions.

The decision was hailed by a lawyer who represents property owners.

“It’s patently obvious that this was the intention of the Legislature,” said Susan Burnett Luten, a Berkeley attorney who filed an amicus brief on behalf of the landlord. “I think everyone is gratified to get a well-reasoned and thorough examination of the issue.”

“As a matter of law,” he said, “I don’t think the written opinions makes any sense and it contradicts itself. It indicates antipathy toward the whole concept of retaliation.”

Randy Shaw, of the law office of the Tenderloin Housing Clinic, who advised Janowitz in the case, called the ruling “a terrible decision totally at odds with the law. It’s a results-based decision based on hostility towards tenants.”

He contends that Section 1942.5 if the California Civil Code protects the right of tenants to claim retaliation in any situation.

“McBride interpreted it in a way that deletes the words of 1942.5 from the statute,” he said.

Now, he says, landlords who intend to discriminate against minority tenants have another piece of law on their side.

“This can lead to discrimination against homosexuals and blacks,” he said. “I’d like to hear one legislator step forward and say the goal [of the Ellis Act] was to facilitate discrimination.”

Supporters of the Ellis Act contend the law creates housing for people in the Bay Area who might not otherwise be able to afford to buy property.

Many of the units removed from the rental market are sold as tenancies-in-common or condominiums that are significantly cheaper than single-family homes.

Even in the feverish marketplace of San Francisco, Luten said, the units are cheaper than the alternative.

Tenants’ lawyer Janowitz said preparations are under way to “exercise all available rights of appeal” in the matter.