A retrial is granted for tenants facing eviction under the Ellis Act, represented by THC Attorney Raquel Fox. 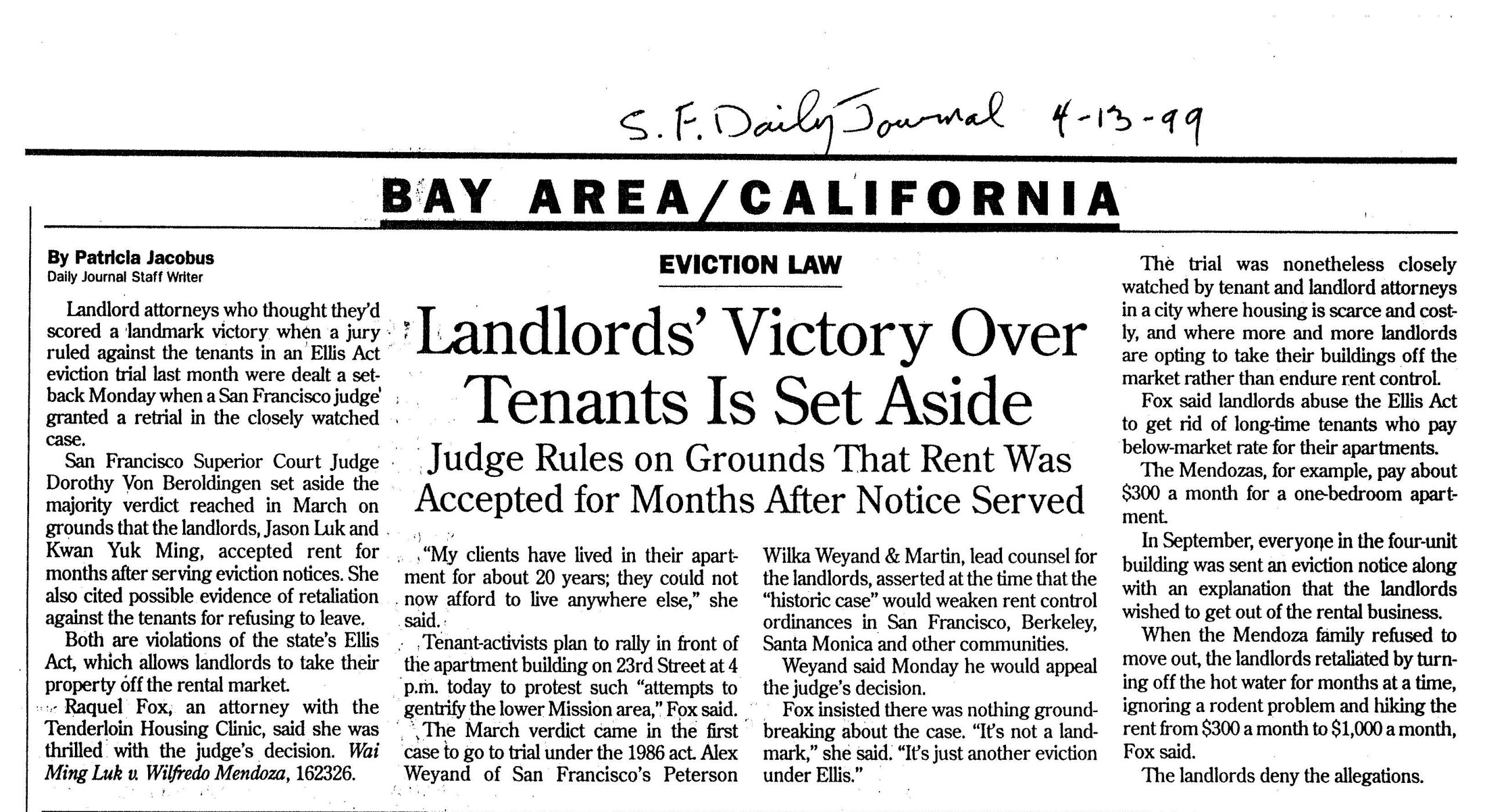 Landlord attorneys who thought they’d scored a landmark victory when a jury ruled against the tenants in an Ellis Act eviction trial last month were dealt a setback Monday when a San Francisco judge granted a retrial in the closely watched case.

San Francisco Superior Court Judge Dorothy Von Beroldingen set aside the majority verdict reached in March on grounds that the landlords, Jason Luk and Kwan Yuk Ming, accepted rent for months after serving eviction notices. She also cited possible evidence of retaliation against the tenants for refusing to leave.

Both are violations of the state’s Ellis Act, which allows landlords to take their property off the rental market.

Raquel Fox, an attorney with the Tenderloin Housing Clinic, said she was thrilled with the judge’s decision. Wai Ming Luk v. Welfredo Mendoza, 162326. “My clients have lived in their apartment for about 20 years; they could not now afford to live anywhere else,” she said.

Tenant-activists plan to rally in front of the apartment building on 23rd Street at 4 p.m. today to protest such “attempts to gentrify the lower Mission area,” Fox said.

The March verdict came in the first case to go to trial under the 1986 act. Alex Weyand of San Francisco’s Peterson Wilka Weyand & Martin, lead counsel for the landlords, asserted at the time that the “historic case” would weaken rent control ordinances in San Francisco, Berkeley, Santa Monica and other communities.

Weyand said Monday he would appeal the judge’s decision. Fox insisted there was nothing groundbreaking about the case. “It’s not a landmark,” she said. “It’s just another eviction under Ellis.” The trial was nonetheless closely watched by tenant and landlord attorneys in a city where more and more landlords are opting to take their buildings off the market rather than endure rent control.

Fox said landlords abuse the Ellis Act to get rid of long-time tenants who pay below-market rate for their apartments. The Mendozas, for example, pay about $300 a month for a one-bedroom apartment.

In September, everyone in the four-unit building was sent an eviction notice along with an explanation that the landlords wished to get out of the rental business. When the Mendoza family refused to move out, the landlords retaliated by turning off the hot water for months at a time, ignoring a rodent problem and hiking the rent from $300 a month to $1,000 a month, Fox said.

The landlords deny the allegations.