Protection against eviction for seniors and the disabled is approved, landlords promise retaliation. 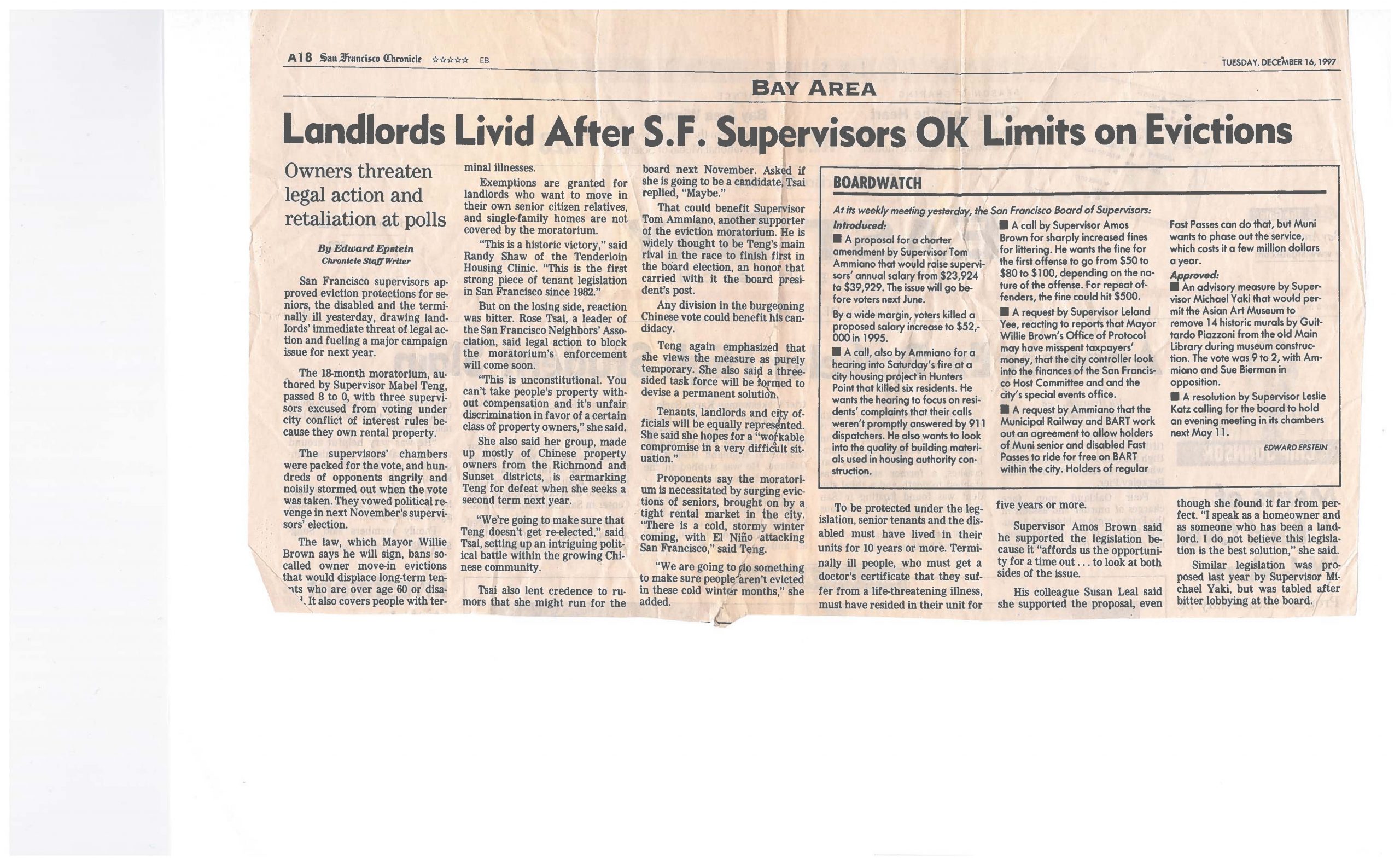 The 18-month moratorium, authored by Supervisor Mabel Teng, passed 8 to 0, with three supervisors excused from voting under city conflict of interest rules because they own rental property.

The supervisors’ chambers were packed for the vote, and hundreds of opponents angrily and noisily stormed out when the vote was taken. They vowed political revenge in next November’s supervisors’ election.

The law, which Mayor Willie Brown says he will sign, bans so-called owner move-in evictions that would displace long term tenants who are over age 60 or disabled. It also covers people with terminal illnesses.

Exemptions are granted for landlords who want to move in their own senior citizen relatives, and single-family homes are not covered by the moratorium.

“This is a historic victory,” said Randy Shaw of the Tenderloin Housing Clinic. “This is the first strong piece of tenant legislation in San Francisco since 1982.”

But on the losing side, the reaction was bitter. Rose Tsai, a leader of the San Francisco Neighbors’ Association, said legal action to block the moratorium’s enforcement will come soon.

“This is unconstitutional. You can’t take people’s property without compensation and it’s unfair discrimination in favor of a certain class of property owners,”she said.

She also said her group, made up mostly of Chinese property owners from the Richmond and Sunset districts, is earmarking Teng for defeat when she seeks a second term next year.

“We’re going to make sure that Teng doesn’t get re-elected,” said Tsai, setting up an intriguing political battle within the growing Chinese community.

Tsai also lent credence to rumors that she might run for the board next November. Asked if she is going to be a candidate, Tsai replied, “Maybe.”

That could benefit Supervisor Tom Ammiano, another supporter of the eviction moratorium. He is widely thought to be Teng’s main rival in the race to finish first in the board election, an honor that carried with it the board president’s post.

Any division in the burgeoning Chinese vote could benefit his candidacy.

Teng again emphasized that she views the measure as purely temporary. She also said a three-sided task force will be formed to devise a permanent solution.

Tenants, landlords and city officials will be equally represented. She said she hopes for a “workable compromise in a very difficult situation.”

Proponents say the moratorium is necessitated by surging evictions of seniors, brought on by a tight rental market in the city. “There is a cold, stormy winter coming, with El Nino attacking San Francisco,” said Teng.

“We are going to do something to make sure people aren’t evicted in these cold winter months,” she added.

His colleague Susan Leal said she supported the proposal, even though she found it far from perfect. “I speak as a homeowner and as someone who has been a landlord. I do not believe this legislation is the best solution,” she said.

Similar legislation was proposed last year by Supervisor Michael Yaki, but was tabled after bitter lobbying at the board.