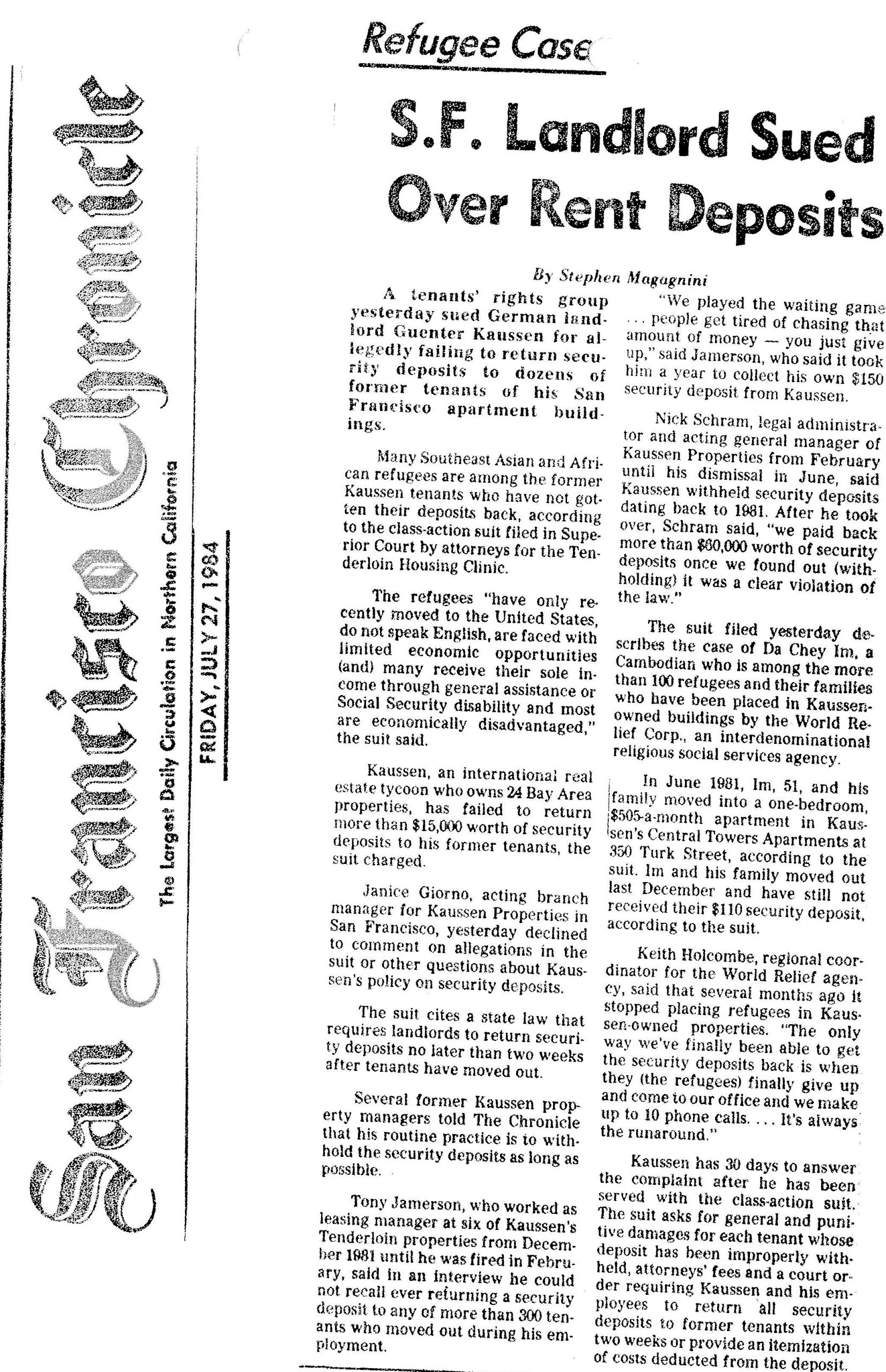 Many Southeast Asian and African refugees are among the former Kaussen tenants who have not gotten their deposits back, according to the class-action suit filed in Superior Court by attorneys for the Tenderloin Housing Clinic.

The refugees “have only recently moved to the United States, do not speak English, are faced with limited economic opportunities (and) many receive their sole income through general assistance or Social Security disability and most are economically disadvantaged,” the suit said.

Kaussen, an international real estate tycoon who owns 24 Bay Area properties, has failed to return more than $15,000 worth of security deposits to his former tenants, the suit charged.

Janice Giorno, acting branch manager for Kaussen Properties in San Francisco, yesterday declined to comment on allegations in the suit or other questions about Kaussen’s policy on security deposits.

The suit cites a state law that requires landlords to return security deposits no later than two weeks after tenants have moved out.

Several former Kaussen property managers told The Chronicle that his routine practice is to with-hold the security deposits as long as possible.

Tony Jamerson, who worked as leasing manager at six of Kaussen’s Tenderloin properties from December 1981 until he was fired in February, said in an interview he could not recall ever returning a security deposit to any of more than 300 tenants who moved out during his employment.

“We played the waiting game… people get tired of chasing that amount of money — you just give up,” said Jamerson, who said it took him a year to collect his own $150 security deposit from Kaussen.

Nick Schram, legal administrator and acting general manager of Kaussen Properties from February until his dismissal in June, said Kaussen withheld security deposits dating back to 1981. After he took over, Schram said, “we paid back more than $60,000 worth of security deposits once we found out (withholding) it was a clear violation of the law.”

The suit filed yesterday describes the case of Da Chey Im, a Cambodian who is among the more than 100 refugees and their families who have been placed in Kaussen – owned buildings by the World Relief Corp., an interdenominational religious social services agency.

Keith Holcombe, regional coordinator of the World Relief agency said that several months ago it stopped placing refugees in Kaussen-owned properties. “The only way we’ve finally been able to get the security deposits back is when they (the refugees) finally give up and come to our office and we make up to 10 phone calls…. It’s always the runaround.

Kaussen has 30 days to answer the complaint after he has been served with the class-action suit. The suit asks for general and punitive damages for each tenant whose deposit has been improperly withheld, attorney’s fees and a court order requiring Kaussen and his employees to return all security deposits to former tenants within two weeks or provide an itemization of costs deducted from the deposit.