The Tenderloin Housing Clinic has to turn away hundreds of low income people looking for housing due to lack of affordable housing. Randy Shaw calls on the city to expand low-income housing. 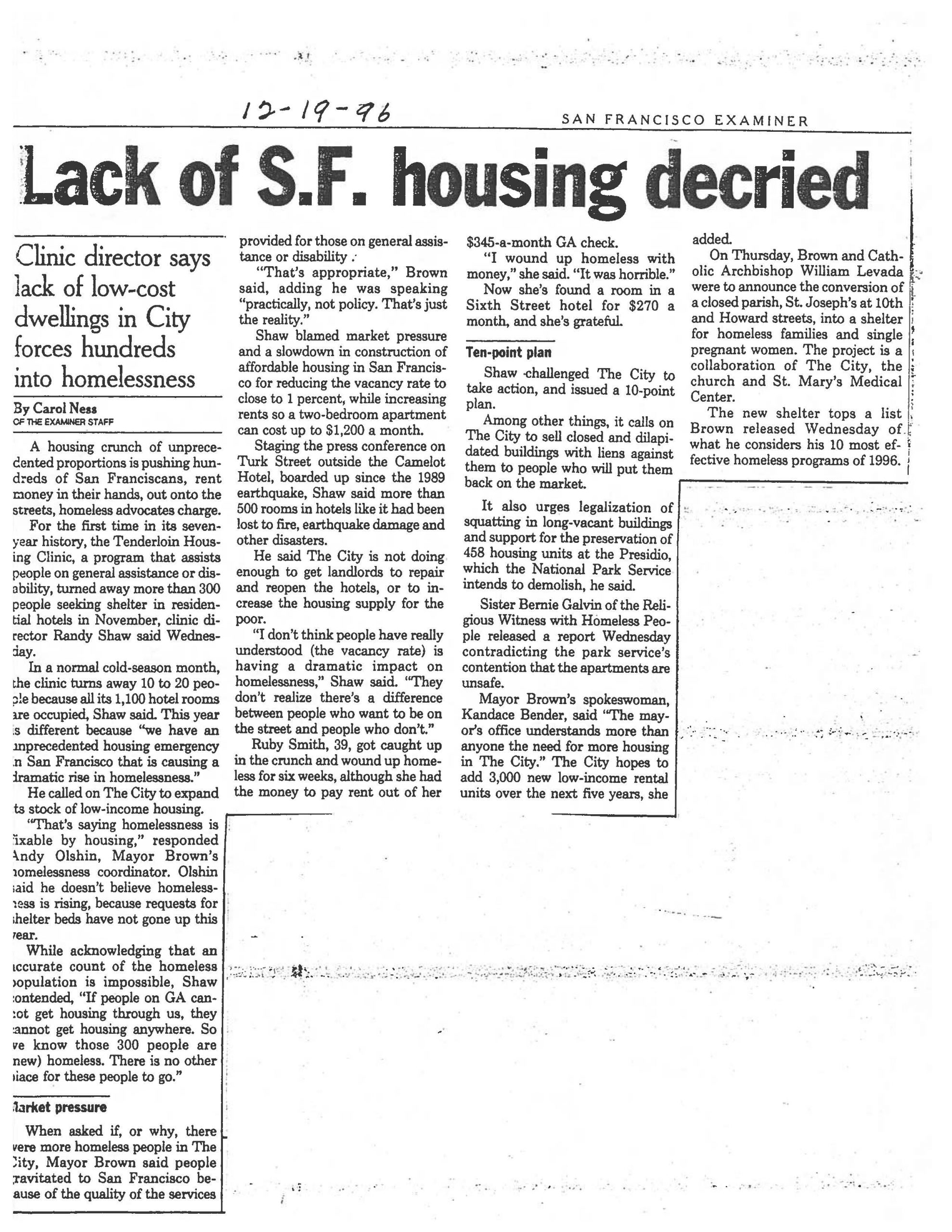 A housing crunch of unprecedented proportions is pushing hundreds of San Franciscans, rent money in their hands, out onto the streets, homeless advocates charge.

For  the first time in its seven-year history, the Tenderloin Housing Clinic, a program that assists people on general assistance or disability, turned away more than 300 people seeking shelter in residential hotels in November, clinic director Randy Shaw said Wednesday.

In a normal cold-season month, the clinic turns away 10 to 20 people because all its 1,100 hotel rooms are occupied, Shaw said. This year is different because “we have an unprecedented housing emergency in San Francisco that is causing a dramatic rise in homelessness.”

He called on The City to expand its stock of low-income housing.

“That’s saying homelessness is fixable by housing,” responded Andy Olshin, Mayor Brown’s homelessness coordinator. Olshin said he doesn’t believe homelessness is rising, because requests for shelter beds have not gone up this year.

While acknowledging that an accurate count of the homeless population is impossible, Shaw contended, “If people on GA cannot get housing anywhere. So we know those 300 people are new homeless. There is no other place for these people to go.”

When asked if, or why, there were more homeless people in The City, Mayor Brown said people gravitated to San Francisco because of the quality of the services provided for those on general assistance or disability.

Shaw blamed market pressure and a slowdown in construction of affordable housing in San Francisco for reducing the vacancy rate to close to 1 percent, while increasing rents so a two-bedroom apartment can cost up to $1,200 a month.

Staging the press conference on Turk Street outside the Camelot Hotel, boarded up since the 1989 earthquake, Shaw said more than 500 rooms in hotels like it had been lost to fire, earthquake damage and other disasters.

He said The City is not doing enough to get landlords to repair and reopen the hotels, or to increase the housing supply for the poor.

“I don’t think people have really understood (the vacancy rate) is having a dramatic impact on homelessness,” Shaw said. “They don’t realize there’s a difference between people who want to be on the street and people who don’t.’

Ruby Smith, 39, got caught up in the crunch and wound up homeless for six weeks, although she had the money to pay rent out of her $345-a-month GA check.

“I wound up homeless with money,” she said. “It was horrible.”

Now she’s found a room in a Sixth Street hotel for $270 a month, and she’s grateful.

Shaw challenged The City to take action, and issued a 10-point plan.

Among other things, it calls on The City to sell closed and dilapidated buildings with liens against them to people who will put them back on the market.

It also urges legislation of squatting in long-vacant buildings and support for the preservation of 458 housing units at the Presidio, which the National Park Service intends to demolish, he said.

Sister Bernie Galvin of the Religious Witness with Homeless People released a report Wednesday contradicting the park service’s contention that the apartments are unsafe.

Mayor Brown’s spokeswoman, Kandace Bender, said “The mayor’s office understands more than anyone the need for more housing in The City.” The City hopes to add 3,000 new low-income rental units over the next five years, she added.

On Thursday, Brown and Catholic Archbishop William Levada were to announces the conversion of a closed parish, St. Joseph’s at 10th and Howard streets, into a shelter for homeless families and single pregnant women. The project is a collaboration of The City, the church and St. Mary’s Medical Center.

The new shelter tops a list Brown released Wednesday of what he considers his 10 most effective homeless programs of 1996.