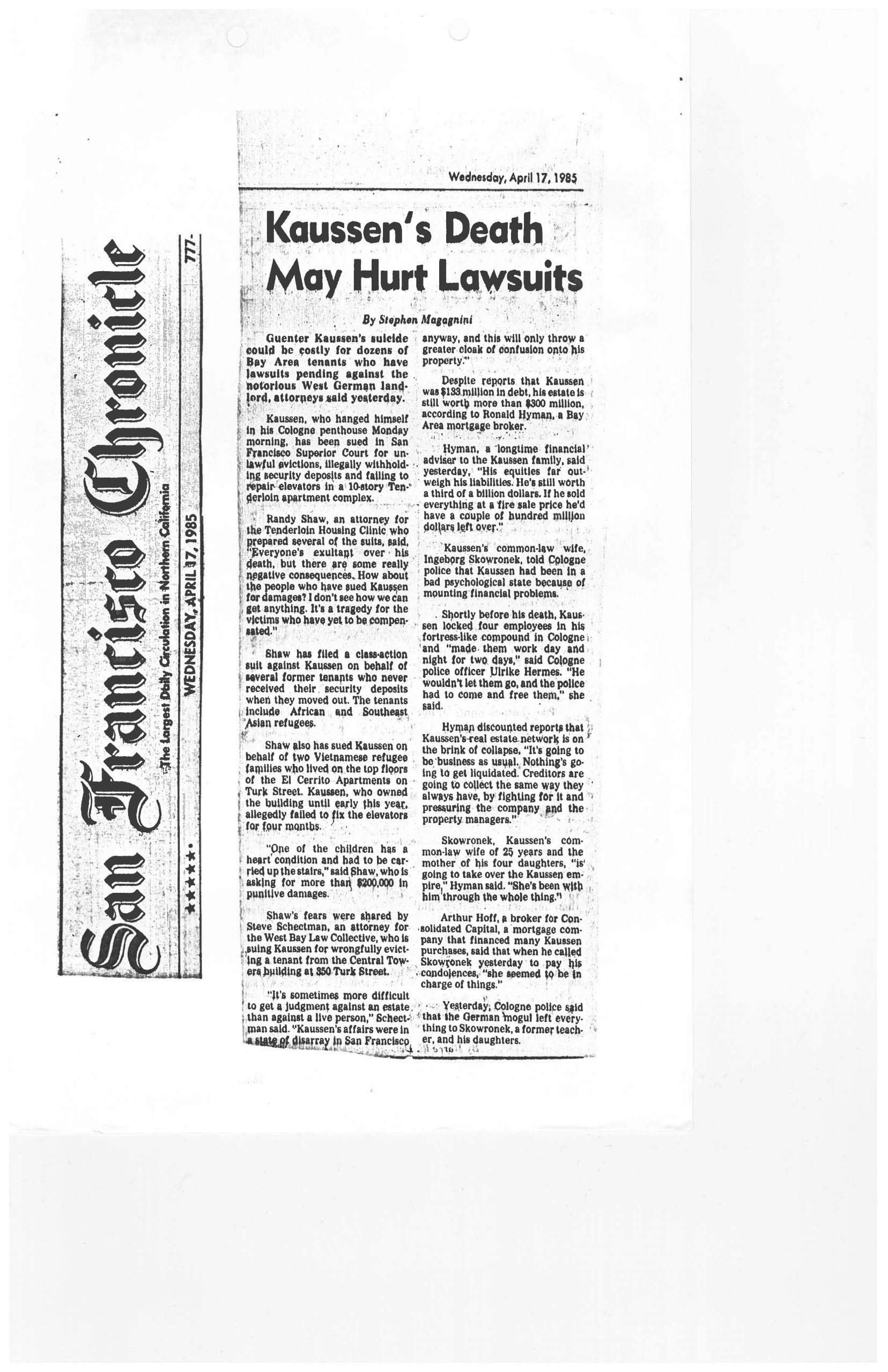 Guenter Kaussen’s suicide could be costly for dozens of Bay Area tenants who have lawsuits pending against the notorious West German landlord, attorneys said yesterday.

Kaussen, who hanged himself in his Cologne penthouse Monday morning, has been sued in San Francisco Superior Court for unlawful evictions, illegally withholding security deposits and failing to repair elevators in a 10-story Tenderloin apartment complex.

Randy Shaw, an attorney for the Tenderloin Housing Clinic who prepared several of the suits, said, “Everyone’s exultant over his death, but there are some really negative consequences. How about the people who have sued Kaussen for damages? I don’t see how we can get anything. It’s a tragedy for the victims who have yet to be compensated.”

Shaw has filed a class-action suit against Kaussen on behalf of several former tenants who never received their security deposits when they moved out. The tenants include African and Southeast Asian refugees.

Shaw also has sued Kaussen on behalf of two Vietnamese refugee families who lived on the top floors of the El Cerrito Apartments on Turk Street. Kaussen, who owned the building until early this year, allegedly failed to fix the elevators for four months.

“One of the children has a heart condition and had to be carried up the stairs,” said Shaw, who is asking for more than $200,000 in punitive damages.

Shaw’s fears were shared by Steve Schectman, an attorney for the West Bay Law Collective, who is suing Kaussen for wrongfully evicting a tenant from the Central Towers building at 350 Turk Street.

“It’s sometimes more difficult to get a judgment against an estate than against a live person,” Schectman said. “Kaussen’s affairs were in a state of disarray in San Francisco anyway, and this will only throw a greater cloak of confusion onto his property.”

Despite reports that Kaussen was $133 million in debt, his estate is still worth more than $300 million, according to Ronald Hyman, a Bay Area mortgage broker.

Hyman, a longtime financial adviser to the Kaussen family, said yesterday, “His equities far outweigh his liabilities. He’s still worth a third of a billion dollars, if he sold everything at a fire sale price he’d have a couple of hundred million dollars left over.”

Kaussen’s common-law wife, Ingeborg Skowronek, told Cologne police that Kaussen had been in a bad psychological state because of mounting financial problems.

Shortly before his death, Kaussen locked four employees in his fortress-like compound in Cologne and “made them work day and night for two days,” said Cologne police officer Ulrike Hermes. “He wouldn’t let them go, and the police had to come and free them,” she said.

Hyman discounted reports that Kaussen’s real estate network is on the brink of collapse, “It’s going to be business as usual. Nothing’s going to get liquidated. Creditors are going to collect the same way they always have, by fighting for it and pressuring the company and the property managers.”

Skowronek, Kaussen’s common-law wife of 25 years and the mother of his four daughters, “is going to take over the Kaussen empire” Hyman said. “She’s been with him through the whole thing.”

Arthur Hoff, a broker for Consolidated Capital, a mortgage company that financed many Kaussen purchases, said that when he called Skowronek yesterday to pay his condolences, “she seemed to be in charge of things.”

Yesterday, Cologne police said that the German mogul left everything to Skowrinek, a former teacher, and his daughters.