A San Francisco judge is poised to overturn a 3-month-old city ordinance that makes it harder for property owners to take their buildings off the rental market. This would leave tenants more vulnerable to eviction. 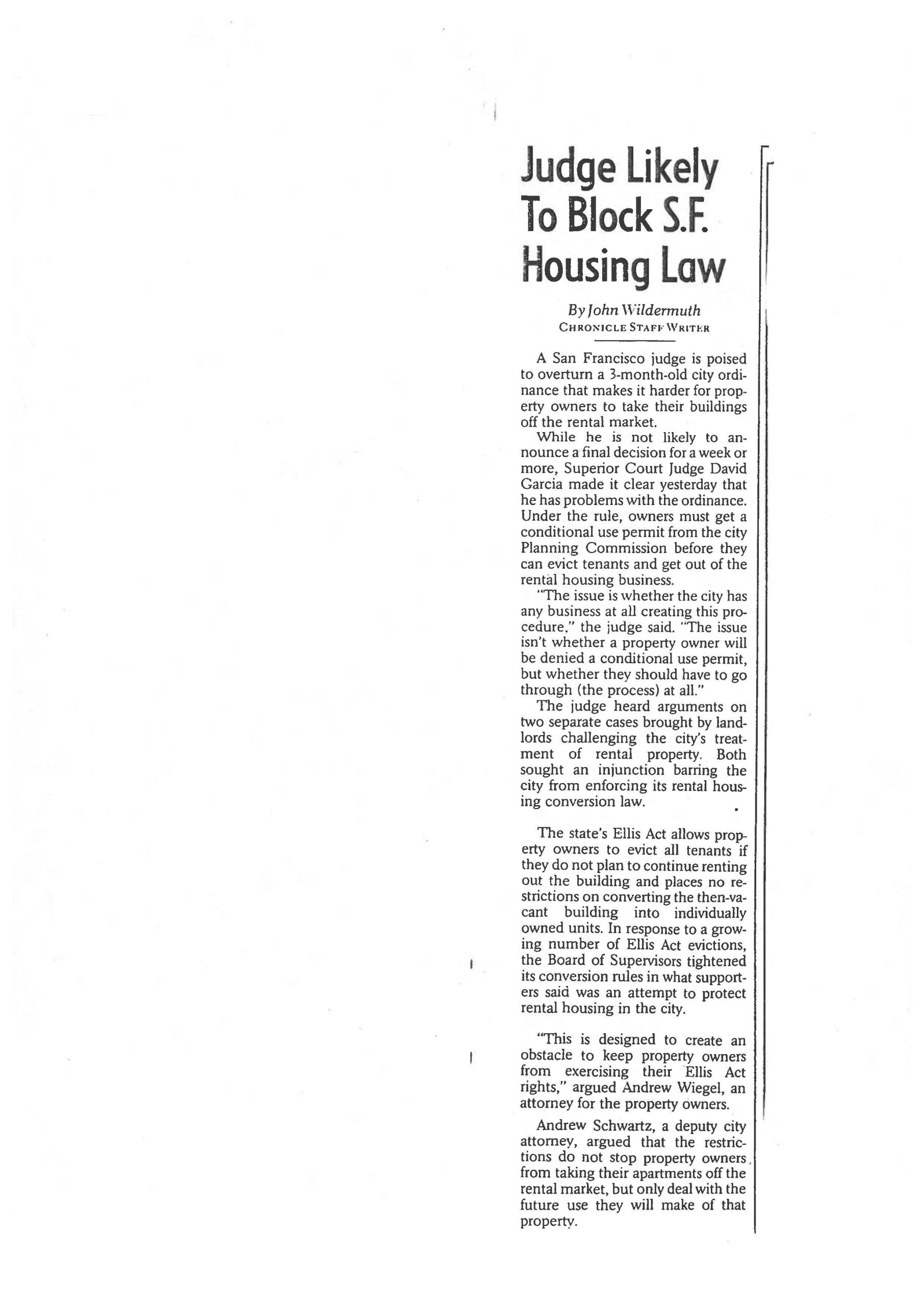 A San Francisco judge upheld the city’s revised moratorium on evicting seniors and the disabled yesterday, four months after another judge declared an earlier version of the ordinance unconstitutional.

Municipal Court Judge Harry Low ruled yesterday that Kam Yuk Chin, 74, does not have to leave the Chinatown apartment she has lived in for nearly 30 years, saying the new yearlong moratorium protects her from eviction. Her landlord had sought to move into her apartment with his girlfriend, according to his attorney.

The Board of Supervisors approved the new moratorium on evictions of disabled, older and sick tenants July 6. The ban lasts through next June.

The board had passed an 18 month moratorium in December, but Superior Court Judge Raymond Williamson ruled April 3 that the city was taking property from landowners without due process.

So Supervisors Sue Bierman and Tom Ammiano, the ban’s sponsors, amended the ordinance to require that renters inform landlords that they are protected by the ordinance before an attempted eviction.

The ban protects those over age 60 and the disabled who have lived in their units for at least 10 years from evictions by landlords who want to move in themselves or move in family members. It also covers tenants with AIDS or other catastrophic illnesses who have lived in a unit for five years.

The moratorium applies to buildings of two units or more.

“We finally got a judge who understands the law,” said Randy Shaw, director of the Tenderloin Housing Clinic. “I think it’s a big victory.”

Shaw’s group supports a November ballot measure that would limit owner move-in evictions. It would permanently ban such evictions of the elderly and disabled.

Gen Fujioka, an attorney with the Asian Law Caucus, said the 74 year-old Chin would have been thrown into the street without the eviction ban.

“She had no place else to go,” said Fujioka, whose group represented Chin. “This is the only home she had resided in in the United States.”

Opponents of the moratorium were confident that the ruling will be overturned.

Far from throwing her out on the street, Nolan had offered $10,000 to Chin to leave the two unit building on Grant Avenue, MacDonald said. In this case, he added, the landlord is the one being hurt.

“My client and his girlfriend have been living in the back of a warehouse for five years to save the money to buy their little place,” MacDonald said.

Janan New, director of the San Francisco Apartment Association, which represents building owners, said her organization would fight to overturn the decision.

“It’s just one Municipal Court judge’s decision and it’s not binding,” New said. “If it’s taken to another court, it will be found to be unconstitutional.”