Judge orders Bureau of Building Inspection to meet code enforcement deadlines. A win for tenants and their advocacy groups. 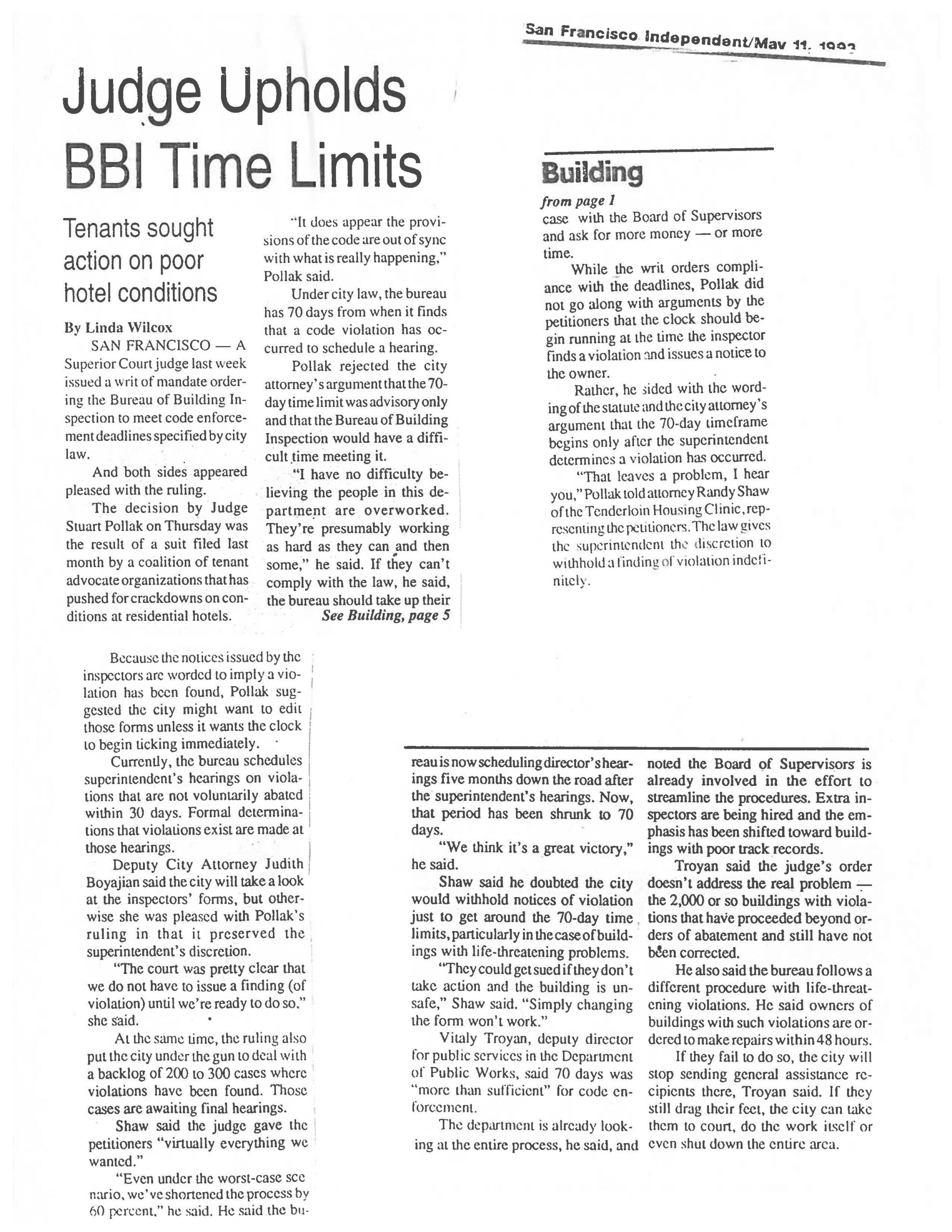 And both sides appeared pleased with the ruling.

The decision by Judge Stuart Pollak on Thursday was the result of a suit filed last month by a coalition of tenant advocate organizations that has pushed for crackdowns on conditions at residential hotels.

“It does appear the provisions of the code are out of sync with what is really happening,” Pollak said.

Under city law, the bureau has 70 days from when it finds that a code violation has occurred to schedule a hearing.

Pollak rejected the city attorney’s argument that the 70-day time limit was advisory only and that the Bureau of Building Inspection would have a difficult time meeting it.

“I have no difficulty believing the people in this department are overworked. They’re presumably working as hard as they can and then some,” he said. If they can’t comply with the law, he said, the bureau should take up their case with the Board of Supervisors and ask for more money — or more time.

While the writ orders compliance with the deadlines, Pollak did not go along with arguments by the petitioners that the clock should begin running at the time the inspector finds a violation and issues a notice to the owner.

Rather, he sided with the wording of the statute and the city attorney’s argument that the 70-day timeframe begins only after the superintendent determines a violation has occurred.

“That leaves a problem, I hear you,” Pollak  told attorney Randy Shaw of the Tenderloin Housing Clinic, representing the petitioners. The law gives the superintendent the discretion to withhold a finding of violation indefinitely.

Because the notices issued by the inspectors are worded to imply a violation has been found, Pollak suggested the city might want to edit those forms unless it wants the clock to begin ticking immediately..

Currently, the bureau schedules superintendent’s hearings on violations that are not voluntarily abated within 30 days. Formal determinations that violations exist are made at those hearings.

Deputy City Attorney Judith Boyajian said the city will take a look at the inspectors’ forms, but otherwise she was pleased with Pollak’s ruling in that it preserved the superintendent’s discretion.

“The court was pretty clear that we do not have to issue a finding (of violation) until we’re ready to do so.” she said.

At the same time, the ruling also put the city under the gun to deal with a backlog of 200 to 300 cases where violations have been found. Those cases are awaiting final hearings.

Shaw said the judge gave the petitioners “virtually everything we wanted.”

“Even under the worst-case scenario, we’ve shortened the process by 60 percent,” he said. He said the bureau is now scheduling director’s hearings five months down the road after the superintendent’s hearings. Now, that period has been shrunk to 70 days.

“We think it’s a great victory,” he said.

Shaw said he doubted the city would withhold notices of violation just to get around the 70-day time limits, particularly in the case of buildings with life-threatening problems.

“They could get sued if they don’t take action and the building is unsafe,” Shaw said. “Simply changing the form won’t work.”

Vitaly Tryan, deputy director for public services in the Department of Public Works, said 70 days was “more than sufficient” for code enforcement.

The department is already looking at the entire process, he said and noted the Board of Supervisors is already involved in the effort to streamline the procedures. Extra inspectors are being hired and the emphasis has been shifted toward buildings with poor track records.

Troyan said the judge’s order doesn’t address the real problem – the 2,000 or so buildings with violations that have proceeded beyond orders of abatement and still have not been corrected.

He also said the bureau follows a different procedure with life-threatening violations. He said owners of buildings with such violations are ordered to make repairs within 48 hours.

If they fail to do so, the city will stop sending general assistance recipients there, Troyan said. If they still drag their feet, the city can take them to court, do the work itself or even shut down the entire area.