The San Francisco city attorney’s office is called in to sort out a dispute between the city’s Bureau of Building Inspection and the Tenderloin Housing Clinic, who accused the BBI of throwing away public documents related to unsafe rental property. 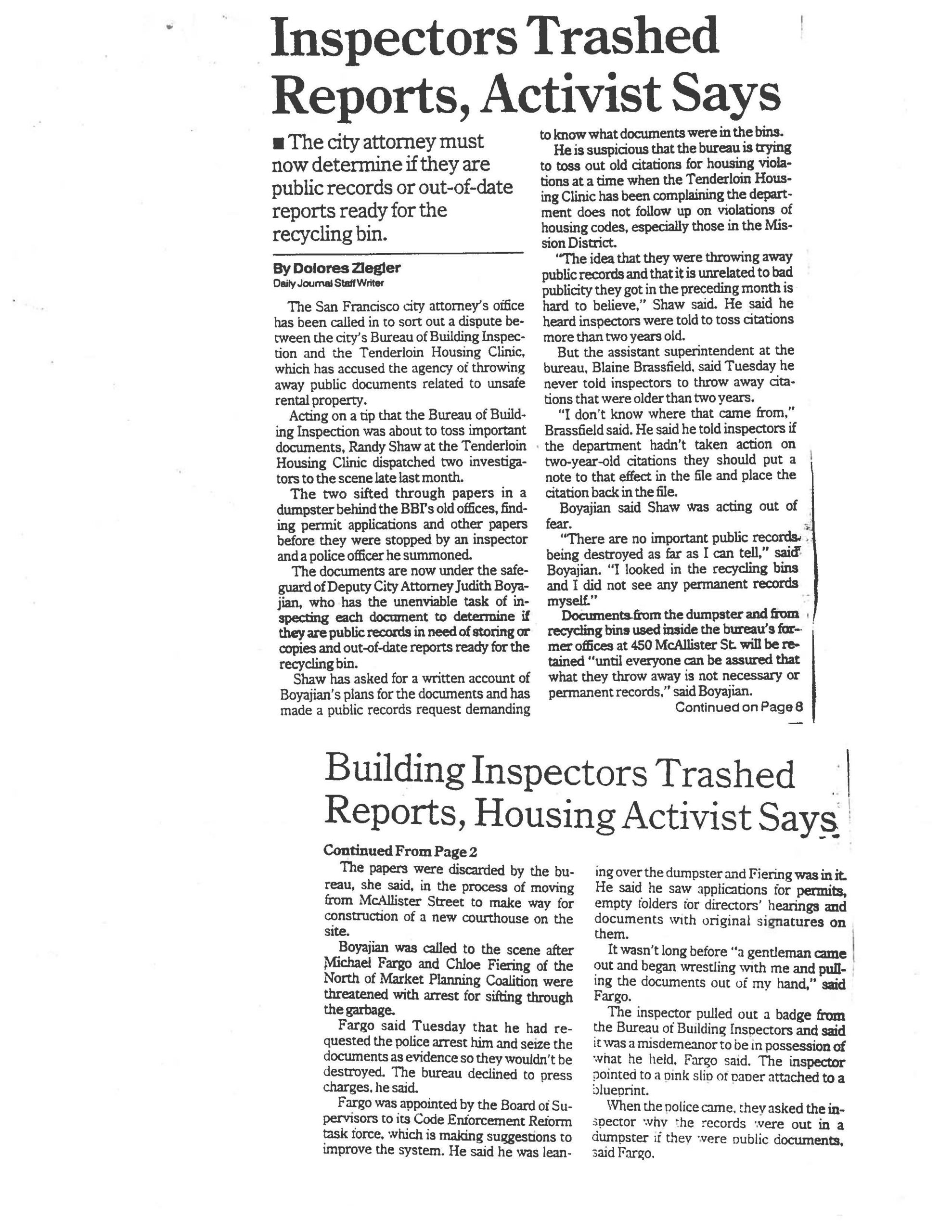 Inspectors Trashed Reports, Activist Says
The city attorney must now determine if they are public records or out-of-date reports ready for the recycling bin.

The San Francisco city attorney’s office has been called in to sort out a dispute between the city’s Bureau of Building Inspection and the Tenderloin Housing Clinic, which has accused the agency of throwing away public documents related to unsafe rental property.

Acting on a tip that the Bureau of Building Inspection was about to toss important documents, Randy Shaw at the Tenderloin Housing Clinic dispatched two investigators to the scene late last month.

The two sifted through papers in a dumpster behind the BBI’s old offices, finding permit applications and other papers before they were stopped by an inspector and a police officer he summoned.

The documents are now under the safeguard of Deputy City Attorney Judith Boyajian, who has the unenviable task of inspecting each document to determine if they are public records in need of storing or copies and out-of-date reports ready for the recycling bin.

Shaw has asked for a written account of Boyajian’s plans for the documents and has made a public records request demanding to know what documents were in the bins.

He is suspicious that the bureau is trying to toss out old citations for housing violations at a time  when the Tenderloin Housing Clinic has been complaining the department does not follow up on violations of housing codes, especially those in the Mission District.

“The idea that they were throwing away public records and that it is unrelated to bad publicity they got in the preceding month is hard to believe,” Shaw said. He said he heard inspectors were told to toss citations more than two years old.

But the assistant superintendent at the bureau, Blaine Brassfield, said Tuesday he never told inspectors to throw away citations that were older than two years.

“I don’t know where that came from,” Brassfield said. He said he told inspectors if the department hadn’t taken action on two-year-old citations they should put a note to that effect in the file and place the citation back in the file.

Boyajian said Shaw was acting out of fear.

“There are no important public records being destroyed as far as I can tell,” said Boyajian.”I looked in the recycling bins and I did not see any permanent records myself.”

Documents from the dumpster and from recycling bins used inside the bureau’s former offices at 450 McAllister St. will be retained “until everyone can be assured that what they throw away is not necessary or permanent records,” said Boyajian.

The papers were discarded by the bureau, she said, in the process of moving from McAllister Street to make way for construction of a new courthouse on the site.

Boyajian was called to the scene after Michael Fargo and Chloe Fiering of the North of Market Planning Coalition were threatened with arrest for sifting through the garbage.

Fargo said Tuesday that he had requested the police arrest him and seize the documents as evidence so they wouldn’t be destroyed. The bureau declined to press charges, he said.

Fargo was appointed by the Board of Supervisors to its Code Enforcement Reform task force, which is making suggestions to improve the system. He said he was leaning over the dumpster and Fiering was in it. He said he saw applications for permits, empty folders for directors’ hearings and documents with original signatures on them.

It wasn’t long before “a gentleman came out and began wrestling with me and pulling the documents out of my hand,” said Fargo.

The inspector pulled out a badge from the Bureau of Building Inspectors and said it was a misdemeanor to be in possession of what he held. Fargo said, The inspector pointed to a pink slip of paper attached to a blueprint.

When the police came, they asked the inspector why the records were out in a dumpster if they were public documents, said Fargo.