The Building Inspection Commission, created in 1995 by the passage of Proposition G, begins its work to properly tackle building code enforcement. 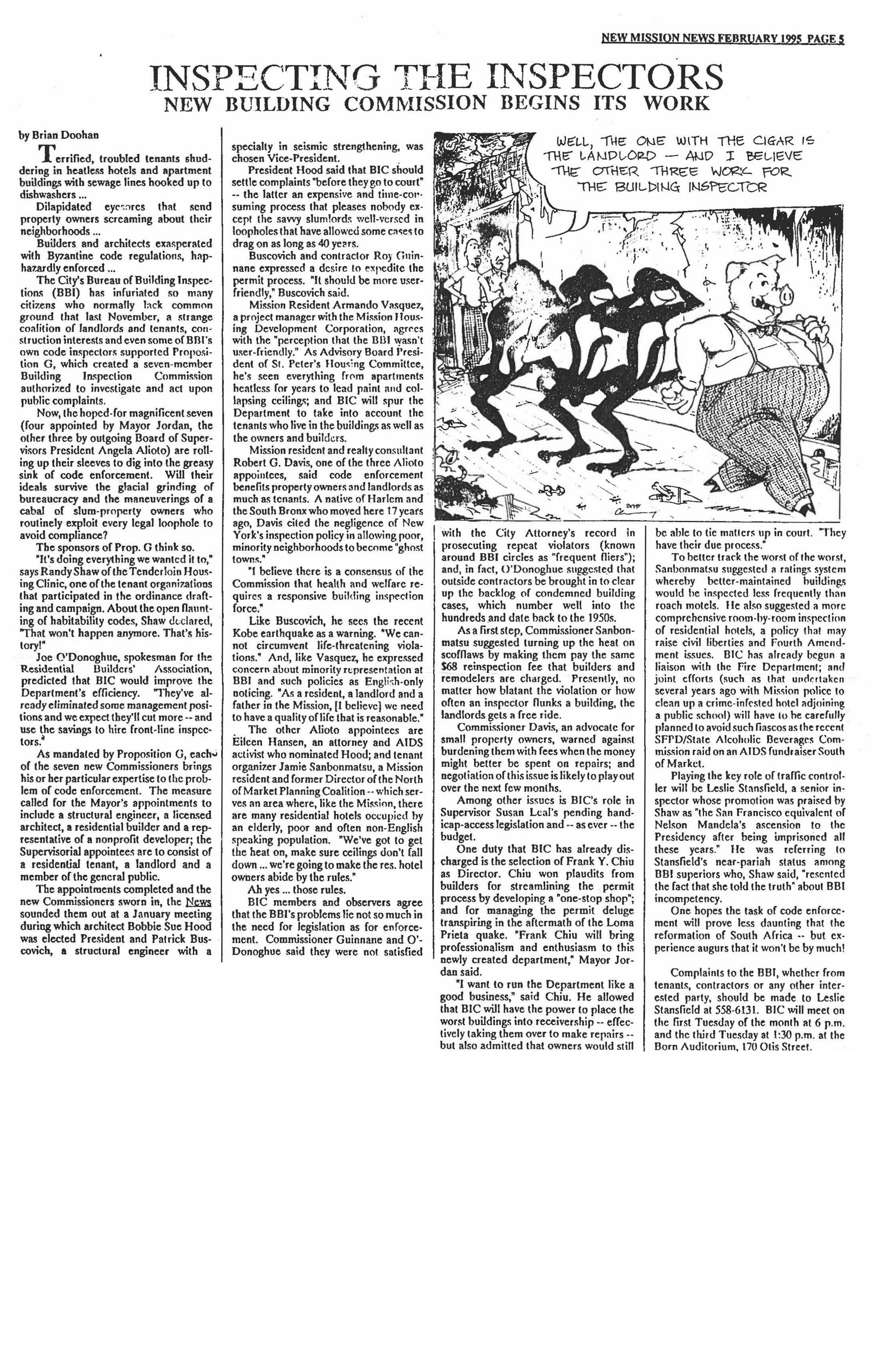 Dilapidated eyesores that send property owners screaming about their neighborhoods …

The City’s Bureau of Building Inspections (BBI) has infuriated so many citizens who normally lack common ground that last November, a strange coalition of landlords and tenants, construction interests and even some of BBI’s own code inspectors supported Proposition G, which created a seven-member Building Inspection Commission authorized to investigate and act upon public complaints.

Now, the hoped for magnificent seven (four appointed by Mayor Jordan, the other three by outgoing Board of Supervisors President Angela Alioto) are rolling up their sleeves to dig into the greasy sink of code enforcement. Will their ideals survive the glacial grinding of bureaucracy and the maneuverings of a cabal of slum-property owners who routinely exploit every legal loophole to avoid compliance?

The sponsors of Prop. G think so.

“It’s doing everything we wanted it to,” says Randy Shaw of the Tenderloin Housing Clinic, one of the tenant organizations that participated in the ordinance drafting and campaign. About the open slaunting of habitability codes, Shaw declared, “That won’t happen anymore. That’s history!”

Joe O’Donoghue, spokesman for the Residential Builders’ Association, predicted that BIC would improve the Department’s efficiency. “They’ve already eliminated some management positions and we expect they’ll cut more– and use the savings to hire front-line inspectors.”

As mandated by Proposition G, each of the seven new Commissioners brings his or her particular expertise to the problem of code enforcement. The measure called for the Mayor’s appointments to include a structural engineer, a licensed architect, a residential builder and a representative of a nonprofit developer; the Supervisorial appointees are to consist of a residential tenant, a landlord and a member of the general public.

The appointments completed and the new Commissioners sworn in, the News sounded them out at a January meeting during which architect Bobbie Sue Hood was elected President and Patrick Buscovich, a structural engineer with a specialty in seismic strengthening, was chosen Vice-President.

President Hood said that BIC should settle complaints “before they go to court”– the latter an expensive and time-consuming process that pleases nobody except the savvy slumlords well-versed in loopholes that have allowed some cases to drag on as long as 40 years.

Buscovich and contractor Roy Guinnane expressed a desire to expedite the permit process. “It should be more user-friendly,” Buscovich said.

Mission Resident Armando Vasquez, a project manager with the Mission Housing Development Corporation, agrees with the perception that the BBI wasn’t user-friendly.” As Advisory Board President of St. Peter’s Housing Committee, he’s seen everything from apartments heatless for years to lead paint and collapsing ceilings, and BIC will spur the Department to take into account the tenants who live in the buildings as well as the owners and builders.

Mission resident and realty consultant Robert G. Davis, one of the three Alioto appointees, said code enforcement benefits property owners and landlords as much as tenants. A native of Harlem and the South Bronx who moved here 17 years ago, Davis cited the negligence of New York’s inspection policy in allowing poor, minority neighborhoods  to become “ghost towns.”

“I believe there is a consensus of the Commission that health and welfare requires a responsive building inspection force.”

Like Buscovish, he sees the recent Kobe earthquake as a warning. “We cannot circumvent life-threatening violations.” And, like Vasquez, he expressed concern about minority representation at BBI and such policies as English-only noticing. “As a resident, a landlord and a father in the Mission, [I believe] we need to have a quality of life that is reasonable.”

The other Alioto appointees are Eileen Hansen, an attorney and AIDS activities who nominated Hood; and tenant organizer Jamie Sanbonmatsu, a Mission resident and former Director of the North of Market Planning Coalition–which serves an area where, like the Mission, there are many residential hotels occupied by an elderly, poor and often non-English speaking population. “We’ve got to get the heat on, make sure ceilings don’t fall down…we’re going to make the res. hotel owners abide by the rules.”

BIC members and observers agree that the BBI’s problems lie not so much in the need for legislation as for enforcement. Commission Guinnane and O’Donoghue said they were not satisfied with the City Attorney’s record in prosecuting repeat violators (known around BBI circles as “frequent fliers”); and, in fact, O’Donoghue suggested that outside contractors be brought in to clear up the backlog of condemned building cases, which number well into the hundreds and date back to the 1950s.

As a first step, Commissioner Sanbonmatsu suggested turning up the heat on scofflaws by making them pay the same $68 reinspection fee that builders and remodelers are charged. Presently, no matter how blatant the violation or how often an inspector flunks a building, the landlords get a free ride.

Commissioner Davis, an advocate for small property owners, warned against burdening them with fees when the money might better be spent on repairs; and negotiation of this issue is likely to play out over the next few months.

Among other issues is BIC’s role in Supervisor Susan Leal’s pending handicap-access legislation and –as ever–the budget.

One duty that BIC has already discharged is the selection of Frank Y. Chiu as Director. Chiu won plaudits from builders for streamline the permit process by developing a “one-stop shop”; and for managing the permit deluge transpiring in the aftermath of the Loma Prieta quake. “Frank Chiu will bring professionalism and enthusiasm to this newly created department,” Mayor Jordan said.

“I want to run the Department like a good business,” said Chiu. He allowed that BIC will have the power to place the worst buildings into receivership–effectively taking them over to make repairs–but also admitted that owners would still be able to tie matters up in court. “They have their due process.”

To better track the worst of the worst. Sonbonmatsu suggested a ratings system whereby better-maintained buildings would be inspected less frequently than roach motels. He also suggested a more comprehensive room-by-room inspection of residential hotels, a policy that may raise civil liberties and Fourth Amendment issues. BIC has already begun a liaison with the Fire Department; and join efforts (such as that undertaken several years ago with Mission police to clean up a crime-infested hotel adjoining a public school) will have to be carefully planned to avoid such fiascos as the recent SFPD/State Alcoholic Beverages Commission raid on an AIDS fundraiser South of Market.

Playing the key role of traffic controller will be Leslie Stansfield, a senior inspector whose promotion was praised by Shaw as “the San Francisco equivalent of Nelson Mandela’s ascension to the Presidency after being imprisoned all these years.” He was referring to Stansfield’s near-pariah status among BBI Superiors who, Shaw said, “resented the fact  that she told the truth” about BBI incompetency.

One hopes the task of code enforcement will prove less daunting than the reformation of South Africa–but experience augurs that it won’t be by much!

Complaints to the BBI, whether from tenants, contractors or any other interested party, should be made to Leslie Stansfied at 558-6131. BIC will meet on the first Tuesday of the month at 6 p.m. and the third Tuesday at 1:30pm at the Born Auditorium, 170 Otis Street.