The owner of the All Seasons Hotel is accused of skirting hotel replacement law by not paying the fee required for converting 74 of the building’s units to tourist use. 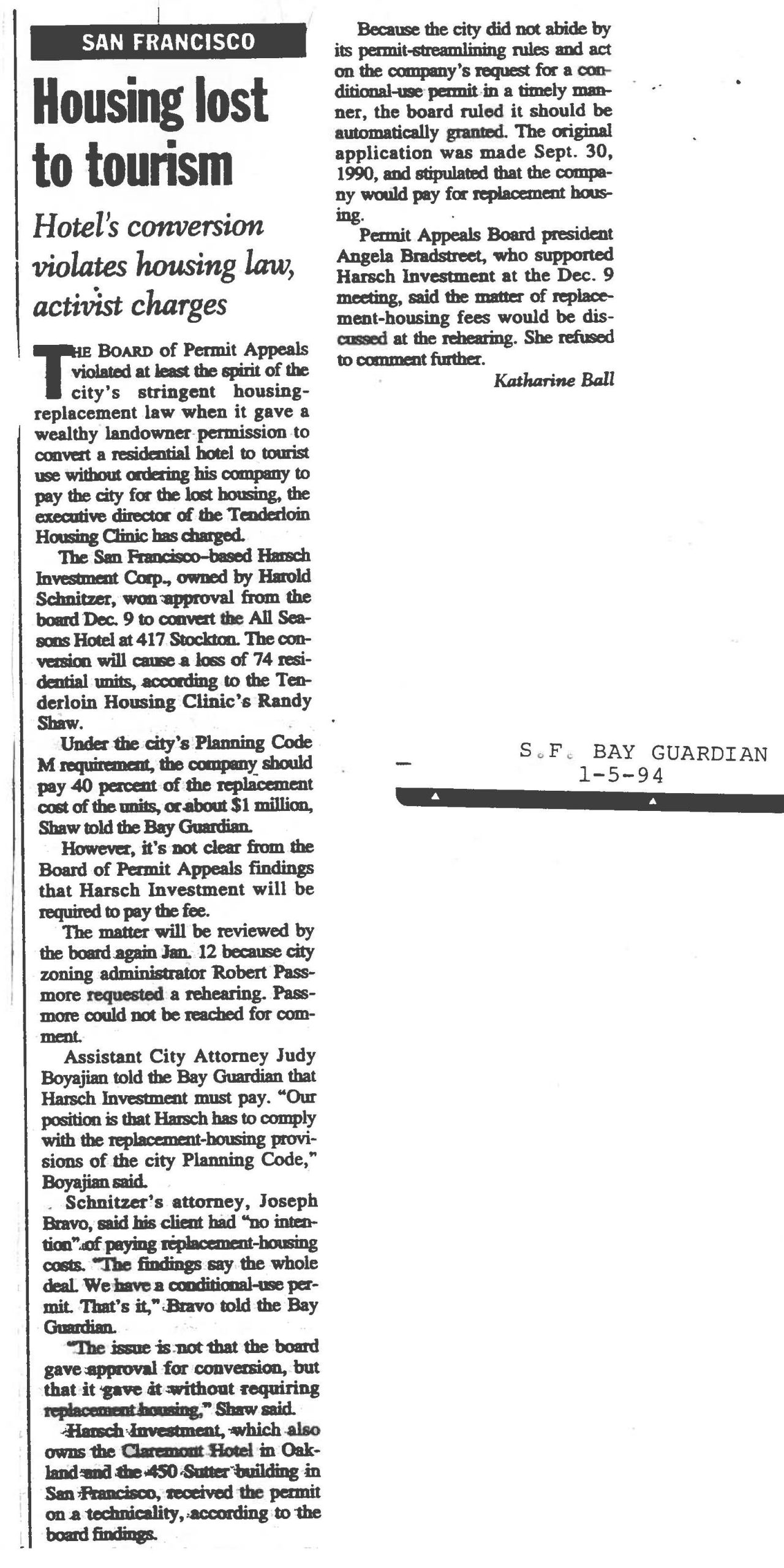 The Board of Permit Appeals violated at least the spirit of the city’s stringent housing replacement law when it gave a wealthy landowner permission to convert a residential hotel to tourist use without ordering his company to pay the city for the lost housing, the executive director of the Tenderloin Housing Clinic has charged. The San Francisco-based Harsch investment Corp., owned by Harold Schnitzer, won approval from the board Dec. 9 to convert the All Seasons Hotel at 417 Stockton. The conversion will cause a loss of 74 residential units, according to the Tenderloin Housing Clinic’s Randy Shaw.

Under the city’s Planning Code M requirement, the company should pay 40 percent of the replacement cost of the units, or about $1 million, Shaw told the Bay Guardian. However, it’s not clear from the Board of Permit Appeals findings that Harsch Investment will be required to pay the fee. The matter will be reviewed by the board again Jan 12 because city zoning administrator Robert Passmore requested a rehearing. Passmore could not be reached for comment.

Assistant City Attorney Judy Boyajian told the Bay Guardian that Harsch Investment must pay. “Our position is that Harsch has to comply with the replacement-housing provisions of the city Planning Code,” Boyajian said.

Schnitzer’s attorney, Joseph Bravo, said his client had no intention “of paying replacement-housing costs. The findings say the whole deal. We gave a conditional-use permit. That’s it,” Bravo told the Bay Guardian.

“The issue is not that the board gave approval for conversion, but that it gave it without requiring replacement housing,” Shaw said.

Harsch Investment, which also owns the Claremont Hotel in Oakland and the 450 Sutter building in San Francisco, received the permit on a technicality, according to the board findings.

Because the city did not abide by its permit-streamlining rules and act on the company’s request for a conditional use permit in a timely manner, the board ruled it should be automatically granted. The original application was made Sept. 30, 1990, and stipulated that the company would pay for replacement housing.

Permit Appeals Board president Angela Bradstreet, who supported Harsch Investment at the Dec. 9 meeting, said the matter of replacement-housing fees would be discussed at the rehearing. She refused to comment further.