“Use the money generated by housing for housing,” said THC’s Executive Director, Randy Shaw, in a 2000 interview. Randy echoed the voices of other housing advocates proposing the use of the $5 billion FHA surplus to build affordable housing. 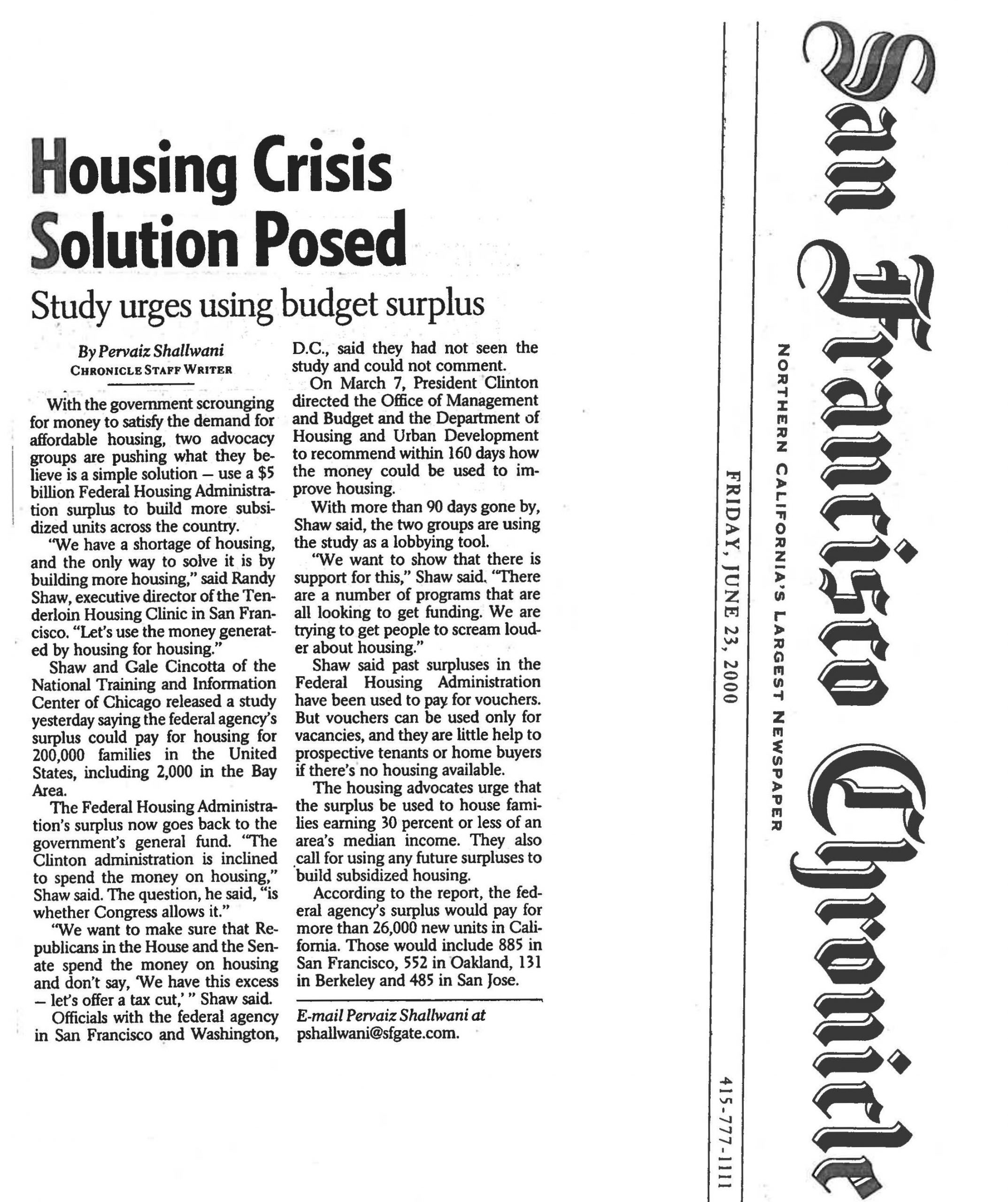 With the government scrounging for money to satisfy the demand for affordable housing, two advocacy groups are pushing what they believe is a simple solution – use a $5 billion Federal Housing Administration surplus to build more subsidized units across the country.

“We have a shortage of housing, and the only way to solve it is by building more housing,” said Randy Shaw, executive director of the Tenderloin Housing Clinic in San Francisco. “ Let’s use the money generated by housing for housing.”

Shaw and Gale Cincotta of the National Training and Information Center of Chicago released a study yesterday saying the federal agency’s surplus could pay for housing for 200,000 families  in the United States, including 2,000 in the Bay Area.

The Federal Housing Administration’s surplus now goes back to the government’s general fund. “The Clinton administration is inclined to spend the money on housing,” Shaw said. The question, he said, “is whether Congress allows it.”

“We want to make sure that Republicans in the House and the Senate spend the money on housing and don’t say, ‘We have this excess – let’s offer a tax cut,'” Shaw said.

Officials with the federal agency in San Francisco and Washington, D.C., said they had not seen the study and could not comment. On March 7, President Clinton directed the Office of Management and Budget and the Department to recommend within 160 days how the money could be used to improve housing.

With more than 90 days gone by, Shaw said, the two groups are using the study as a lobbying tool. “We want to show that there is support for this,” Shaw said. “There are a number of programs that are all looking to get funding. We are trying to get people to scream louder about housing.”

Shaw said past surpluses in the Federal Housing Administration have been used to pay for vouchers. But vouchers can be used only for vacancies, and they are little help to prospective tenants or home buyers if there’s no housing available.

The housing advocates urge that the surplus be used to house families earning 30 percent or less of an area’s median income. They also call for using any future surpluses to build subsidizing housing.

According to the report, the federal agency’s surplus would pay for more than 26,000 new units in California. Those would include 885 in San Francisco, 552 in Oakland, 131 in Berkeley and 485 in San Jose.