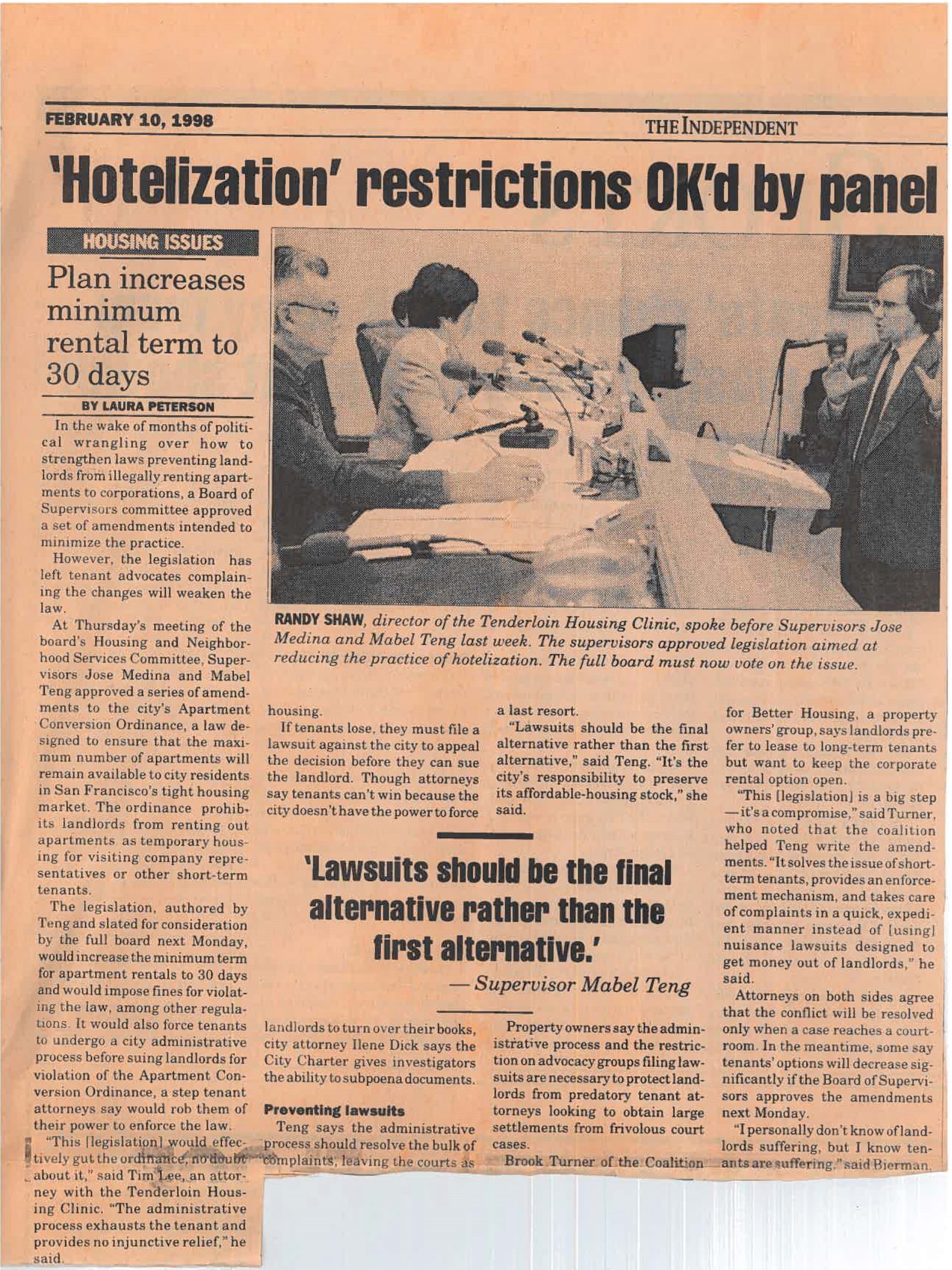 In the wake of months of political wrangling over how to strengthen laws preventing landlords from illegally renting apartments to corporations, a Board of Supervisors committee approved a set of amendments intended to minimize the practice.

However, the legislation has left tenant advocates complaining the changes will weaken the law.

At Thursday’s meeting of the board’s Housing and Neighborhood Services Committee, Supervisors Jose Medina and Mabel Teng approved a series of amendments to the city’s Apartment Conversion Ordinance, a law designed to ensure that the maximum number of apartments will remain available to city residents in San Francisco’s tight housing market. The ordinance prohibits landlords from renting out apartments as temporary housing for visiting company representatives or other short-term tenants.

The legislation, authored by Teng and slated for consideration by the full board next Monday, would increase the minimum term for apartment rentals to 30 days and would impose fines for violating the law, among other regulations. It would also force tenants to undergo a city administrative process before suing landlords for violation of the Apartment Conversion Ordinance, a step tenant attorneys say would rob them of their power to enforce the law.

“This [legislation] would effectively gut the ordinance, no doubt about it,” said Tim Lee, an attorney with the Tenderloin Housing Clinic. “The administrative process exhausts the tenant and provides no injunctive relief” he said.

If tenants lose, they must file a lawsuit against the city to appeal the decision before they can sue the landlord. Though attorneys say tenants can’t win because the city doesn’t have the power to force landlords to turn over their books, city attorney Ilene Dick says the City Charter gives investigators the ability to subpoena documents.

Teng says the administrative process should resolve the bulk of complaints, leaving the courts as a last resort.

“Lawsuits should be the final alternative rather than the first alternative,” said Teng. “It’s the city’s responsibility to preserve its affordable-housing stock,” she said.

Brook Turner of the Coalition for Better Housing, a property owners’ group, says landlords prefer to lease to long-term tenants but want to keep the corporate rental option open.

“This [legislation] is a big step — it’s a compromise,” said Turner, who noted that the coalition helped Teng write the amendments. “It solves the issue of short-term tenants, provides an enforcement mechanism, and takes care of complaints in a quick, expedient manner instead of [using] nuisance lawsuits designed to get money out of landlords,” he said.

Attorneys on both sides agree that the conflict will be resolved only when a case reaches a court-room. In the meantime, some say tenants’ options will decrease significantly if the Board of Supervisors approves the amendments next Monday.

“I personally don’t know of landlords suffering, but I know tenants are suffering,” said Bierman.