In a victory for affordable housing advocates, the SF Board of Supervisors rejected a bid for hotels to carve an exemption from a financial provision in a controversial housing ordinance. Leaving owners responsible to pay a conversion fee. 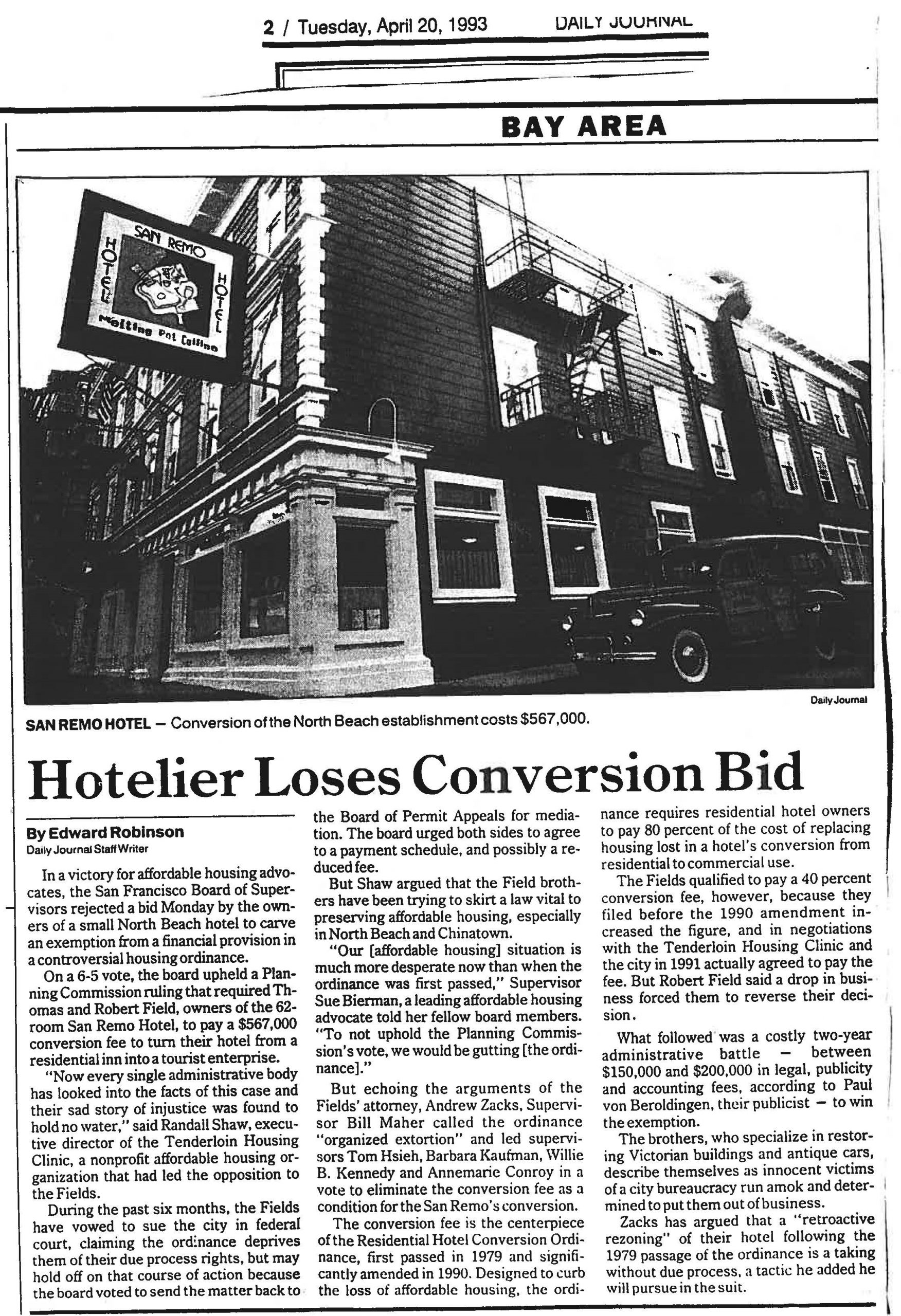 In a victory for affordable housing advocates, the San Francisco Board of Supervisors rejected a bid Monday by the owners of a small North Beach hotel to carve an exemption from a financial provision in a controversial housing ordinance.

On a 6-5 vote, the board upheld a Planning Commission ruling that required Thomas and Robert Field, owners of the 62 room San Remo Hotel, to pay a $567,000 conversion fee to turn their hotel from a residential inn into a tourist enterprise.

“Now every single administrative body has looked into the facts of this case and their sad story of injustice was found to hold no water,” said Randall Shaw, executive director of the Tenderloin Housing Clinic, a non profit affordable housing organization that had led the opposition to the Fields.

During the past six months, the Fields have vowed to sue the city in federal court, claiming the ordinance deprives them of their due process rights, but may hold off on that course of action because the board voted to send the matter back to the Board of Permit Appeals for media- tion. The board urged both sides to agree to pay 80 percent of the cost of replacing to a payment schedule, and possibly a reduced fee.

But Shaw argued The Field brothers have been trying to skirt a law vital to preserve affordable housing, especially North Beach and Chinatown.

“Our (affordable housing) situation is much more desperate now than when the ordinance was first passed,” Supervisor Sue Bierman, a leading affordable housing advocate, told her fellow board members. “To not uphold the Planning Commission’s vote, we would be gutting [the ordinance].”

But echoing the arguments of the Fields’ attorney, Andrew Zacks, Supervisor Bill Maher called the ordinance “organized extortion” and led supervisors Tom Hsieh, Barbara Kaufman, Willie B. Kennedy and Annemarie Conroy in a vote to eliminate the conversion.

The conversion fee is the centerpiece of the Residential Hotel Conversion Ordinance, first passed in 1979 and significantly amended in 1990. Designed to curb the loss of affordable housing, the ordinance requires residential hotel owners to pay 80 percent of the cost of replacing housing lost in a hotel’s conversion from residential to commercial use.

The Fields qualified to pay a 40 percent conversion fee, however, because they filed before the 1990 amendment increased the figure, and in negotiations with the Tenderloin Housing Clinic and the city in 1991 actually agreed to pay the fee. But Robert Field said a drop in business forced them to reverse their decision.

What followed was a costly two-year administrative battle – between $150,000 and $200,000 in legal, publicity and accounting fees, according to Paul von Beroldingen, their publicist – to win the exemption.

The brothers, who specialize in restoring Victorian buildings and antique cars, describe themselves as innocent victims of a city bureaucracy run amok and determined to put them out of business.

Zacks has argued that a “retroactive rezoning” of their hotel following the 1979 passage of the ordinance is a taking without due process, a tactic he added he will pursue in the suit.