Revised legislation to eliminate absolute restrictions on visitors of residential hotels.
The legislation requires a compromise from both tenants and hotel owners. 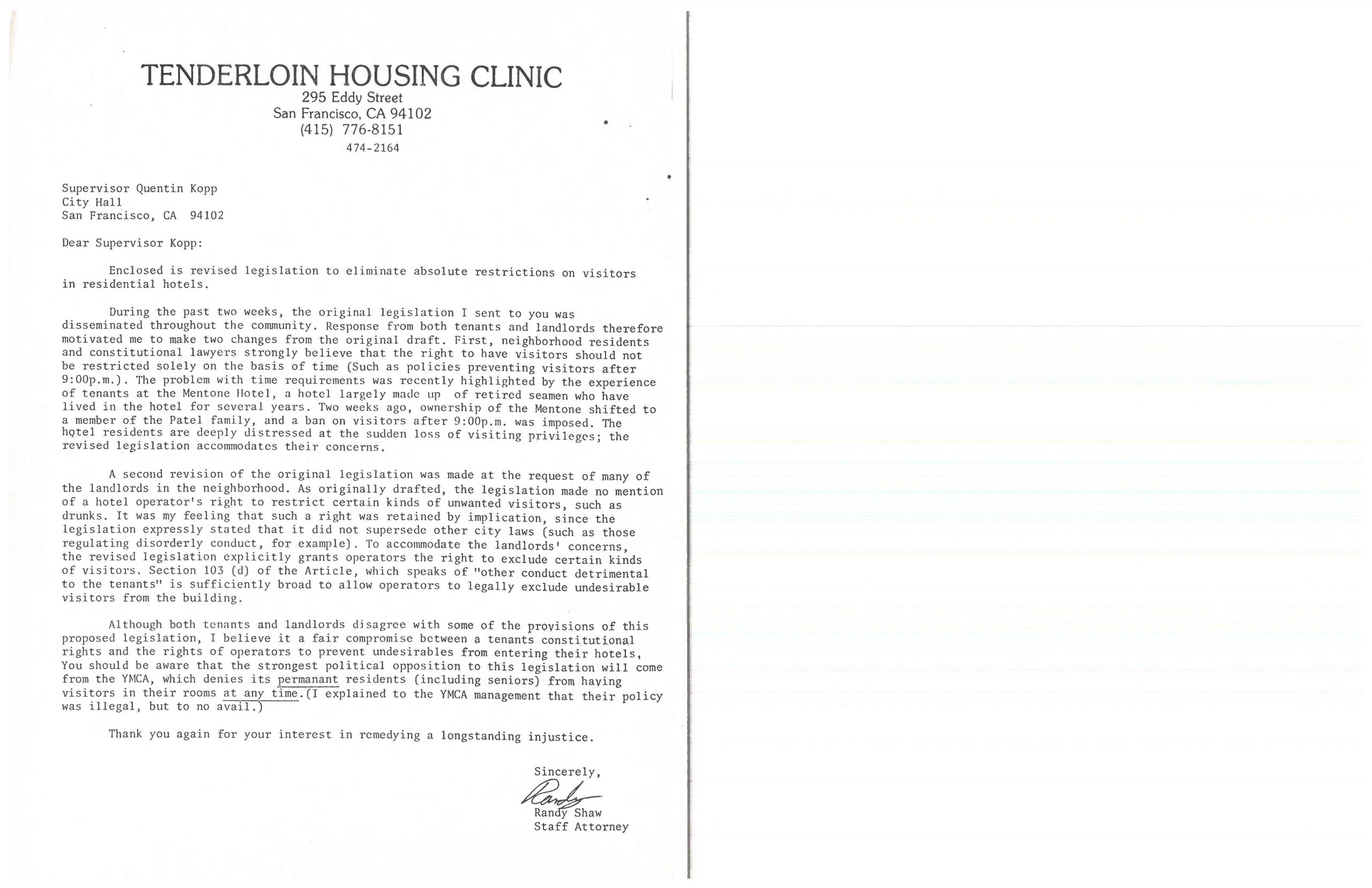 Enclosed is revised legislation to eliminate absolute restrictions on visitors in residential hotels.

During the past two weeks, the original legislation I sent to you was disseminated throughout the community. Response from both tenants and landlords therefore motivated me to make two changes from the original draft. First, neighborhood residents and constitutional lawyers strongly believe that the right to have visitors should not be restricted solely on the basis of time (Such as policies preventing visitors after 9:00p.m.). The problem with time requirements was recently highlighted by the experience of tenants at the Mentone Hotel, a hotel largely made up of retired seamen who have lived in the hotel for several years. Two weeks ago, ownership of the Mentone shifted to a member of the Patel family, and a ban on visitors after 9:00p.m. was imposed. The hotel residents are deeply distressed at the sudden loss of visiting privileges; the revised legislation accommodates their concerns.

A second revision of the original legislation was made at the request of many of the landlords in the neighborhood. As originally drafted, the legislation made no mention of a hotel operator’s right to restrict certain kinds of unwanted visitors, such as drunks. It was my feeling that such a right was retained by implication, since the legislation expressly stated that it did not supersede other city laws (such as those regulating disorderly conduct, for example). To accommodate the landlords’ concerns, the revised legislation explicitly grants operators the right to exclude certain kinds of visitors. Section 103 (d) of the Article, which speaks of “other conduct detrimental to the tenants” is sufficiently broad to allow operators to legally exclude undesirable visitors from the building.

Although both tenants and landlords disagree with some of the provisions of this proposed legislation, I believe it a fair compromise between a tenants constitutional rights and the rights of operators to prevent undesirables from entering their hotels, You should be aware that the strongest political opposition to this legislation will come from the YMCA, which denies its permanent residents (including seniors) from having visitors in their rooms at any time. (I explained to the YMCA management that their policy was illegal, but to no avail.)

Thank you again for your interest in remedying a longstanding injustice.