San Francisco’s Bureau of Building Investigation comes under further attack for not enforcing its own laws and moves closer to being overseen by a commission. 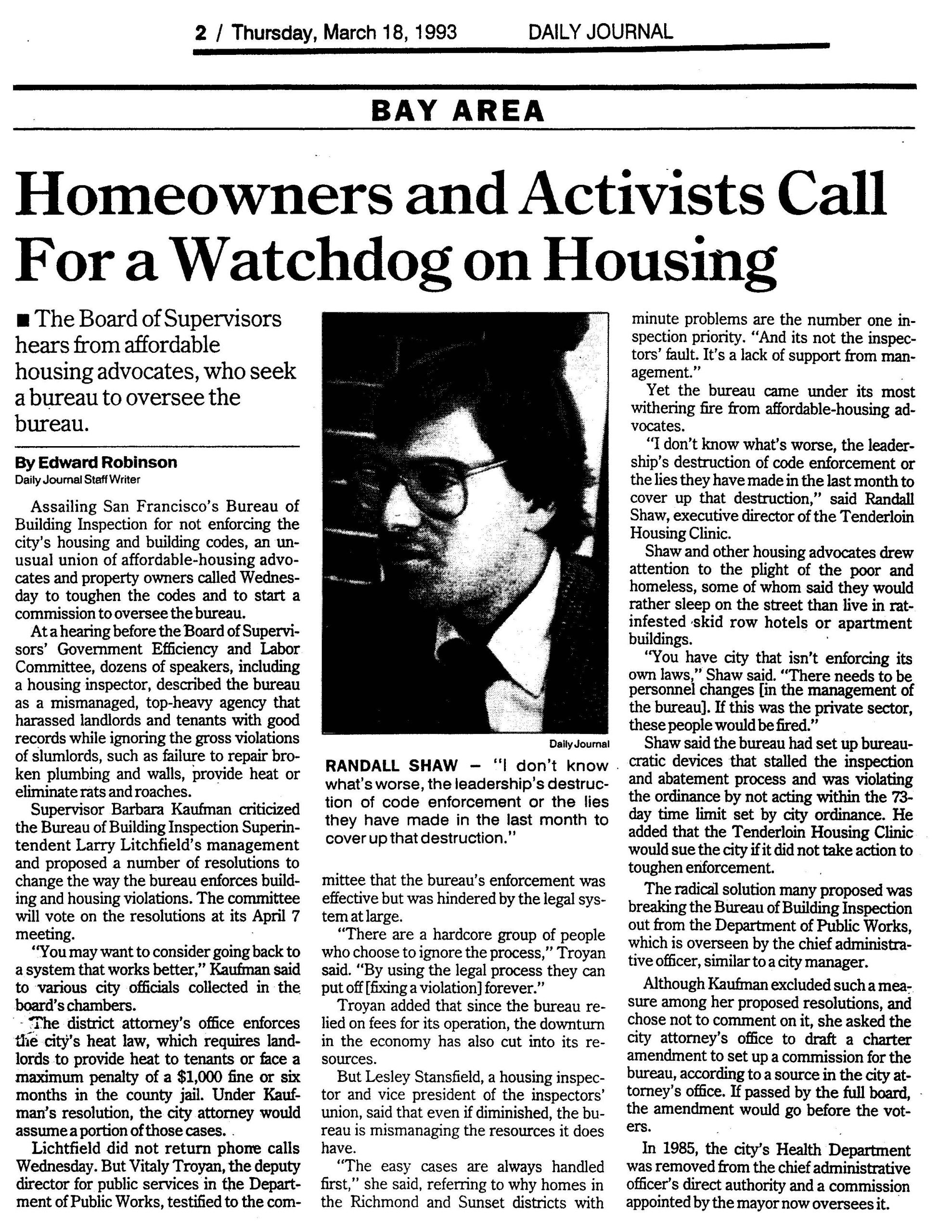 Homeowners and Activists Call For a Watchdog on Housing

The Board of Supervisors hears from affordable housing advocates, who seek a bureau to oversee the bureau.

Assailing San Francisco’s Bureau of Building Inspection for not enforcing the city’s housing and building codes, an unusual union of affordable housing advocates and property owners called Wednesday to toughen the codes and to start a commission to oversee the bureau.

At a hearing before the Board of Supervisors’ Government Efficiency and Labor Committee, dozens of speakers, including a housing inspector, described the bureau as a mismanaged, top-heavy agency that harassed landlords and tenants with good records while ignoring the gross violations of slumlords, such as failure to repair broken plumbing and walls, provide heat or eliminate rats and roaches.

Supervisor Barbara Kaufman criticized the Bureau of Building Inspection Superintendent Larry Litchfield’s management and proposed a number of resolutions to change the way the bureau enforces building and housing violations. The committee will vote on the resolutions at its April 7 meeting.

“You may want to consider going back to a system that works better,” Kaufman said to various city officials collected in the board’s chambers.

The district attorney’s office enforces the city’s heat law, which requires landlords to provide heat to tenants or face a maximum penalty of a $1,000 fine or six months in the county jail. Under Kaufman’s resolution, the city attorney would assume a portion of those cases.

Lichtfield did not return phone calls Wednesday. But Vitaly Troyan, the deputy director for public services in the Department of Public Works, testified to the committee that the bureau’s enforcement was effective but was hindered by the legal system at large.

“There are a hardcore group of people who choose to ignore the process,” Troyan said. “By using the legal process they can put off [fixing a violation] forever.”

Troyan added that since the bureau relied on fees for its operation, the downturn in the economy has also cut into its resources.

But Lesley Stansfield, a housing inspector, and vice president of the inspectors’ union, said that even if diminished, the bureau is mismanaging the resources it does have.

“The easy cases are always handled first,” she said, referring to why homes in the Richmond and Sunset districts with minute problems are the number one inspection priority. “And it’s not the inspectors’ fault. It’s a lack of support from management.”

Yet the bureau came under its most withering fire from affordable-housing advocates.

“I don’t know what’s worse, the leadership’s destruction of code enforcement or the lies they have made in the last month to cover up that destruction,” said Randall Shaw, executive director of the Tenderloin Housing Clinic.

Shaw and other housing advocates drew attention to the plight of the poor and homeless, some of whom said they would rather sleep on the street than live in rat infested skid row hotels or apartment buildings.

“You have a city that isn’t enforcing its own laws,” Shaw said. “There needs to be personnel changes [in the management of the bureau). If this was the private sector, these people would be fired.”

Shaw said the bureau had set up bureaucratic devices that stalled the inspection and abatement process and was violating the ordinance by not acting within the 73-day time limit set by city ordinance. He added that the Tenderloin Housing Clinic would sue the city if it did not take action to toughen enforcement.

The radical solution many proposed was breaking the Bureau of Building Inspection out from the Department of Public Works, which is overseen by the chief administrative officer, similar to a city manager.

In 1985, the city’s Health Department was removed from the chief administrative officer’s direct authority and a commission appointed by the mayor now oversees it.