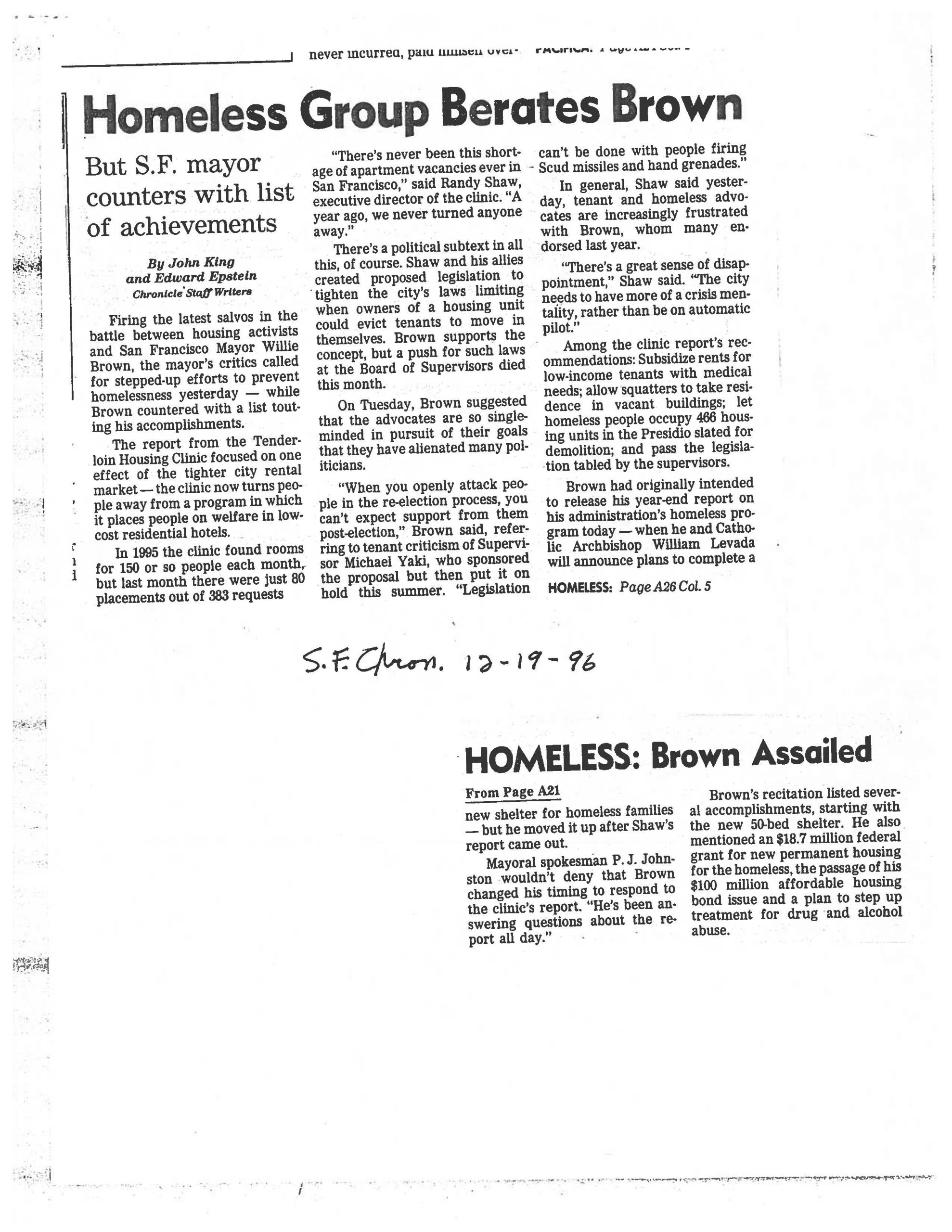 By John King and Edward Epstein

Firing the latest salvos in the battle between housing activists and San Francisco Mayor Willie Brown, the mayor’s critics called for stepped-up efforts to prevent homelessness yesterday — while Brown countered with a list touting his accomplishments.

The report from the Tenderloin Housing Clinic focused on one effect of the tighter city rental market — the clinic now turns people away from a program in which it places people on welfare in low-cost residential hotels.

In 1995 the clinic found rooms for 150 or so people each month but last month there were just 80 placements out of 383 requests.

”There’s never been this shortage of apartment vacancies ever in San Francisco,” said Randy Shaw, executive director of the clinic. “A year ago, we never turned anyone away.”

There’s a political subtext in all this, of course. Shaw and his allies created proposed legislation to tighten the city’s laws limiting when owners of a housing unit could evict tenants to move in themselves. Brown supports the concept, but a push for such laws at the Board of Supervisors died this month.

On Tuesday, Brown suggested that the advocates are so single-minded in pursuit of their goals that they have alienated many politicians.

“When you openly attack people in the re-election process, you can’t expect support from them post-election,” Brown said, referring to tenant criticism of Supervisor Michael Yaki, who sponsored the proposal but then put it on hold this summer. “Legislation can’t be done with people firing Scud missiles and hand grenades.”

In general, Shaw said. “The city needs to have more of a crisis mentality, rather than be on automatic pilot.”

Among the clinic report’s recommendations: Subsidize rents for low-income tenants with medical needs; allow squatters to take residence in vacant buildings; let homeless people occupy 466 housing units in the Presidio slated for demolition; and pass the legislation tabled by the supervisors.

Brown had originally intended to release his year-end report on his administration’s homeless program today — when he and Catholic Archbishop William Levada will announce plans to complete a new shelter for homeless families — but he moved it up after Shaw’s report came out.

Mayoral spokesman P.J. Johnston wouldn’t deny that Brown changed his timing to respond to the clinic’s report. “He’s been answering questions about the report all day.”

Brown’s recitation listed several accomplishments, starting with the new 50-bed shelter. He also mentioned an $18.7 million federal grant for new permanent housing for the homeless, the passage of his $100 million affordable housing bond issue and a plan to step up treatment for drug and alcohol abuse.