The Coalition for Code Enforcement says thousands are shivering in apartments and residential hotels because The City’s building inspection department is failing to enforce its own laws. 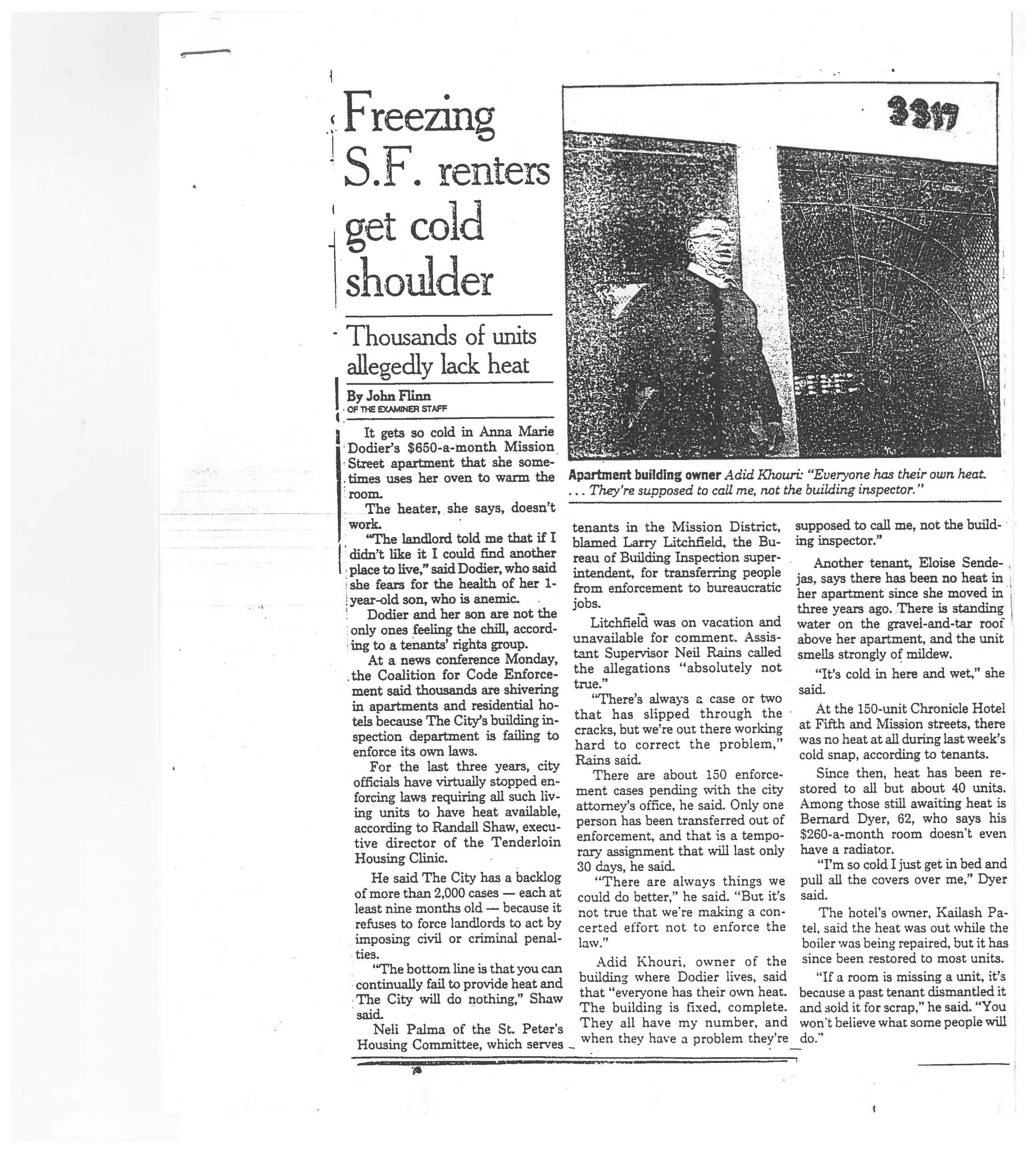 OF THE EXAMINER STAFF

It gets so cold in Anna Marie Dodier’s $650-a-month Mission Street apartment that she sometimes uses her oven to warm the room.

The heater, she says, doesn’t work.

“The landlord told me that if I didn’t like it I could find another place to live,” said Dodier, who said she fears for the health of her 1-year-old son, who is anemic.

Dodier and her son are not the only ones feeling the chill, according to a tenants’ rights group.

At a news conference Monday, the Coalition for Code Enforcement said thousands are shivering in apartments and residential hotels because The City’s building inspection department is failing to enforce its own laws.

For the last three years, city officials have virtually stopped enforcing laws requiring all such living units to have heat available, according to Randall Shaw, executive director of the Tenderloin Housing Clinic.

He said The City has a backlog of more than 2,000 cases — each at least nine months old — because it refuses to force landlords to act by imposing civil or criminal penalties.

“The bottom line is that you can continually fail to provide heat and The City will do nothing,” Shaw said.

Neli Palma of the St. Peter’s Housing Committee, which serves tenants in the Mission District, blamed Larry Litchfeild, the Bureau of Building Inspection superintendent, for transferring people from enforcement to bureaucratic jobs.

Litchfield was on vacation and unavailable for comment. Assistant Supervisor Neil Rains called the allegations “absolutely not true.”

“There’s always a case or two that has slipped through the cracks, but we’re out there working hard to correct the problem,” Rains said.

There are about 150 enforcement cases pending with the city attorney’s office, he said. Only one person has been transferred out of enforcement, and that is a temporary assignment that will last only 30 days, he said.

“There are always things we could do better,” he said. “But it’s not true that we’re making a concerted effort not to enforce the law.”

Adid Khouri, owner of the building where Dodier lives, said that “everyone has their own heat. The building is fixed, complete. They all have my number, and when they have a problem they’re supposed to call me, not the building inspector.”

Another tenant, Eloise Sendejas, says there has been no heat in her apartment since she moved in three years ago. There is standing water on the gravel-and-tar roof above her apartment, and the unit smells strongly of mildew.

At the 150-unit Chronicle Hotel at Fifth and Mission streets, there was no heat at all during last week’s cold snap, according to tenants.

Since then, heat has been restored to all but about 40 units. Among those still awaiting heat is Bernard Dyer, 62, who says his $260-a-month room doesn’t even have a radiator.

“I’m so cold I just get in bed and pull all the covers over me,” Dyer said.

The hotel’s owner, Kailash Patel, said the heat was out while the boiler was being repaired, but it has since been restored to most units.

“If a room is missing a unit, it’s because a past tenant dismantled it and sold it for scrap,” he said. “You won’t believe what some people will do.”