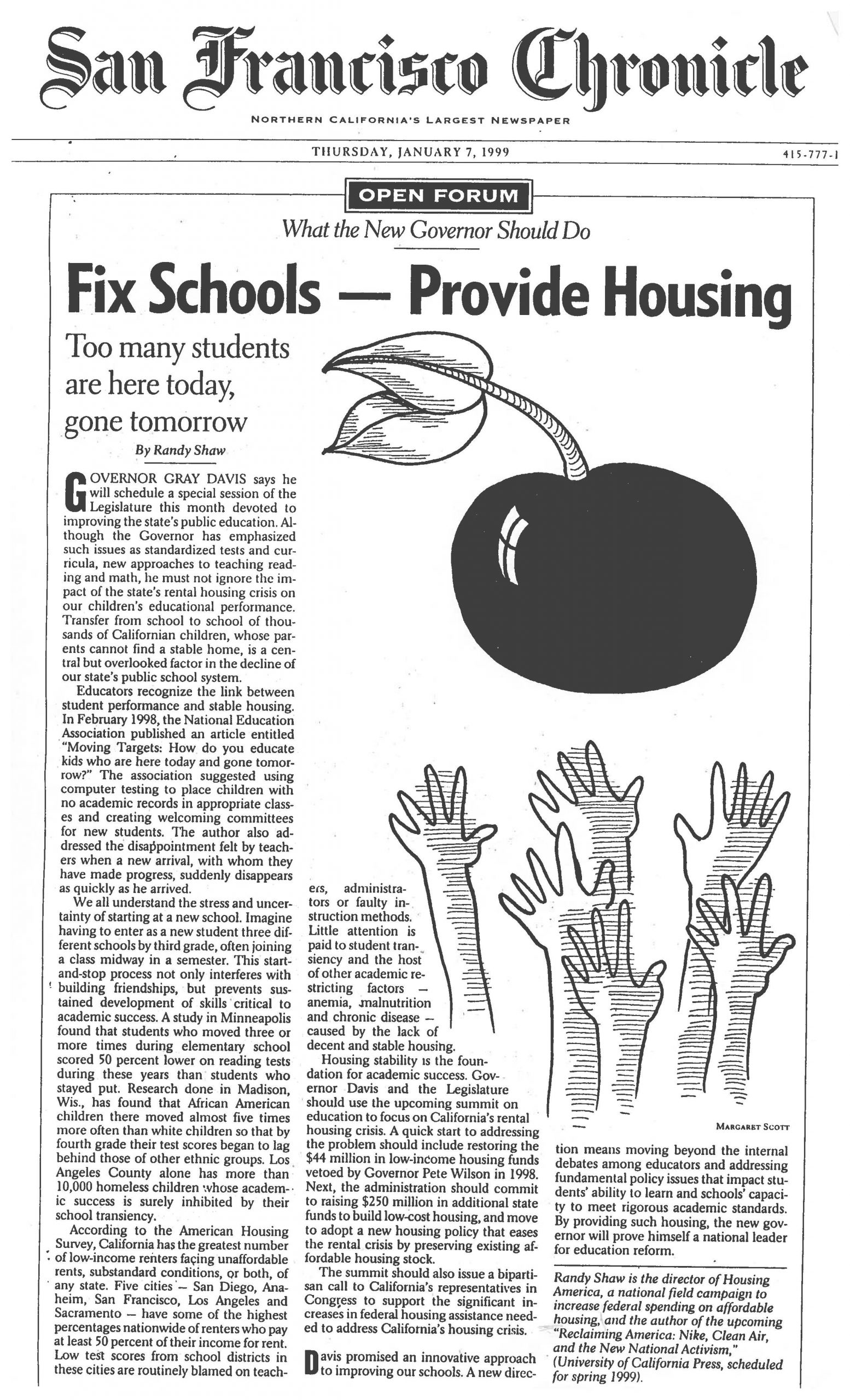 Open Forum
What the New Governor Should Do

Governor Gray Davis says he will schedule a special session of the Legislature this month devoted to improving the state’s public education. Although the Governor has emphasized such issues as standardized tests and curricula, new approaches to teaching reading and math, he must not ignore the impact of the state’s rental housing crisis on our children’s educational performance. Transfer from school to school of thousands of Californian children, whose parents cannot find a stable home, is a central but overlooked factor in the decline of our state’s public school system.

Educators recognize the link between student performance and stable housing. In February 1998, the National Education Association published an article entitled “Moving Targets: How do you educate kids who are here today and gone tomorrow?” The association suggested using computer testing to place children with no academic records in appropriate classes and creating welcoming committees for new students. The author also addressed the disappointment felt by teachers when a new arrival, with whom they have made progress, suddenly disappears as quickly as he arrived.

We all understand the stress and uncertainty of starting at a new school. Imagine having to enter as a new student three different schools by third grade, often joining a class midway in a semester. This start-and-stop process not only interferes with building friendships, but prevents sustained development of skills critical to academic success. A study in Minneapolis found that students who moved three or more times during elementary school scored 50 percent lower on reading tests during these years than students who stayed put. Research done in Madison, Wis., has found that African American children there moved almost five times more often than white children so that by fourth grade their test scores began to lag behind those of other ethnic groups. Los Angeles County alone has more than 10,000 homeless children whose academic success is surely inhibited by their school transiency.

According to the American Housing Survey, California has the greatest number of low-income renters facing unaffordable rents, substandard conditions, or both, of any state. Five cities – San Diego, Anaheim, San Francisco, Los Angeles, and Sacramento – have some of the highest percentages nationwide of renters who pay at least 50 percent of their income for rent. Low test scores from school districts in these cities are routinely blamed on teachers, administrators, or faulty instruction methods. Little attention is paid to student transiency and the host of other academic restricting factors – anemia, malnutrition, and chronic disease – caused by the lack of decent and stable housing.

Housing stability is the foundation for academic success. Governor Davis and the Legislature should use the upcoming summit on education to focus on California’s rental housing crisis. A quick start to addressing the problem should include restoring the $44 million in low-income housing funds vetoed by Governor Pete Wilson in 1998. Next, the administration should commit to raising $250 million in additional state funds to build low-cost housing, and move to adopt a new housing policy that eases the rental crisis by preserving existing affordable housing stock.

The summit should also issue a bipartisan call to California’s representatives in Congress to support the significant increases in federal housing assistance needed to address California’s housing crisis.

Davis promised an innovative approach to improving our schools. A new direction means moving beyond the internal debates among educators and addressing fundamental policy issues that impact students’ ability to learn and schools’ capacity to meet rigorous academic standards. By providing such housing, the new governor will prove himself a national leader for education reform.

Randy Shaw is the director of Housing America, a national field campaign to increase federal spending on affordable housing, and the author of the upcoming “Reclaiming America: Nike, Clean Air, and the New National Activism” (University of California Press, scheduled for spring 1999).