THC defends a tenant displaced by the 1989 earthquake and wins the case in a First District Court of Appeal, arguing that the landlord failed to offer the apartment back to the tenant following necessary repairs. 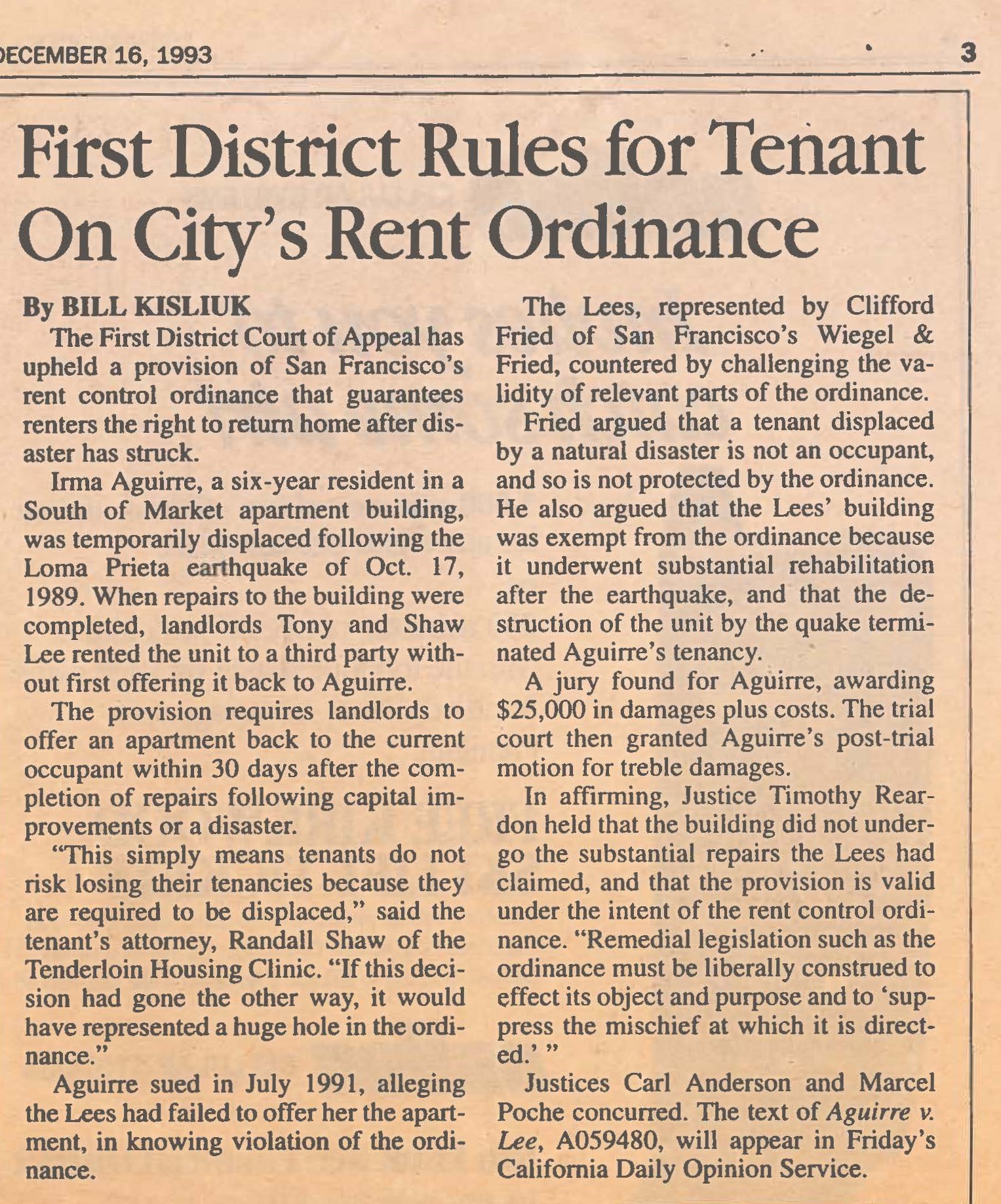 The First District Court of Appeal has upheld a provision of San Francisco’s rent control ordinance that guarantees renters the right to return home after disaster has struck.

Irma Aguirre, a six-year resident in a South of Market apartment building, was temporarily displaced following the Loma Prieta earthquake of Oct. 17, 1989. When repairs to the building were completed, landlords Tony and Shaw Lee rented the unit to a third party without first offering it back to Aguirre.

The provision requires landlords to offer an apartment back to the current occupants within 30 days after the completion of repairs following capital improvements or a disaster.

This simply means tenants do not risk losing their tenancies because they are required to be displaced,” said the tenant’s attorney, Randall Shaw of the Tenderloin Housing Clinic. “If this decision had gone the other way, it would have represented a huge hole in the ordinance.”

Aguirre sued in July 1991, alleging the Lees had failed to offer her the apartment, in knowing violation of the ordinance.

The Lees, represented by Clifford Fried of San Francisco’s Wiegel & Fried, countered by challenging the validity of relevant parts of the ordinance.

Fried argued that a tenant displaced by a natural disaster is not an occupant, and so is not protected by the ordinance. He also argued that the Lee’s building was exempt from the ordinance because it underwent substantial rehabilitation after the earthquake, and that the destruction of the unit by the quake terminated Aguirre’s tenancy.

A jury found for Aguirre, awarding $25,000 in damages plus costs. The trial court then granted Aguirre’s post-trial motion for treble damages.

In affirming, Justice Timothy Reardon held that the building did not undergo the substantial repairs the Lees had claimed, and that the provision is valid under the intent of the rent control ordinance. “Remedial legislation such as the ordinance must be liberally construed to effect its object and purpose and to ‘suppress the mischief at which it is directed.’”