A New York City newsletter states that over 400,000 low-income New York families are living in substandard housing and advocates that Housing America’s proposal to use the Federal Housing Administration surplus could help solve this affordable housing crisis. 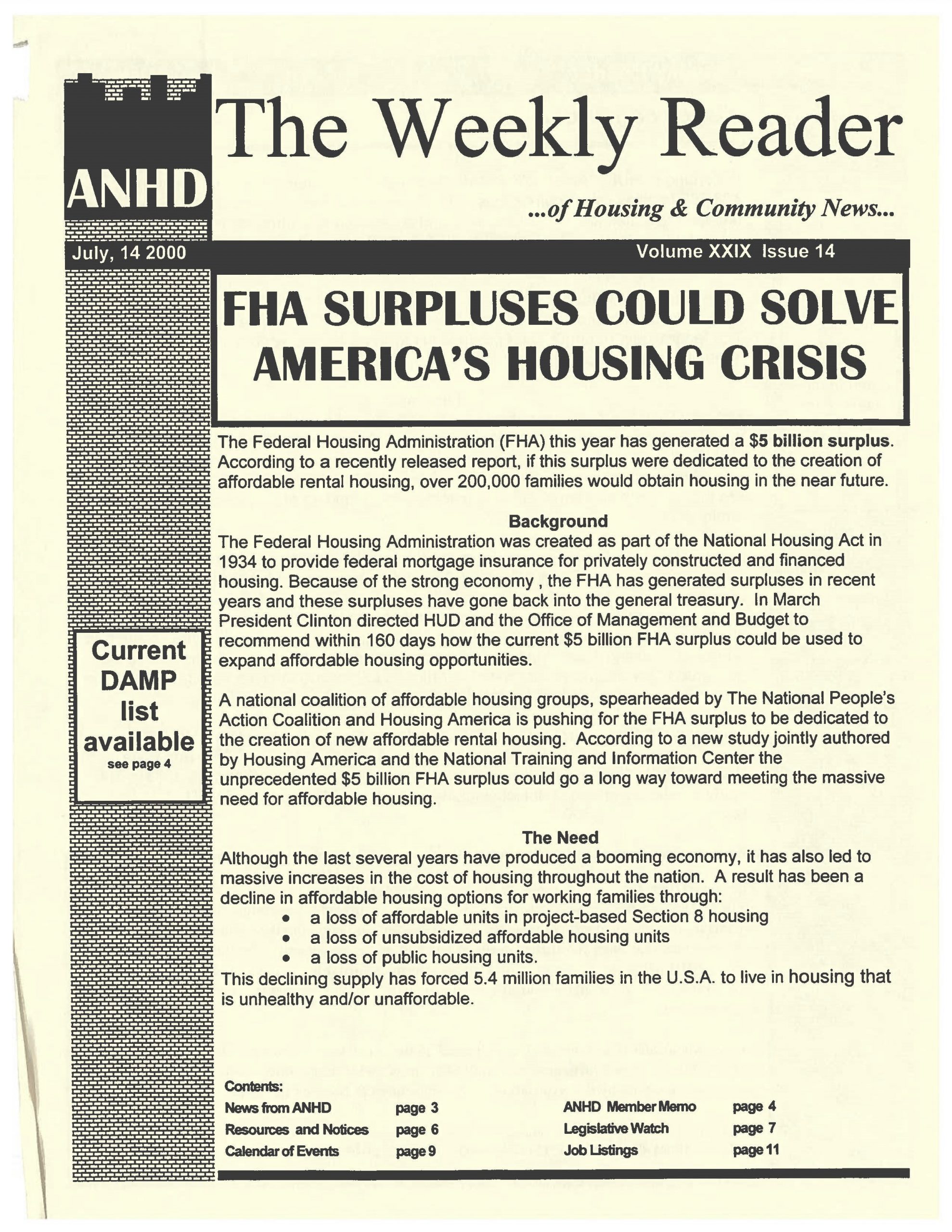 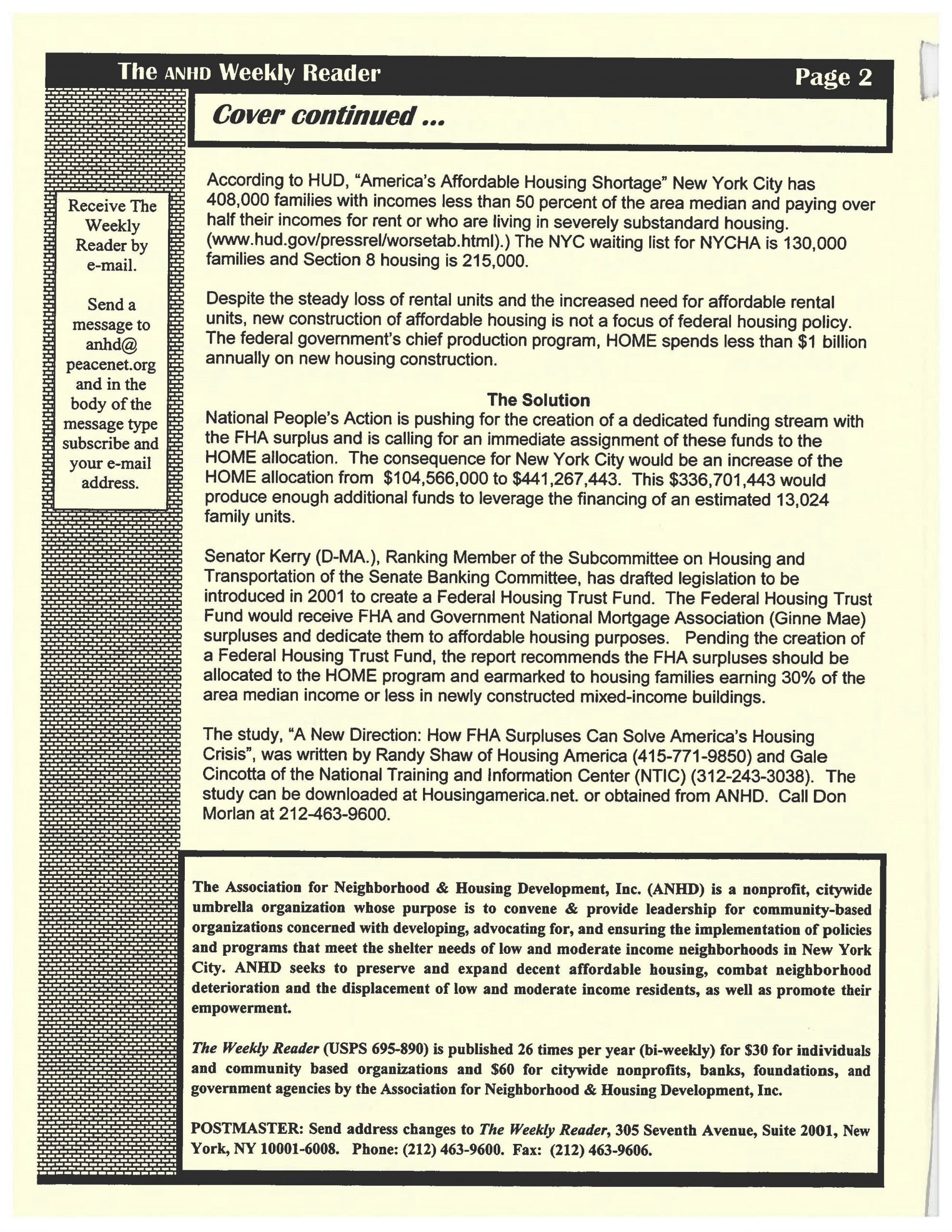 The Federal Housing Administration (FHA) this year has generated a $5 billion surplus. According to a recently released report, if this surplus were dedicated to the creation of affordable rental housing, over 200,000 families would obtain housing in the near future.

The Federal Housing Administration was created as part of the National Housing Act in 1934 to provide federal mortgage insurance for privately constructed and financed housing. Because of the strong economy, the FHA has generated surpluses in recent years and these surpluses have gone back into the general treasury. In March President Clinton directed HUD and the Office of Management and Budget to recommend within 160 days how the current $5 billion FHA surplus could be used to expand affordable housing opportunities.

A national coalition of affordable housing groups, spearheaded by The National People’s Action Coalition and Housing America, is pushing for the FHA surplus to be dedicated to the creation of new affordable rental housing. According to a new study jointly authored by Housing America and the National Training and Information Center the unprecedented $5 billion FHA surplus could go a long way toward meeting the massive need for affordable housing.

Although the last several years have produced a booming economy, it has also led to massive increases in the cost of housing throughout the nation. A result has been a decline in affordable housing options for working families through:

This declining supply has forced 5.4 million families in the U.S.A. to live in housing that is unhealthy and/or unaffordable.

According to HUD, “America’s Affordable Housing Shortage” New York City has 408,000 families with incomes less than 50 percent of the area median and paying over half their incomes for rent or who are living in severely substandard housing. (www.hud.gov/pressrel/worsetab.html).) The NYC waiting list for NYCHA is 130,000 families and Section 8 housing is 215,000.

Despite the steady loss of rental units and the increased need for affordable rental units, new construction of affordable housing is not a focus of federal housing policy. The federal government’s chief production program, HOME spends less than $1 billion annually on new housing construction.

National People’s Action is pushing for the creation of a dedicated funding stream with the FHA surplus and is calling for an immediate assignment of these funds to the HOME allocation. The consequence for New York City would be an increase of the HOME allocation from $104,566,000 to $441,267,443. This $336,701,443 would produce enough additional funds to leverage the financing of an estimated 13,024 family units.

Senator Kerry (D-MA.), Ranking Member of the Subcommittee on Housing and Transportation of the Senate Banking Committee, has drafted legislation to be introduced in 2001 to create a Federal Housing Trust Fund. The Federal Housing Trust Fund would receive FHA and Government National Mortgage Association (Ginne Mae) surpluses and dedicate them to affordable housing purposes. Pending the creation of a Federal Housing Trust Fund, the report recommends the FHA surpluses should be allocated to the HOME program and earmarked to housing families earning 30% of the area median income or less in newly constructed mixed-income buildings.

The study, “A New Direction: How FHA Surpluses Can Solve America’s Housing Crisis”, was written by Randy Shaw of Housing America (415-771-9850) and Gale Cincotta of the National Training and Information Center (NTIC) (312-243-3038). The study can be downloaded at Housingamerica.net or obtained from ANHD. Call Don Morlan at 212-463-9600.

The Association for Neighborhood & Housing Development, Inc. (ANHD) is a nonprofit, citywide umbrella organization whose purpose is to convene & provide leadership for community-based organizations concerned with developing, advocating for, and ensuring the implementation of policies and programs that meet the shelter needs of low and moderate income neighborhoods in New York City. ANHD seeks to preserve and expand decent affordable housing, combat neighborhood deterioration and the displacement of low and moderate income residents, as well as promote their empowerment.

The Weekly Reader (USPS 695-890) is published 26 times per year (bi-weekly) for $30 for individuals and community based organizations and $60 for citywide nonprofits, banks, foundations, and government agencies by the Association for Neighborhood & Housing Development, Inc.