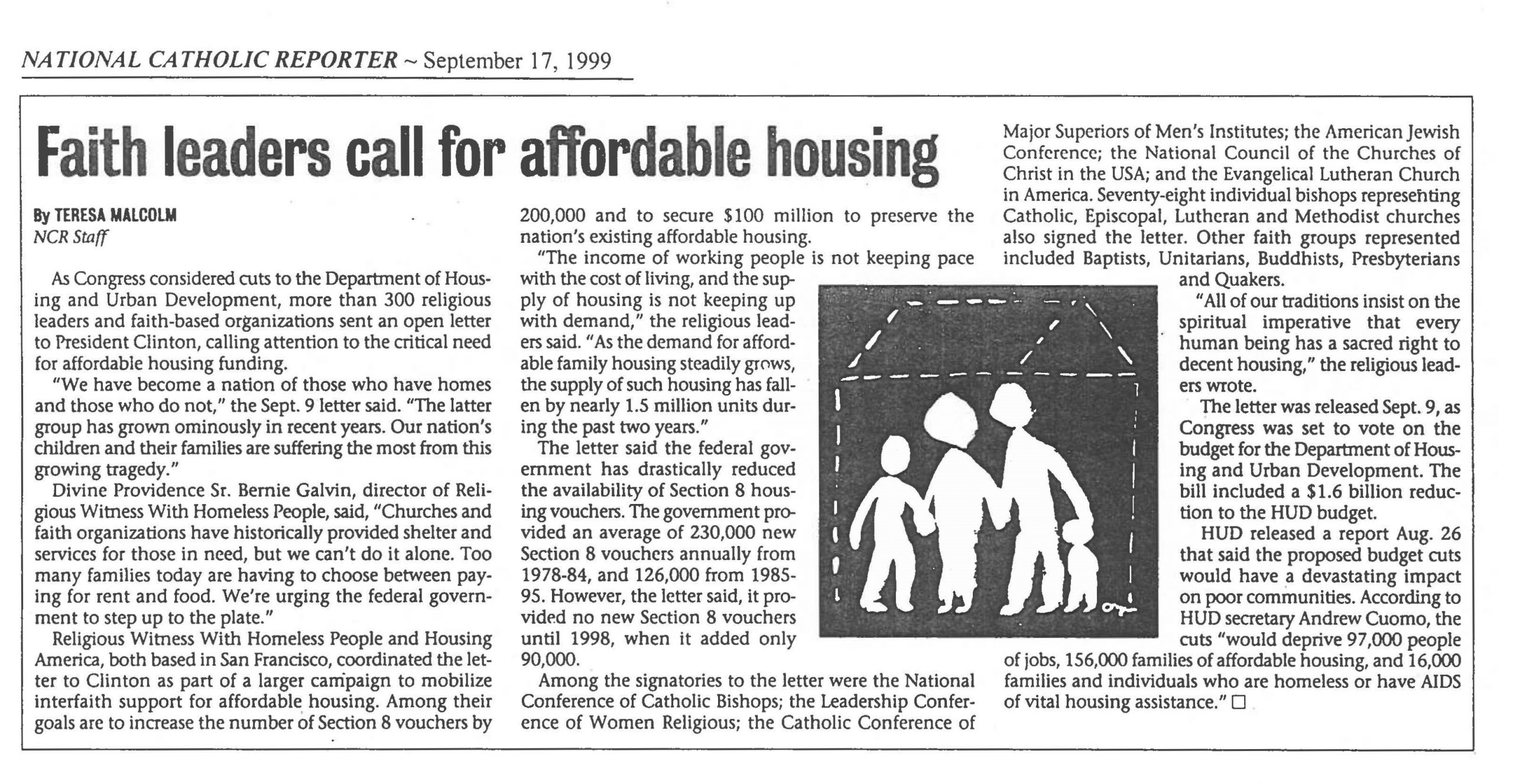 As Congress considered cuts to the Department of Housing and Urban Development, more than 300 religious leaders and faith-based organizations sent an open letter to President Clinton, calling attention to the critical need for affordable housing funding.

“We have become a nation of those who have homes and those who do not,” the Sept. 9 letter said. “The latter group has grown ominously in recent years. Our nation’s children and their families are suffering the most from this growing tragedy.”

Divine Providence Sr. Bernie Galvin, director of Religious Witness With Homeless People, said, “Churches and faith organizations have historically provided shelter and services for those in need, but we can’t do it alone. Too many families today are having to choose between paying for rent and food. We’re urging the federal government to step up to the plate.”

Religious Witness With Homeless People and Housing America, both based in San Francisco, coordinated the letter to Clinton as part of a larger campaign to mobilize interfaith support for affordable housing. Among their goals are to increase the number of Section 8 vouchers by 200,000 and to secure $100 million to preserve the nation’s existing affordable housing.

“The income of working people is not keeping pace with the cost of living, and the supply of housing is not keeping up with demand,” the religious leaders said. “As the demand for affordable family housing steadily grows, the supply of such housing has fallen by nearly 1.5 million units during the past two years.”

Among the signatories to the letter were the National Conference of Catholic Bishops; the Leadership Conference of Women Religious; the Catholic Conference of Major Superiors of Men’s Institutes; the American Jewish Conference; the National Council of the Churches of Christ in the USA; and the Evangelical Lutheran Church in America. Seventy-eight individual bishops representing Catholic, Episcopal, Lutheran and Methodist churches also signed the letter. Other faith groups represented included Baptists, Unitarians, Buddhists, Presbyterians and Quakers.

“All of our traditions insist on the spiritual imperative that every human being has a sacred right to decent housing,” the religious leaders wrote.

The letter was released Sept. 9, as Congress was set to vote on the budget for the Department of Housing and Urban Development. The bill included a $1.6 billion reduction to the HUD budget.

HUD released a report Aug. 26 that said the proposed budget cuts would have a devastating impact on poor communities. According to HUD secretary Andrew Cuomo, the cuts “would deprive 97,000 people of jobs, 156,000 families of affordable housing, and 16,000 families and individuals who are homeless or have AIDS of vital housing assistance.”