SF Superior Court Rules the Hotel Chronicle improperly tried to evict tenants. The 156 units will be preserved as a residential hotel instead of being turned into offices and tourist hotel rooms. 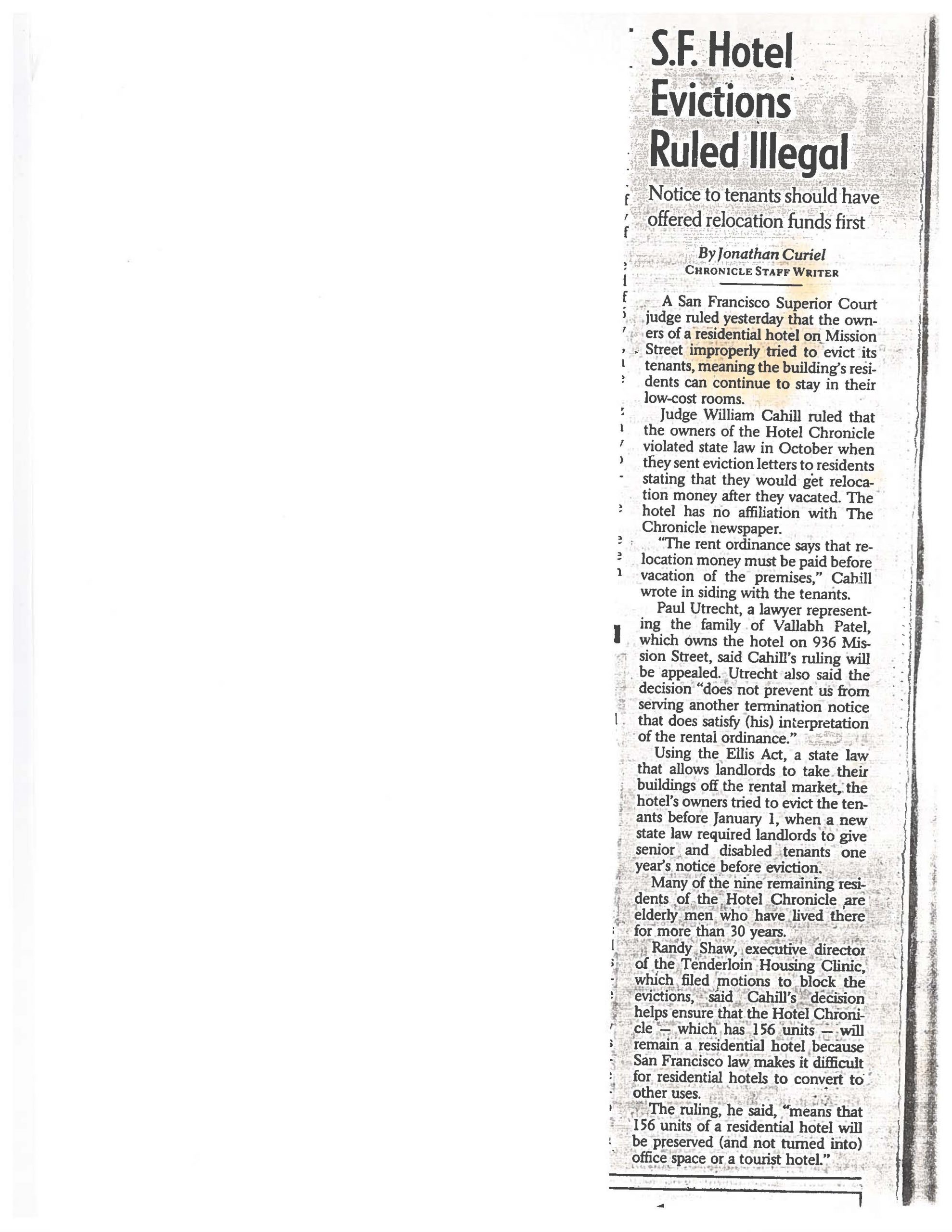 Notice to tenants should have offered relocation funds first

A San Francisco Superior Court judge ruled yesterday that the owners of a residential hotel on Mission Street improperly tried to evict its tenants, meaning the building’s residents can continue to stay in their low-cost rooms.

Judge William Cahill ruled that the owners of the Hotel Chronicle violated state law in October when they sent eviction letters to residents stating that they would get relocation money after they vacated. The hotel has no affiliation with The Chronicle newspaper.

“The rent ordinance says that relocation money must be paid before vacation of the premises,” Cahill wrote in siding with the tenants.

Paul Utrecht, a lawyer representing the family of Vallabh Patel, which owns the hotel on 936 Mission Street, said Cahill’s ruling will be appealed. Utrecht also said the decision “does not prevent us from serving another termination notice that does satisfy (his) interpretation of the rental ordinance.”

Using the Ellis Act, a state law that allows landlords to take their buildings off the rental market, the hotel’s owners tried to evict the tenants before January 1, when a new state law required landlords to give senior and disabled tenants one year’s notice before eviction.

Many of the nine remaining residents of the Hotel Chronicle are elderly men who have lived there for more than 30 years.

Randy Shaw, executive director 3 of the Tenderloin Housing Clinic, which filed motions to block the evictions, said Cahill’s decision helps ensure that the Hotel Chronicle – which has 156 units – will remain a residential hotel because San Francisco law makes it difficult for residential hotels to convert to other uses.

The ruling, he said, “means that 156 units of a residential hotel will be preserved (and not turned into) office space or a tourist hotel.”