Tenderloin Housing Clinic brings attention to the increasing number of owner-move in evictions despite the lack of media coverage and inadequate legislative action. 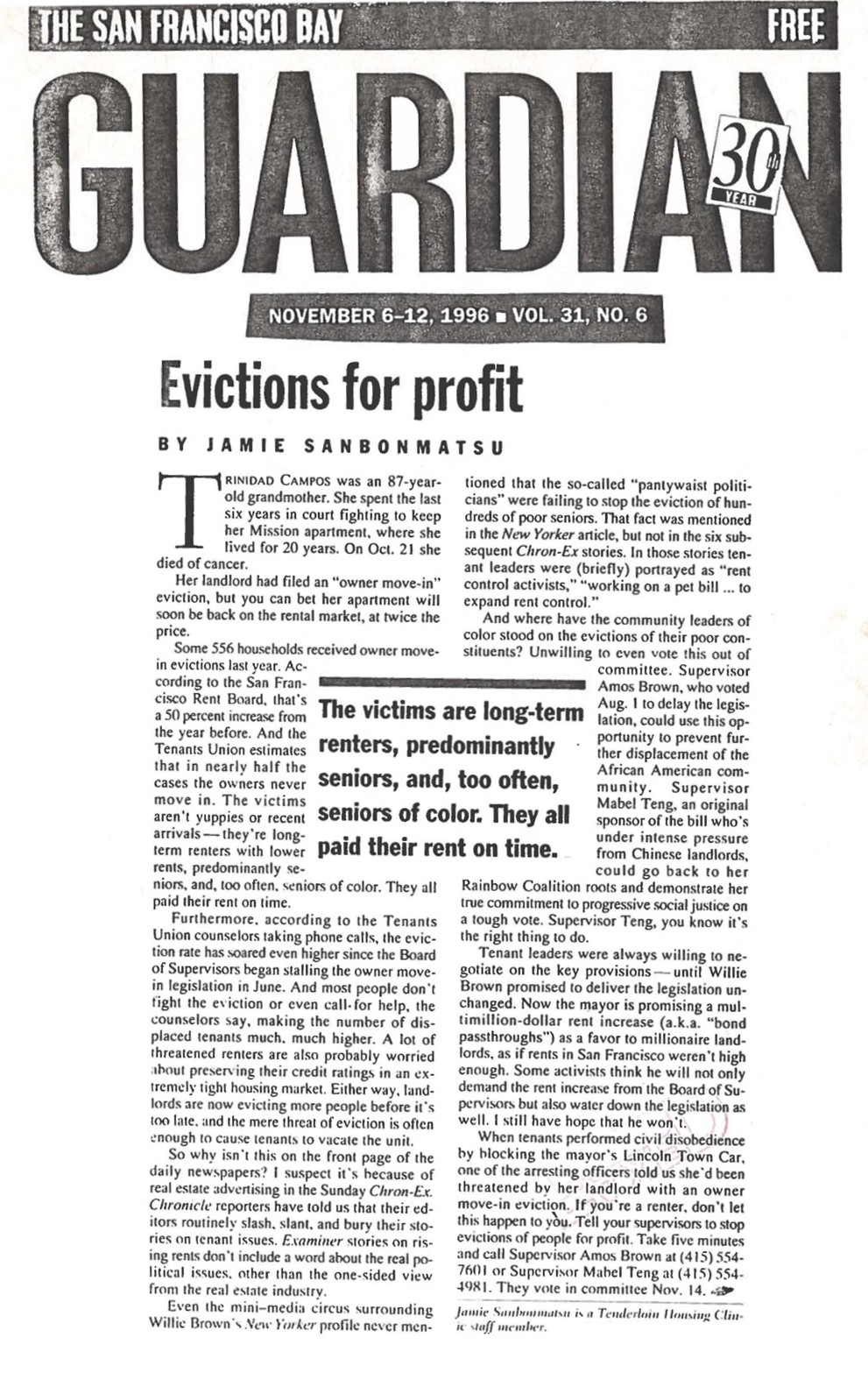 Trinidad Campos was an 87-year-old grandmother. She spent the last six years in court fighting to keep her Mission apartment, where she lived for 20 years. On Oct. 21 she died of cancer.

Her landlord had filed an “owner move-in” eviction, but you can bet her apartment will soon be back on the rental market, at twice the price.

Some 556 households received owner move-in evictions last year. According to the San Francisco Rent Board, that’s a 50 percent increase from the year before. And the Tenants Union estimates that in nearly half the cases the owners never move in. The victims aren’t yuppies or recent arrivals — they’re long term renters with lower rents, predominantly seniors, and, too often, seniors of color. They all paid their rent on time.

Furthermore, according to the Tenants Union counselors taking phone calls, the eviction rate has soared even higher since the Board of Supervisors began stalling the owner move-in legislation in June. And most people don’t fight the eviction or even call for help, the counselors say, making the number of displaced tenants much, much higher. A lot of threatened renters are also probably worried about preserving their ratings in an extremely tight housing market. Either way, landlords are now evicting more people before it’s too late and the mere threat of eviction is often enough to cause tenants to vacate the unit.

So why isn’t this on the front page of the daily newspapers? I suspect it’s because of real estate advertising in the Sunday Chron-Ex. Chronicle reporters have told us that their editors routinely slash, slant, and bury their stories on tenant issues. Examiner stories on rising rents don’t include a word about the real political issues, other than the one-sided view from the real estate industry.

Even the mini-media circus surrounding Willie Brown’s New Yorker profile never mentioned that the so-called “pantywaist politicians” were failing to stop the eviction of hundreds of poor seniors. That fact was mentioned in the New Yorker article, but not in the six subsequent Chron-Ex stories. In those stories tenant leaders were (briefly) portrayed as “rent control activists,” “working on a pet bill … to expand rent control.”

And where have the community leaders of color stood on the evictions of their poor constituents? Unwilling to even vote this out of committee. Supervisor Amos Brown, who voted Aug. 1 to delay the legislation, could use this opportunity to prevent further displacement of the African American community. Supervisor Mabel Teng, an original sponsor of the bill who’s under intense pressure from Chinese landlords, could go back to her Rainbow Coalition roots and demonstrate her true commitment to progressive social justice on a tough vote. Supervisor Teng, you know it’s the right thing to do.

Tenant leaders were always willing to negotiate on the key provisions — until Willie Brown promised to deliver the legislation unchanged. Now the mayor is promising a multimillion-dollar rent increase (a.k.a. “bond passthroughs”) as a favor to millionaire landlords, as if rents in San Francisco weren’t high enough. Some activists think he will not only demand the rent increase from the Board of Supervisors but also water down the legislation as well. I still have hope that he won’t.

When tenants performed civil disobedience by blocking the mayor’s Lincoln Town Car, one of the arresting officers told us she’d been threatened by her landlord with an owner move-in eviction. If you’re a renter, don’t let this happen to you. Tell your supervisors to stop evictions of people for profit. Take five minutes and call Supervisor Amos Brown at (415) 554-7601 or Supervisor Mabel Teng at (415) 554-4981. They vote in committee Nov. 14.