A governor’s race tackles the issue of the governor’s power to make judicial appointments that will shape housing policy and land use laws. 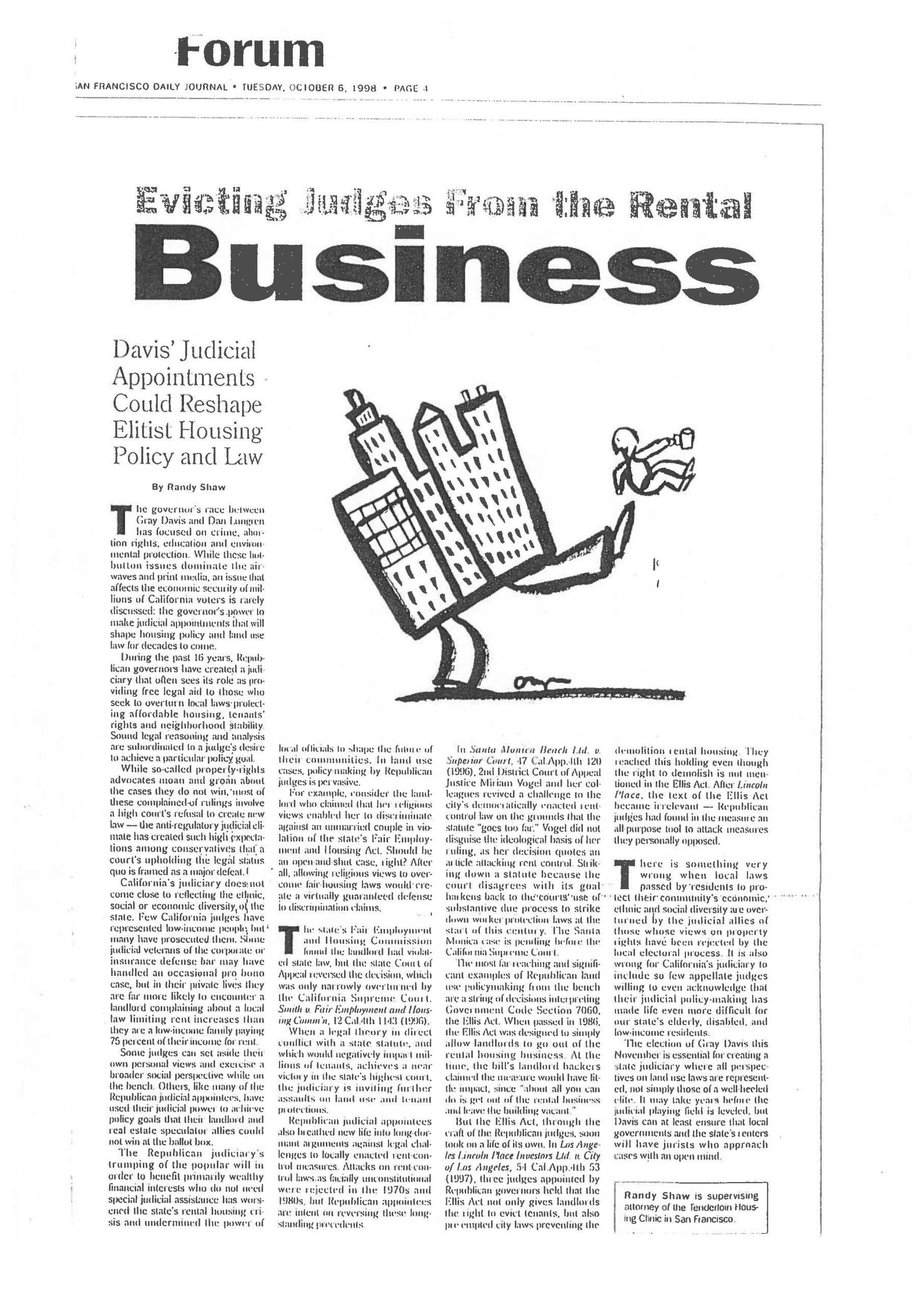 Evicting Judges From The Rental Business

The governor’s race between Gray Davis and Dan Lungen has focused on crime, abortion rights, education and environmental protection. While this button issues dominate the airwaves and print media, an issue that affects the economic security of millions of California voters are rarely discussed: the governor’s power to make judicial appointments that will shape housing policy and land use law for decades to come.

During the past 16 years, Republican governors have created a judiciary that often sees its role as providing free legal aid to those who seek to overturn local laws protecting affordable housing, tenants rights and neighborhood stability. Sound legal reasoning and analysis are subordinated to a judge’s desire to achieve a particular policy goal.

While so-called property rights advocates moan and groan about the cases they do not win most of these complained of rulings involve a high court’s refusal to create new law — the anti-regulatory judicial eliminate has created such high expectations among conservatives that a court’s upholding the legal status quo is framed as a major defeat.

California’s judiciary does not come close to reflecting the ethnic, social or economic diversity of the state. Few California judges have represented low-income people but many have prosecuted them. Some judicial veterans of the cooperate or insurance defense bar may have handled an occasional pro bono case, but in their private lives they are far more likely to encounter a landlord complaining about a local law limiting rent increases than they are a low-income family paying 75 percent of their income for rent.

Some judges can set aside their own personal views and exercise a broader social perspective while on the bench. Others, like many of the Republican judicial appointees, have used their judicial power to achieve policy goals that their landlord and real estate speculator allies could not win at the ballot box.

The Republic judiciary’s trumping of the popular will in order to benefit primarily wealthy financial interests who do not need special judicial assistance has worsened the state’s rental housing crisis and undermined the power of local officials to shape the future of their communities. In land use cases, policy making by Republican judges is pervasive.

For example, consider the landlord who claimed that her religious views enabled her to discriminate against an unmarried couple in violation of the state’s Fair
Employment and Housing Act. Should be an open and shut case, right? After all, allowing religious views to overcome fair housing laws would create a virtually guaranteed defense to discrimination claims.

When a legal theory in direct conflict with a state statute, and which would negatively impact millions of tenants, achieves a near victory in the state’s highest court, the judiciary is inviting further assaults on land use and tenant protections.

Republican judicial appointees also breathed new life into long dormant arguments against legal challenges to locally enacted rent-control measures. Attacks on rent-control laws as facially unconstitutional were rejected in the 1970’s and 1980’s, but Republican appointees are intent on reversing these longstanding precedents.

In Santa Monica Beach Ltd. v. Superior Court. 47 Cal.App.4th 120 (1996), 2nd District Court of Appeal Justice Miriam Vogel and her colleagues received a challenge to the city’s democratically enacted rent-control law on the grounds that the statute “goes too far.” Vogel did not disguise the ideological basis of her ruling, as her decision quotes an article attacking rent control. Striking down a statute because the court disagrees with its goal harkens back to the courts use of substantive due process to strike down worker protection laws at the start of this century. The Santa Monica case is pending before the California Supreme Court.

The most far reaching and significant examples of Republican land use policy making from the bench are a string of decisions interpreting Government Code Section 7060, the Ellis Act. When passed in 1986, the Ellis Act was designed to simply allow landlords to go out of the rental housing business. At the time, the bill’s landlord backers claimed the measure would have little impact, since “about all you can do is get out of the rental business and leave the building vacant.”

But the Ellis Act, through the craft of the Republicans’ judges, soon took on a life of its own. In Los Angeles Lincoln Place Investors Ltd. v. City of Los Angeles, 51 Cal.App.4th 53 (1997), three judges appointed by Republican governors held that the Ellis Act not only gives landlords the right to evict tenants, but also preempted city laws preventing the demolition of rental housing. They reached this holding even though the right to demolish is not mentioned in the Ellis Act. After Lincoln Place, the text of the Ellis Act became irrelevant — Republican judges had found in the measure an all purpose tool to attack measures they personally opposed.

There is something very wrong when local laws passed by residents to protect their community’s economic, ethnic and social diversity are overturned by the judicial allies of those whose views on property rights have been rejected by the local electoral process. It is also wrong for California’s judiciary to include so few appellate judges willing to even acknowledge that their judicial policy making has made life even more difficult for our state’s elderly, disabled, and low-income residents.

The election of Gray Davis this November is essential for creating a state judiciary where all perspectives on land use laws are represented, not simply those of a well heeled elite. It may take years before the judicial playing field is leveled, but Davis can at least ensure that local governments and the state’s renters will have jurists who approach cases with an open mind.

–Randy Shaw is supervising attorney of the Tenderloin Housing Clinic in San Francisco.