Kaussen’s death sends his estate scrambling to untangle his finances, leaving many in SF and abroad uncertain about the future of his debt and active lawsuits. 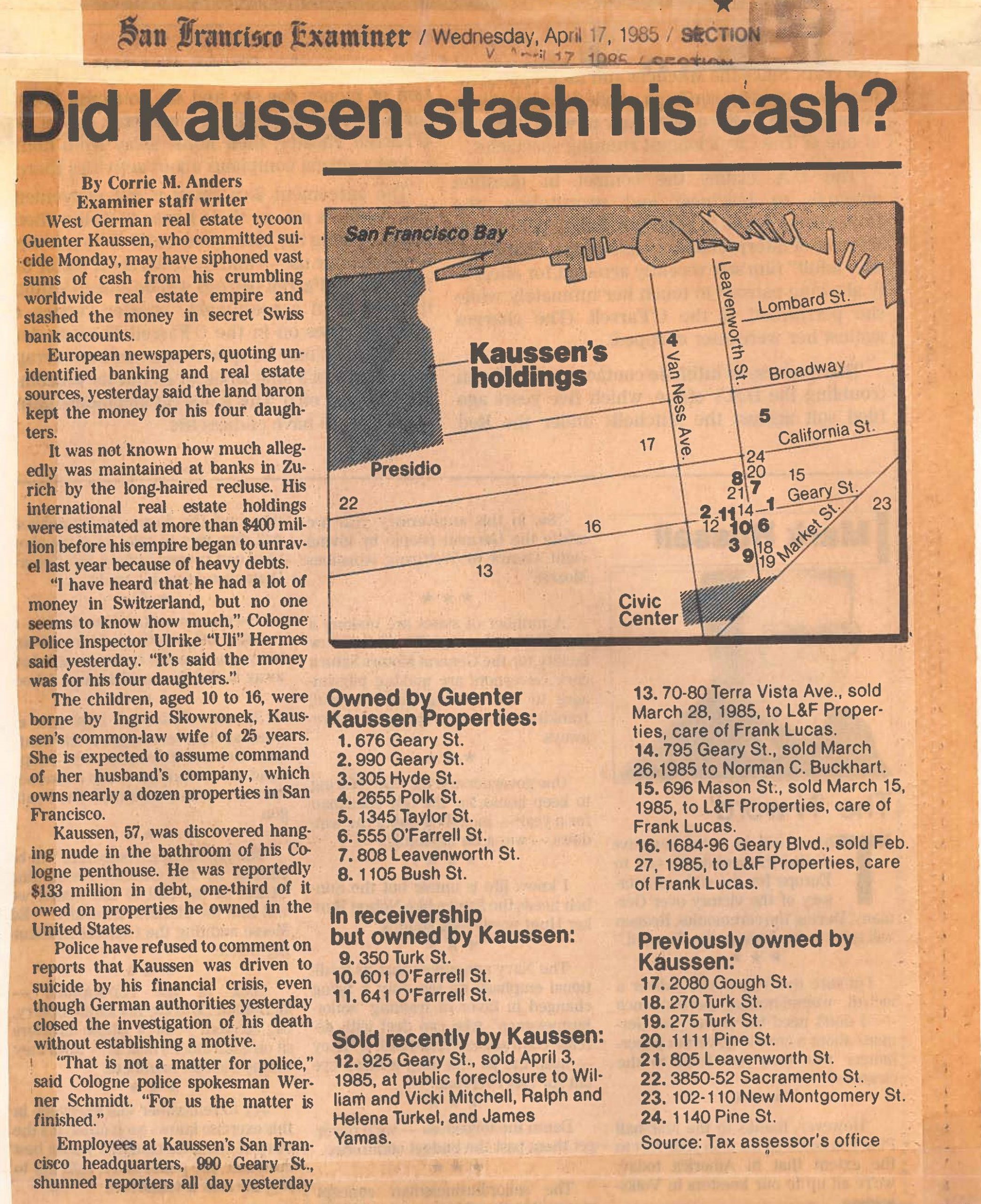 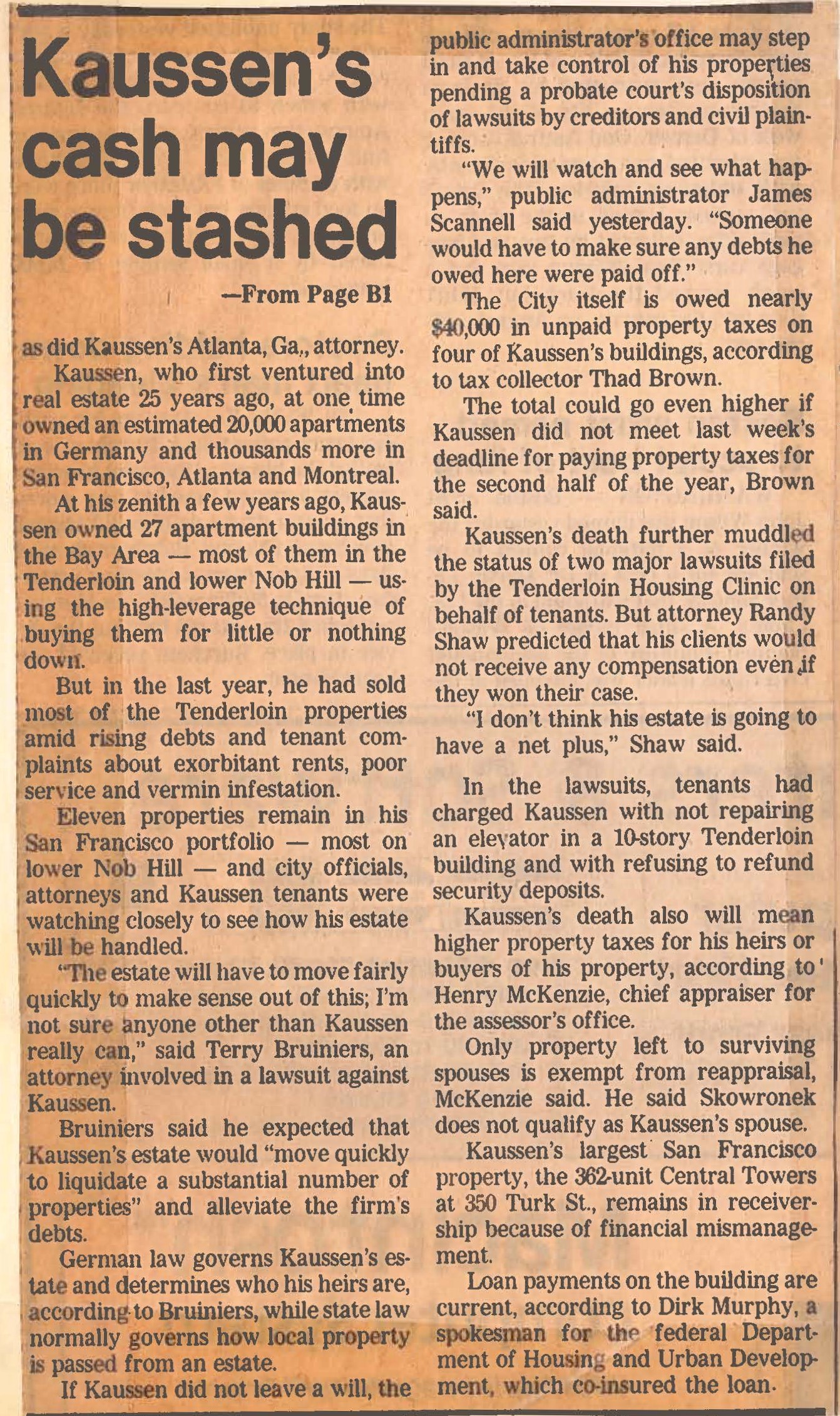 Did Kaussen Stash His Cash?

It was not known how much allegedly was maintained at banks in Zurich by the long-haired recluse. His international real estate holdings were estimated at more than $400 million before his empire began to unravel last year because of heavy debts.

“I have heard that he had a lot of money in Switzerland, but no one seems to know how much,” Cologne Police Inspector Ulrike “Uli” Hermes said yesterday. “It’s said the money was for his four daughters.”

The children, aged 10 to 16, were borne by Ingrid Skowronek, Kaussen’s common-law wife of 25 years. She is expected to assume command of her husband’s company, which owns nearly a dozen properties in San Francisco.

Kaussen, 57, was discovered hanging nude in the bathroom of his Cologne penthouse. He was reportedly $133 million in debt, one-third of it owed on properties he owned in the United States.

Police have refused to comment on reports that Kaussen was driven to suicide by his financial crisis, even though German authorities yesterday closed the investigation of his death without establishing a motive.

“That is not a matter for police,” said Cologne police spokesman Werber Schmidt. “For us the matter is finished.”

Kaussen, who first ventured into real estate 25 years ago, at one time owned an estimated 20,000 apartments in Germany and thousands more in San Francisco, Atlanta and Montreal.

At his zenith a few years ago, Kaussen owned 27 apartment buildings in the Bay Area — most of them in the Tenderloin and lower Nob Hill — using the high-leverage technique of buying them for little or nothing down.

But in the last year, he had sold most of the Tenderloin properties amid rising debts and tenant complaints about exorbitant rents, poor service and vermin infestation.

Eleven properties remain in his San Francisco portfolio — most on lower Nob Hill — and city officials, attorneys and Kaussen tenants were watching closely to see how his estate will be handled.

“The estate will have to move fairly quickly to make sense out of this; I’m not sure anyone other than Kaussen really can,” said Terry Bruiniers, an attorney involved in a lawsuit against public administrator’s office may step in and take control of his properties pending a probate court’s disposition of lawsuits by creditors and civil plaintiffs.

“We will watch and see what happens,” public administrator James Scannell said yesterday. “Someone would have to make sure any debts he owed here were paid off.”

The City itself is owed nearly $40,000 in unpaid property taxes on four of Kaussen’s buildings, according to tax collector Thad Brown.

The total could go even higher if Kaussen did not meet last week’s deadline for paying property taxes for the second half of the year, Brown said.

Kaussen’s death further muddled the status of two major lawsuits filed behalf of tenants. But attorney Randy Shaw predicted that his clients would not receive any compensation even if they won their case.

“I don’t think his estate is going to have a net plus,” Shaw said.

In the lawsuits, tenants had charged Kaussen with not repairing an elevator in a 10-story Tenderloin building and with refusing to refund security deposits.

Kaussen’s death also will mean higher property taxes for his heirs or buyers of his property, according to Henry McKenzie, chief appraiser for the assessor’s office.

Only property left to surviving spouses is exempt from reappraisal, McKenzie said. He said Skowronek does not qualify as Kaussen’s spouse.

Loan payments on the building are current, according to Dirk Murphy, a spokesman for the federal Department of Housing and Urban Development, which co-insured the loan.

In receivership but owned by Kaussen: