Seniors look back to Willie Brown to fulfill his promises to protect their housing. 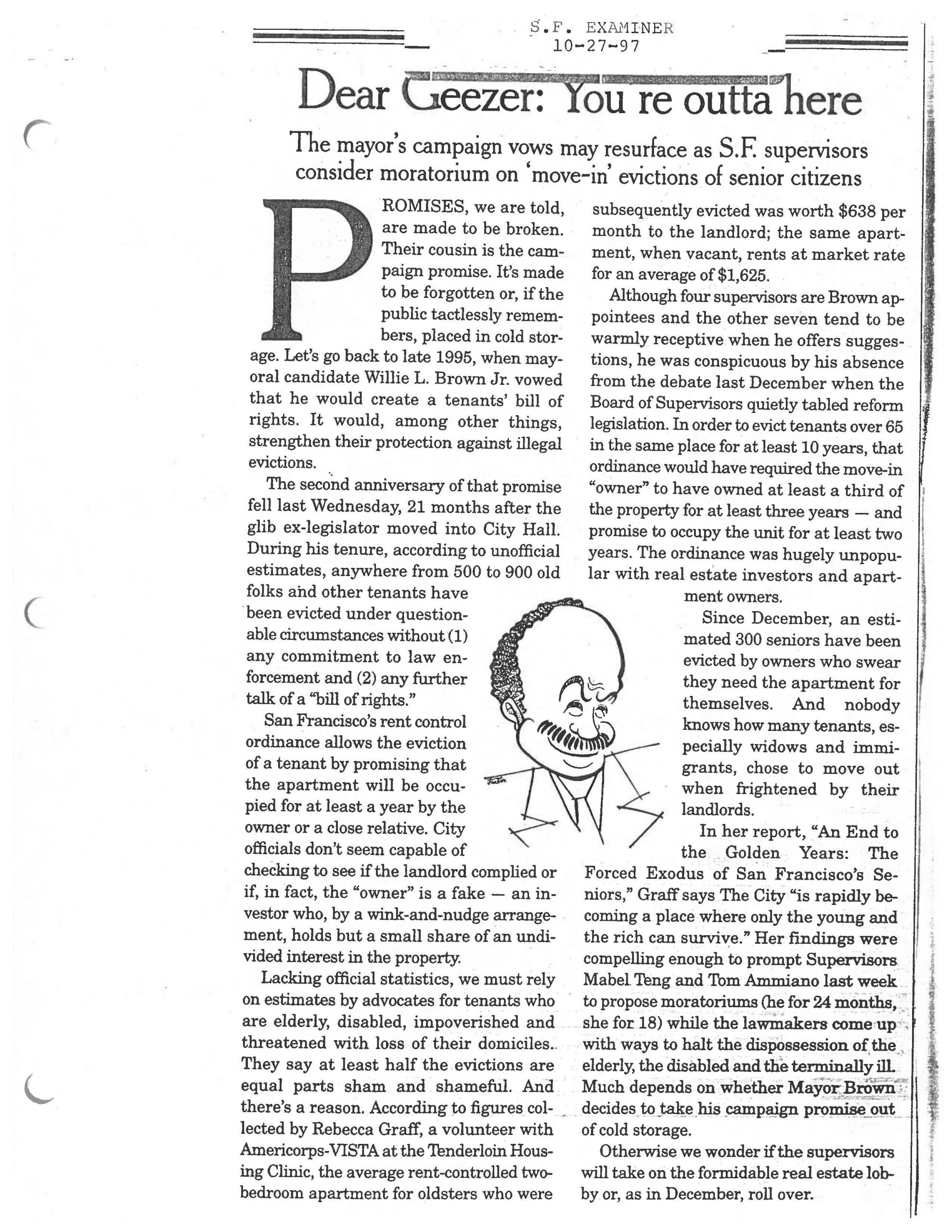 PROMISES, we are told,  are made to be broken. Their cousin is the campaign promise. It’s made to be forgotten or, if the public tactlessly remembers, placed in cold storage. Let’s go back to late 1995, when mayoral candidate Willie L. Brown Jr. vowed that he would create a tenants’ bill of rights. It would, among other things, strengthen their protection against illegal evictions.

The second anniversary of that promise fell last Wednesday, 21 months after the glib ex-legislator moved into City Hall. During his tenure, according to unofficial estimates, anywhere from 500 to 900 old folks and other tenants have been evicted under questionable circumstances without (1) any commitment to law enforcement and (2) any further talk of a “bill of rights.”

San Francisco’s rent control ordinance allows the eviction of a tenant by promising that the apartment will be occupied for at least a year by the owner or a close relative. City officials don’t seem capable of checking to see if the landlord complied or if, in fact, the “owner” is a fake — an investor who, by a wink-and-nudge arrangement, holds but a small share of an undivided interest in the property.

Lacking official statistics, we must rely on estimates by advocates for tenants who are elderly, disabled, impoverished and threatened with loss of their domiciles. They say at least half the evictions are equal parts sham and shameful. And there’s a reason. According to figures collected by Rebecca Graff, a volunteer with Americorps-VISTA at the Tenderloin Housing Clinic, the average rent-controlled two-bedroom apartment for oldsters who were subsequently evicted was worth $638 per month to the landlord; the same apartment, when vacant, rents at market rate for an average of $1,625.

Although four supervisors are Brown appointees and the other seven tend to be warmly receptive when he offers suggestions, he was conspicuous by his absence from the debate last December when the Board of Supervisors quietly tabled reform legislation. In order to evict tenants over 65 in the same place for at least 10 years, that ordinance would have required the move-in “owner” to have owned at least a third of the property for at least three years — and promise to occupy the unit for at least two years. The ordinance was hugely unpopular with real estate investors and apartment owners.

Since December, an estimated 300 seniors have been evicted by owners who swear they need the apartment for themselves. And nobody knows how many tenants, especially widows and immigrants, chose to move out when frightened by their landlords.

In her report, “An End to the Golden Years: The Forced Exodus of San Francisco’s Seniors,” Graff says The City “ is rapidly becoming a place where only the young and the rich can survive.” Her findings were compelling enough to prompt Supervisors Mabel Teng and Tom Ammiano last week to propose moratoriums (he for 24 months, she for 18) while the lawmakers come up with ways to halt the dispossession of the elderly, the disabled and the terminally ill.  Much depends on whether Mayor Brown decides to take his campaign promise out of cold storage.

Otherwise we wonder if the supervisors will take on the formidable real estate lobby or, as in December, roll over.