State supreme courts agree to review a ruling that; required all members and directors of nonprofit law groups be attorneys, required the non-profit to be registered to the state bar, and prohibited contingency agreements. This comes after many non-profits including Tenderloin Housing Clinic were greatly effected by these rulings. 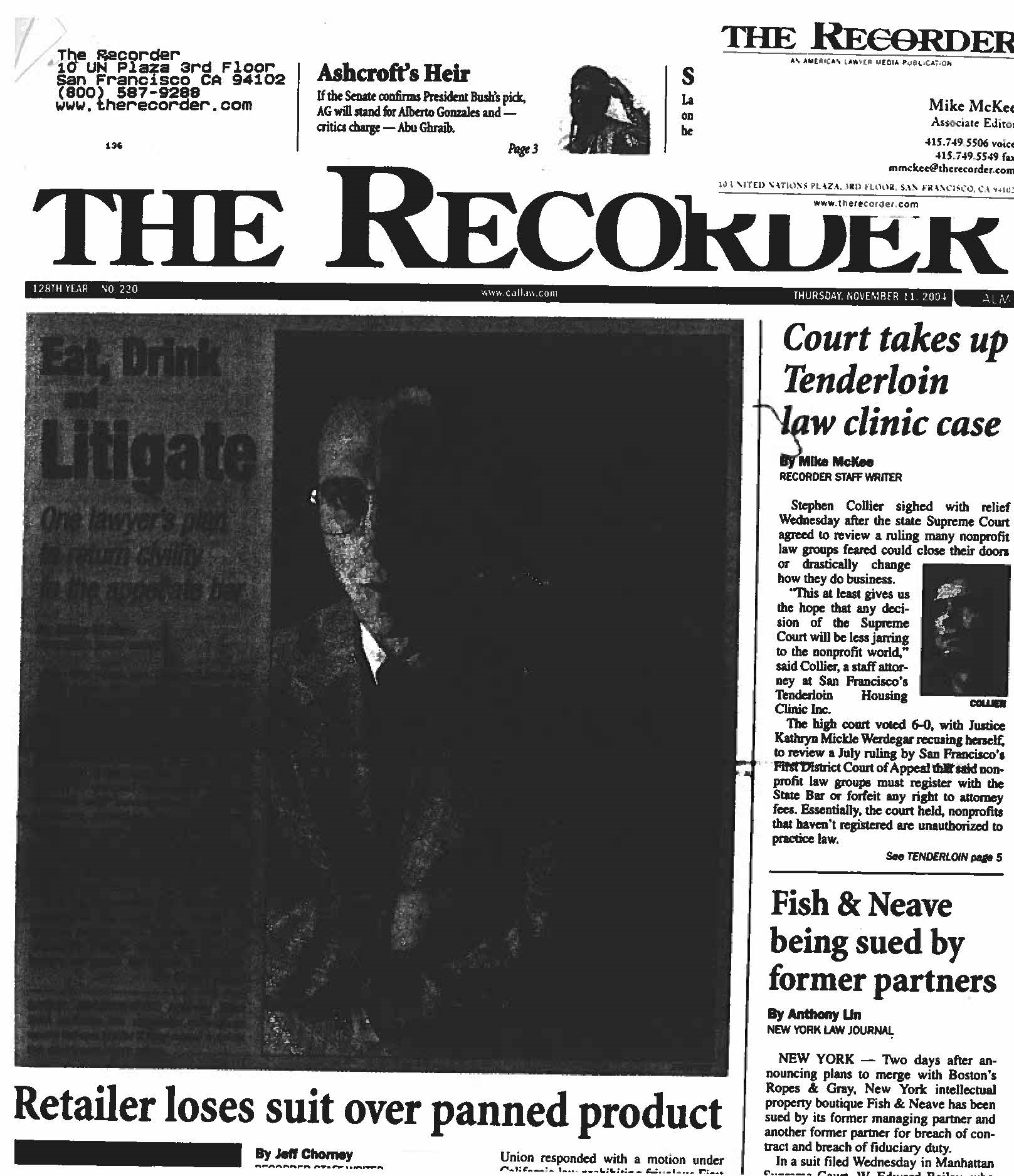 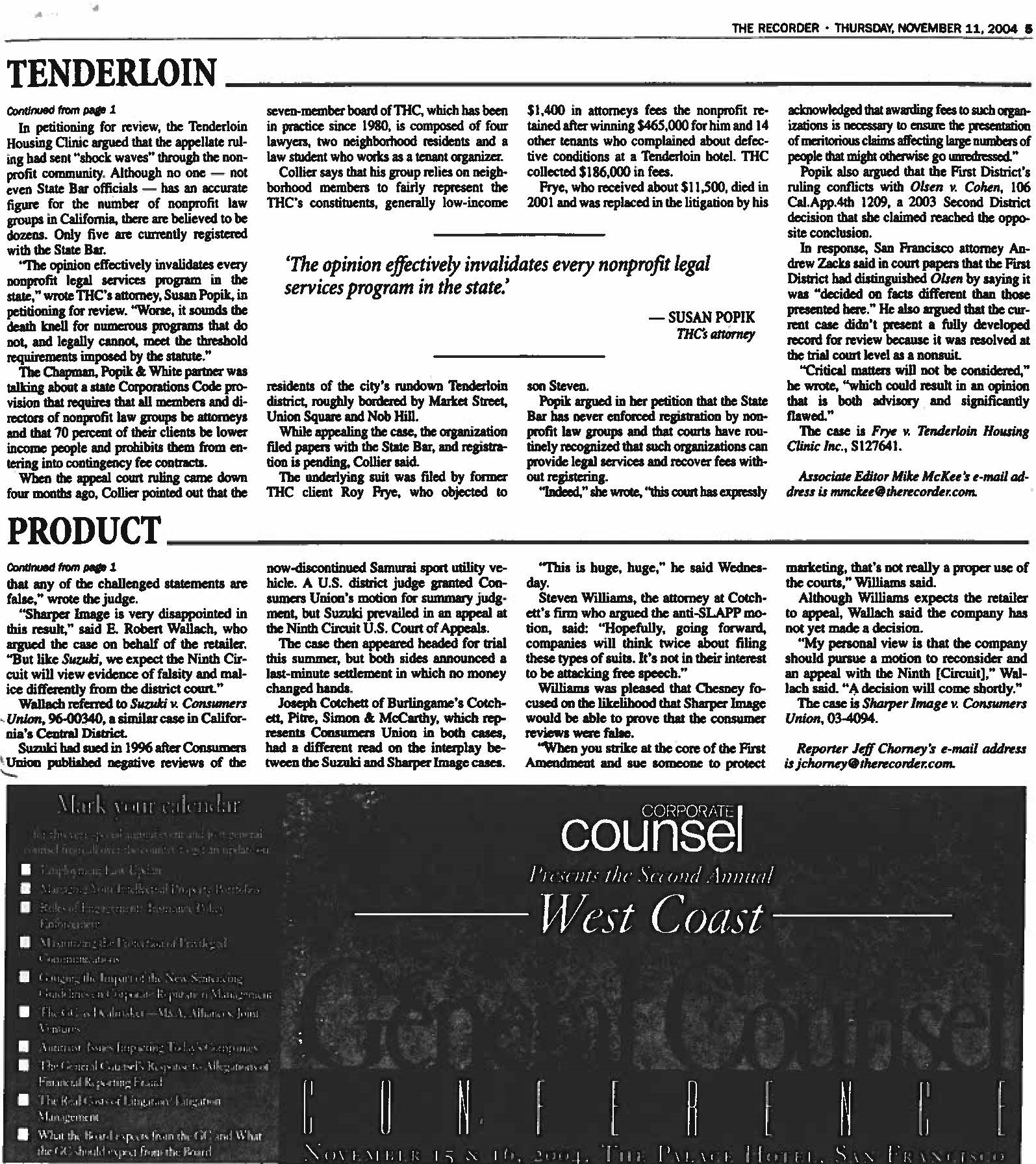 Stephen Collier sighed with relief Wednesday after the state Supreme Court agreed to review a ruling many nonprofit law groups feared could close their doors or drastically change how they do business.

“This at least gives us the hope that any decision of the Supreme Court will be less jarring to the nonprofit world, ” said Collier, a staff attorney at San Francisco’s Tenderloin Housing Clinic Inc.

The high court voted 6-0, with Justice Kathryn Mickle Werdegar recusing herself, to review a July ruling by San Francisco’s First District Court of Appeal that said nonprofit law groups must register with the State Bar or forfeit any right to attorney fees. Essentially, the court held, nonprofits that haven’t registered are unauthorized to practice law.

In petitioning for review, the Tenderloin Housing Clinic argued that the appellate ruling had sent “shock waves” through the non- profit community. Although no one – not even State Bar officials — has an accurate figure for the number of nonprofit law groups in California, there are believed to be dozens. Only five are currently registered with the State Bar.

“The opinion effectively invalidates every nonprofit legal services program in the state,” wrote THC’s attorney, Susan Popik, in petitioning for review. “Worse, it sounds the death knell for numerous programs that do not, and legally cannot, meet the threshold requirements imposed by the statute.”

The Chapman, Popik & White partner was talking about a state Corporations Code provision that requires that all members and directors of nonprofit law groups be attorneys and that 70 percent of their clients be lower income people and prohibits them from entering into contingency fee contracts.

When the appeal court ruling came down four months ago, Collier pointed out that the seven-member board of THC, which has been in practice since 1980, is composed of four lawyers, two neighborhood residents and a law student who works as a tenant organizer.

While appealing the case, the organization filed papers with the State Bar, and registration is pending, Collier said.

The underlying suit was filed by former THC client Roy Frye, who objected to $1,400 in attorneys fees the nonprofit retained after winning $465,000 for him and 14 other tenants who complained about defective conditions at a Tenderloin hotel. THC collected $186,000 in fees.

Popik argued in her petition that the State Bar has never enforced registration by nonprofit law groups and that courts have routinely recognized that such organizations can provide legal services and recover fees without registering.

“Indeed,” she wrote, “this court has expressly acknowledged that awarding fees to such organizations is necessary to ensure the presentation of meritorious claims affecting large numbers of people that might otherwise go unredressed.”

Popik also argued that the First District’s ruling conflicts with Olsen v. Cohen, 106 Cal.App. 4th 1209, a 2003 Second District decision that she claimed reached the opposite conclusion.

In response, San Francisco attorney Andrew Zacks said in court papers that the First District had distinguished Olsen by saying it was “decided on facts different than those presented here.” He also argued that the current case didn’t present a fully developed record for review because it was resolved at the trial court level as a nonsuit.

“Critical matters will not be considered,” he wrote, “which could result in an opinion that is both advisory and significantly flawed.”