New hope for SROs as Code Enforcement starts. The program responsible is called the Code Enforcement Outreach Program, its purpose is to facilitate communication and cooperation between tenants and rental property owners to improve living conditions for all renters. 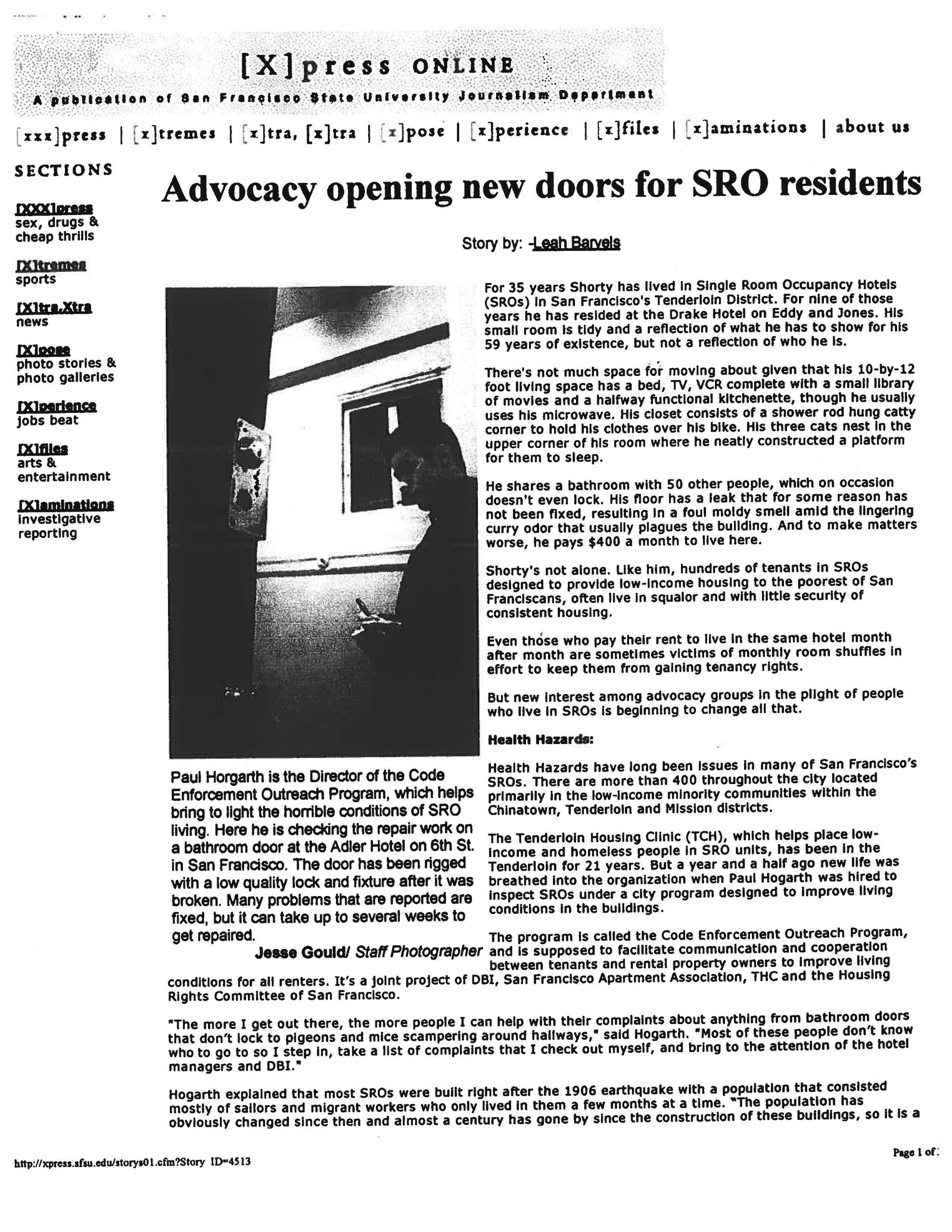 For 35 years Shorty has lived in Single Room Occupancy Hotels (SROs) in San Francisco’s Tenderloin District. For nine of those years he has resided at the Drake Hotel on Eddy and Jones. His small room is tidy and a reflection of what he has to show for his 59 years of existence, but not a reflection of who he is.

There’s not much space for moving about given that his 10-by-12 foot living space has a bed, TV, VCR complete with a small library of movies and a halfway functional kitchenette, though he usually uses his microwave. His closet consists of a shower rod hung catty corner to hold his clothes over his bike. His three cats nest in the upper corner of his room where he neatly constructed a platform for them to sleep.

He shares a bathroom with 50 other people, which on occasion doesn’t even lock. His floor has a leak that for some reason has not been fixed, resulting in a foul moldy smell amid the lingering curry odor that usually plagues the building. And to make matters worse, he pays $400 a month to live here.

Shorty’s not alone. Like him, hundreds of tenants in SROS designed to provide low-income housing to the poorest of San Franciscans, often live in squalor and with little security of consistent housing.

Even those who pay their rent to live in the same hotel month after month are sometimes victims of monthly room shuffles in effort to keep them from gaining tenancy rights.

But new interest among advocacy groups in the plight of people who live in SROs is beginning to change all that.

Health Hazards have long been issued in many of San Francisco’s SROs. There are more than 400 throughout the city located primarily in the low-income minority communities within the Chinatown, Tenderloin and Mission districts.

The Tenderloin Housing Clinic (THC), which helps place low-income and homeless people in SRO units, has been in the Tenderloin for 21 years. But a year and a half ago new life was breathed into the organization when Paul Hogarth was hired to inspect SROs under a city program designed to improve living conditions in the buildings.

The program is called the Code Enforcement Outreach Program, and is supposed to facilitate communication and cooperation between tenants and rental property owners to improve living conditions for all renters. It’s a joint project of DBI, San Francisco Apartment Association, THC and the Housing Rights Committee of San Francisco.

*The more I get out there, the more people I can help with their complaints about anything from bathroom doors that don’t lock to pigeons and mice scampering around hallways,” said Hogarth. “Most of these people don’t know who to go to so I step in, take a list of complaints that I check out myself, and bring to the attention of the hotel managers and DBI.”

Hogarth explained that most SROs were built right after the 1906 earthquake with a population that consisted mostly of sailors and migrant workers who only lived in them a few months at a time.