Roy Frye starts a case against THC with attorneys Andrew Zacks and Paul Utrecht. Claiming that THC can’t charge contingency fees because the organization is not registered with the State Bar, although its attorneys are. In San Francisco Superior Court its ruled that THC did not commit fraud but the rest of the case must go to trial. 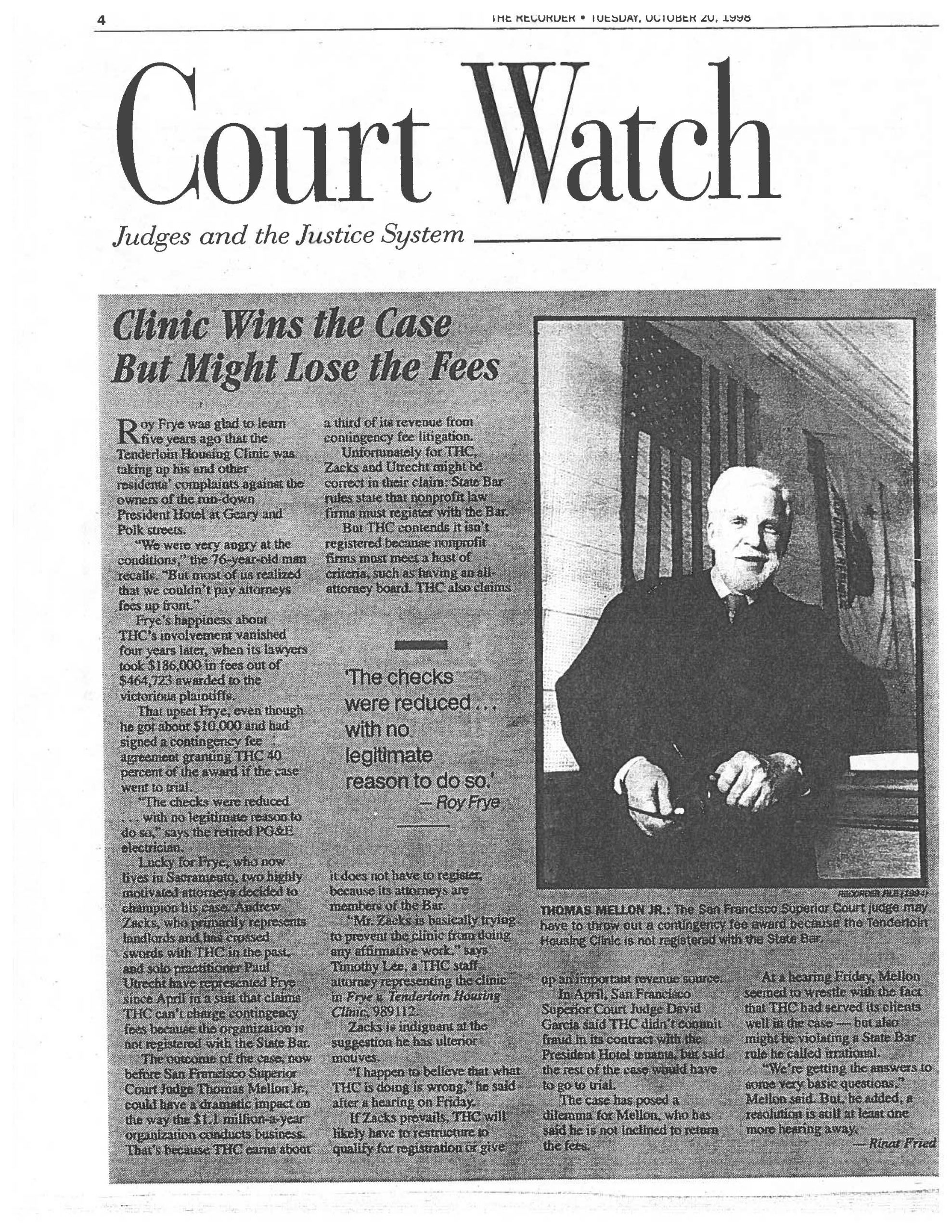 Clinic Wins the Case But Might Lose the Fees

Roy Frye was glad to learn five years ago that the Tenderloin Housing Clinic was taking up his and other residents’ complaints against the owners of the run-down President Hotel at Geary and Polk streets.

“We were very angry at the conditions,” the 76-year-old man recalls. “But most of us realized that we couldn’t pay attorneys fees up front.”

Frye’s happiness about THC’s involvement vanished four years later, when its lawyers took $186,000 in fees out of $464,723 awarded to the victorious plaintiffs.

That upset Frye, even though he got about $10,000 and had signed a contingency fee agreement granting THC 40 percent of the award of the case went to trial.

“The checks were reduced… with no legitimate reason to do so,” says the retired PG&E electrician.

Lucky for Frye, who now lives in Sacramento, two highly motivated attorneys decided to champion his case. Andrew Zacks, who primarily represents landlords and has crossed swords with THC in the past, and solo practitioner Paul Utrecht have represented Frye since April in a suit that claims THC can’t charge contingency fees because the organization is not registered with the State Bar.

The outcome of the case, now before San Francisco Superior Court Judge Thomas Mellon Jr., could have a dramatic impact on the way the $1.1 million-a-year organization conducts business. That’s because THC earns about a third of its revenue from contingency fee litigation.

Unfortunately for THC, Zacks and Utrecht might be correct in their claim: State Bar rules state that nonprofit law firms must register with the Bar.

But THC contends it isn’t registered because nonprofit firms must meet a host of criteria, such as having an all-attorney board. THC also claims it does not have to register, because its attorneys are members of the Bar.

Zacks is indignant at the suggestion he has ulterior motives.

“I happen to believe that what THC is doing is wrong,” he said after a hearing on Friday.

If Zacks prevails, THC will likely have to restructure to qualify for registration or give up an important revenue source.

In April, San Francisco Superior Court Judge David Garcia said THC didn’t commit fraud in its contract with the President Hotel tenants, but said the rest of the case would have to go to trial.

The case has posed a dilemma for Mellon, who has said he is not inclined to return the fees.

At a hearing Friday, Mellon seemed to wrestle with the fact that THC has served its clients well in the case — but also might be violating a State Bar rule he called irrational.

“We’re getting the answers to some very basic questions.” Mellon said. But, he added, a resolution is still at least one more hearing away.