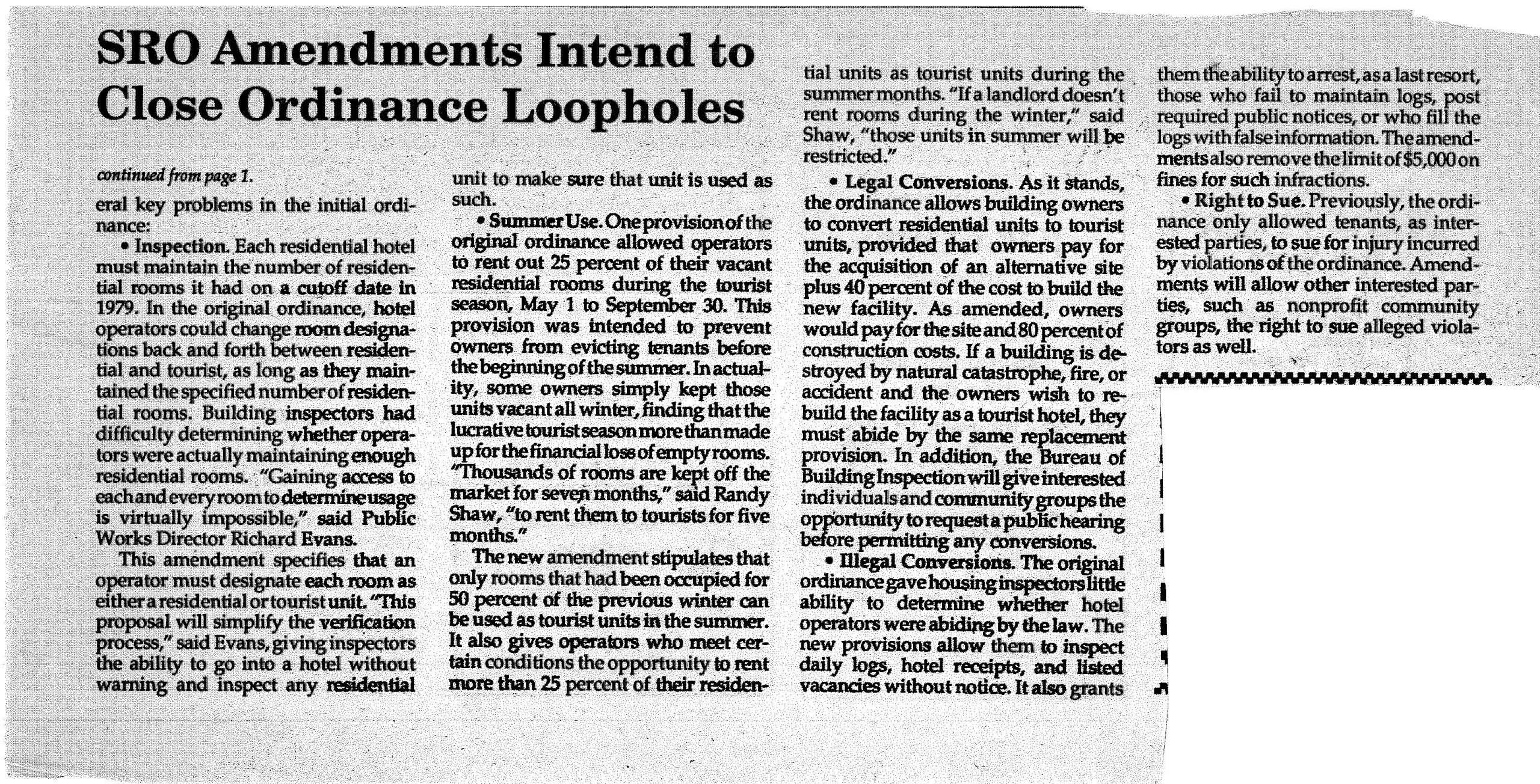 Supervisor Nancy Walker introduced changes to the residential hotel conversion ordinance last month that a spokesperson for the hotel industry has warned would be a death sentence to residential hotels.

Any more restrictive amendments to the residential hotel conversion ordinance “would lead to one thing–the closure of hotels,” Bob Jacobs, executive director of the San Francisco Hotel Association, said last spring when a task force appointed by Mayor Art Agnos studied the ordinance.

But activists say the new amendments will stop the loss of much-needed housing to tourist hotel rooms. “This ordinance never had any teeth, and as a result, caused the loss of hundreds of hotel rooms,” said Randy Shaw of the Tenderloin Housing Clinic. “If an ordinance like (the proposed amended version) had been implemented in 1981 we wouldn’t be in this mess today.”

Shaw emphasized that most residential hotel owners already abide by the laws and will not be affected. Still, the ones that do violate the ordinance are squeezing an already tight affordable housing market. If 10 percent of owners violate the law, he said, they would make unavailable 1,500 residential hotel units.

Intended to tighten the ordinance and facilitate enforcement, proposed changes introduced at the August 15 Board of Supervisors meeting would increase the cost of legal conversion, strengthen the powers of housing inspectors, and toughen penalties. Hotel owners say they are convenient scapegoats, and that they should not be bound by laws that were established a decade ago. “We can’t be forced to make up for the city’s homeless crisis,” said Jacobs.

The battle now returns to the supervisors’ chambers, where the 1981 ordinance was enacted. The amendments are due to go before a public hearing of the supervisors’ Land Use Committee on Tuesday, September 26. The changes attempt to solve several key problems in the initial ordinance:

This amendment specifies that an operator must designate each room as either a residential or tourist unit. “This proposal will simplify the verification process,” said Evans, giving inspectors the ability to go into a hotel without warning and inspect a residential unit to make sure that unit is used as such.

Summer Use. One provision of the original ordinance allowed operators to rent out 25 percent of their vacant residential rooms during the tourist season, May 1 to September 30. This provision was intended to prevent owners from evicting tenants before the beginning of the summer. In actuality, some owners simply kept those units vacant all winter, finding that the lucrative tourist season more than made up for the financial loss of empty rooms. “Thousands of rooms are kept off the market for seven months.”

The new amendment stipulates that only rooms that had been occupied for 50 percent of the previous winter can be used as tourist units in the summer. It also gives operators who meet certain conditions the opportunity to rent more than 25 percent of their residential units as tourist units during the summer months. “If a landlord doesn’t rent rooms during the winter,” said Shaw, “those units in summer will be restricted.”

Legal Conversions. As it stands, the ordinance allows building owners to convert residential units to tourist units, provided that owners pay for the acquisition of an alternative site plus 40 percent of the cost to build the new facility. As amended, owners would pay for the site and 80 percent of construction costs. If a building is destroyed by natural catastrophe, fire, or accident and the owners wish to rebuild the facility as a tourist hotel, they must abide by the same replacement provision. In addition, the Bureau of Building Inspection will give interested individuals and community groups the opportunity to request a public hearing before permitting any conversions.

Illegal Conversions. The original ordinance gave housing inspectors little ability to determine whether hotel operators were abiding by the law. The new provisions allow them to inspect daily logs, hotel receipts, and listed vacancies without notice. It also grants them the ability to arrest, as a last resort, those who fail to maintain logs, post required public notices, or who fill the logs with false information. The amendments also remove the limit of $5,000 on fines for such infractions.