Mayor Art Agnos reflects on progress made for homeless people in San Francisco, and speaks of future plans to continue this progress. 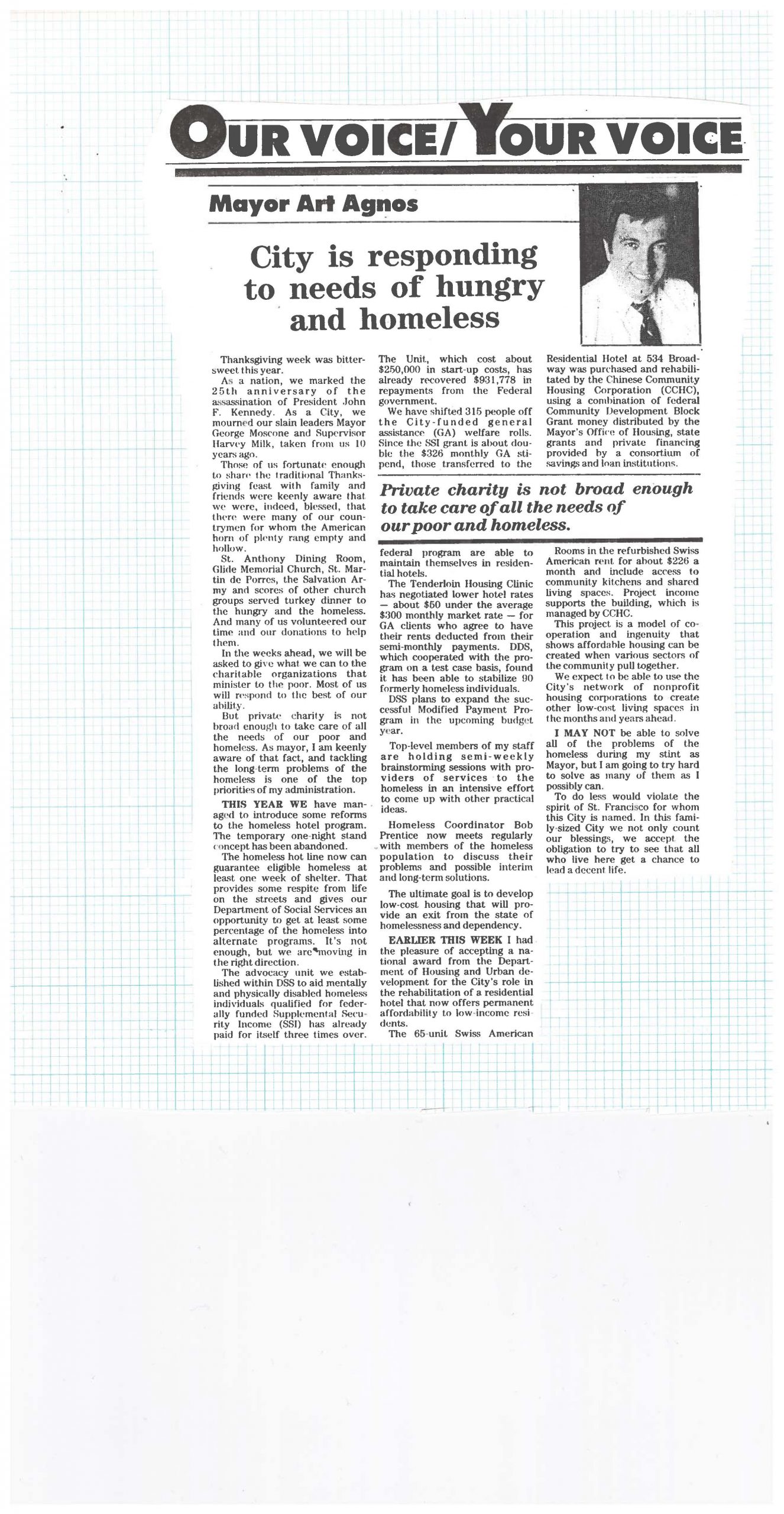 City is Responding to Needs of Hungry and Homeless

As a nation, we marked the 25th anniversary of the assassination of President John F. Kennedy. As a City, we mourned our slain leaders Mayor George Moscone and Supervisor Harvey Milk, taken from us 10 years ago.

Those of us fortunate enough to share the traditional Thanksgiving feast with family and friends were keenly aware that we were, indeed, blessed, that there were many of our countrymen for whom the American horn of plenty rang empty and hollow.

St. Anthony Dining Room, Glide Memorial Church, St. Martin de Porres, the Salvation Army and scores of other church groups served turkey dinner to the hungry and the homeless. And many of us volunteered our time and our donations to help them.

In the weeks ahead, we will be asked to give what we can to the charitable organizations that minister to the poor. Most of us will respond to the best of our ability.

But private charity is not broad enough to take care of all the needs of our poor and homeless. As mayor, I am keenly aware of that fact, and tackling the long-term problems of the homeless is one of the top priorities of my administration.

THIS YEAR WE have managed to introduce some reforms to the homeless hotel program. The temporary one-night stand concept has been abandoned.

The homeless hotline now can guarantee eligible homeless at least one week of shelter. That provides some respite from life on the streets and gives our Department of Social Services an opportunity to get at least some percentage of the homeless into alternate programs. It’s not enough, but we are moving in the right direction.

The advocacy unit we established within DSS to aid mentally and physically disabled homeless individuals qualified for federally funded Supplemental Security Income (SSI) has already paid for itself three times over.

The Unit, which cost about $250,000 in start-up costs, has already recovered $931,778 in repayments from the Federal government.

We have shifted 315 people off the City-funded general assistance (GA) welfare rolls. Since the SSI grant is about double the $326 monthly GA stipend, those transferred to the federal program are able to maintain themselves in residential hotels.

The Tenderloin Housing Clinic has negotiated lower hotel rates — about $50 under the average $300 monthly market rate — for GA clients who agree to have their semi-monthly payments.

Top- level members of my staff are holding semi-weekly brainstorming sessions with providers of services to the homeless in an intensive effort to come up with other practical ideas.

Homeless Coordinator Bob Prentice now meets regularly with members of the homeless population to discuss their problems and possible interim and long-term solutions.

The ultimate goal is to develop low-cost housing that will provide an exit from the state of homelessness and dependency.

EARLIER THIS WEEK I had the pleasure of accepting a national award from the Department of Housing and Urban development for the City’s role in the rehabilitation of a residential hotel that now offers permanent affordability to low-income residents.

The 65-unit Swiss American Residential Hotel at 534 Broadway was purchased and rehabilitated by the Chinese Community Housing Corporation (CCHC), using a combination of federal Community Development Block Grant money distributed by the Mayor’s Office of Housing, state grants and private financing provided by a consortium of savings and loan institutions.

Rooms in the refurbished Swiss American rent for about $226 a month and include access to community kitchens and shared living spaces. Project income supports the building, which is managed by CCHC.

This project is a model of cooperation and ingenuity that shows affordable housing can be created when various sectors of the community pull together.

We expect to be able to use the City’s network of nonprofit housing corporations to create other low-cost living spaces in the months and years ahead.

I MAY NOT be able to solve all of the problems of the homeless during my stint as Mayor, but I am going to try hard to solve as many of them as I possibly can.

To do less would violate the spirit of St. Francisco for whom this City is named. In this family-sized City we not only count our blessings, we accept the obligation to try to see that all who live here get a chance to lead a decent life.

—Private charity is not broad enough to take care of all the needs of our poor and homeless.