Buildings and units with significant code violations or those erected illegally are found to remain unabated by the Bureau of Building Inspection for years. 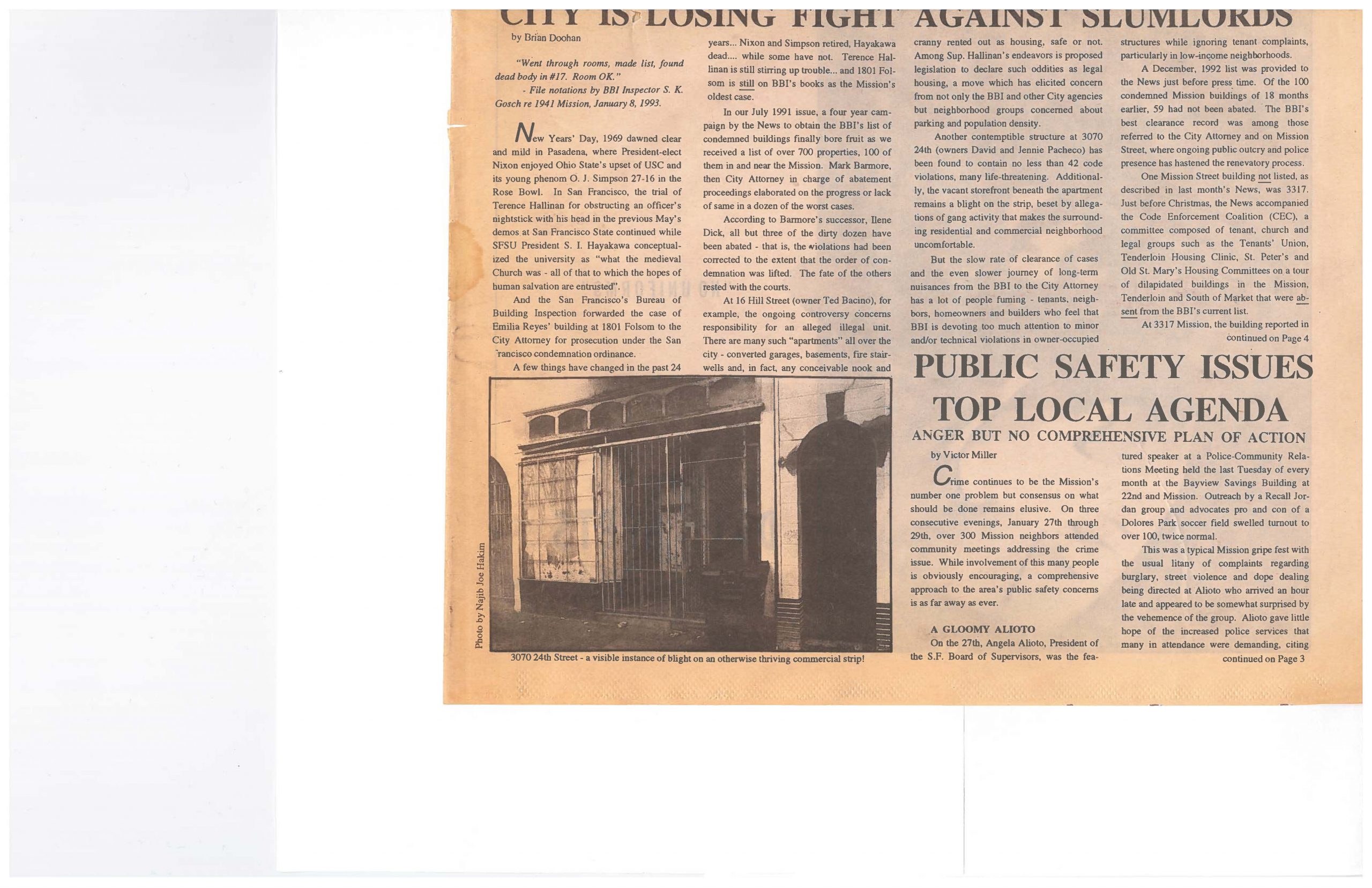 City is Losing Fight Against Slumlords

New Years’ Day, 1969 dawned clear and mild in Pasadena, where President-elect Nixon enjoyed Ohio State’s upset of USC and its young phenom O.J. Simpson 27-16 in the Rose Bowl. In San Francisco, the trial of Terence Hallinan for obstructing an officer’s nightstick with his head in the previous May’s demos at San Francisco State continued while SFSU President S.I. Hayakawa conceptualized the university as “what the medieval Church was – all of that to which the hopes of human salvation are entrusted.”

And the San Francisco’s Bureau of Building Inspection forwarded the case of Emilia Reyes’ building at 1801 Folsom to the City Attorney for prosecution under the San Francisco condemnation ordinance.

A few things have changed in the past 24 years…Nixon and Simpson retired, Hayakawa dead… while some have not. Terence Hallinan is still stirring up trouble…and 1801 Folsom is still on BBI’s books as the Mission’s oldest case.

In our July 1991 issue, a four year campaign by the News to obtain the BBI’s list of condemned buildings finally bore fruit as we received a list of over 700 properties, 100 of them in and near the Mission. Mark Barmore, then City Attorney in charge of abatement proceedings elaborated on the progress or lack of same in a dozen of the worst cases.

According to Barmore’s successor, Ilene Dick, all but three of the dirty dozen have been corrected to the extent that the order of condemnation was lifted. The fate of the others rested with the courts.

At 16 Hill Street (owner Ted Bacino), for example, the ongoing controversy concerns responsibility for an alleged illegal unit. There are many such “apartments” all over the city – converted garages, basements, fire stairwells and, in fact, any conceivable nook and cranny rented out as housing, safe or not. Among Sup. Hallinan’s endeavors is proposed legislation to declare such oddities as legal housing, a move which has elicited concern from not only the BBI and other City agencies but neighborhood groups concerned about parking and population density.

Another contemptible structure at 3070 24th (owners David and Jennie Pacheco) has been found to contain no less than 42 code violations, many life-threatening. Additionally, the vacant storefront beneath the apartment remains a blight on the strip, beset by allegations of gang activity that makes the surrounding residential and commercial neighborhood uncomfortable.

But the slow rate of clearance of cases and the even slower journey of long-term nuisances from the BBI to the City Attorney has a lot of people fuming – tenants, neighbors, homeowners and builders who feel that BBI is devoting too much attention to minor and/or technical violations in owner-occupied structures while ignoring tenant complaints, particularly in low-income neighborhoods.

A December 1992 list was provided to the News just before press time. Of the 100 condemned
Mission buildings of 18 months earlier, 59 had not been abated. The BBI’s best clearance record was among those referred to the City Attorney and on Mission Street, where ongoing public outcry and police presence has hastened the renevatory process.

One Mission Street building not listed, as described in last month’s News, was 3317. Just before Christmas, the News accompanied the Code Enforcement Coalition (CEC), a committee composed of tenant, church and legal groups such as the Tenants’ Union, Tenderloin Housing Clinic, St. Peter’s and Old St. Mary’s Housing Clinic Committees on a tour of dilapidated buildings in the Mission, Tenderloin and South of Market that were absent from the BBI’s current list.