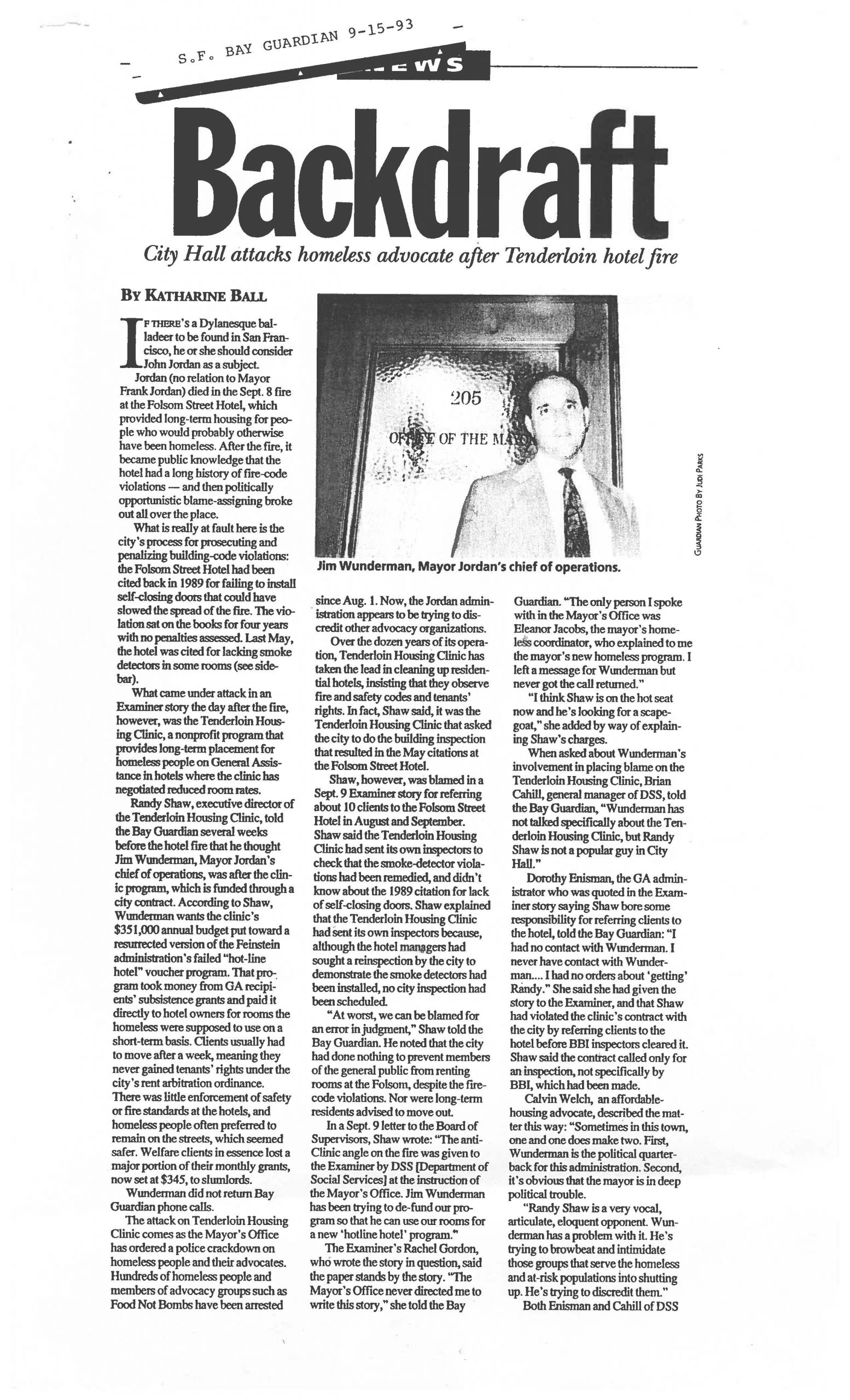 IF THERE’s a Dylanesque balladeer to be found in San Francisco, he or she should consider John Jondan as a subject.

Jordan (no relation to Mayor Frank Jordan) died in the Sept. 8 fire at the Folsom Street Hotel, which provided long-term housing for people who would probably otherwise have been homeless. After the fire, it became public knowledge that the hotel had a long history of fire-code violations — and then politically opportunistic blame-assigning broke out all over the place.

What is really at fault here is the city’s process for prosecuting and penalizing building-code violations: the Folsom Street Hotel had been cited back in 1989 for failing to install self-closing doors that could have slowed the spread of the fire. The violation sat on the books for four years with no penalties assessed. Last May, the hotel was cited for lacking smoke detectors in some rooms (see sidebar).

What came under attack in an Examiner story the day after the fire, however, was the Tenderloin Housing Clinic, a nonprofit program that provides long-term placement for homeless people on General Assistance in hotels where the clinic has negotiated reduced room rates.

Randy Shaw, executive director of the Tenderloin Housing Clinic, told the Bay Guardian several weeks before the hotel fire that he thought Jim Wunderman, Mayor Jordan’s chief of operations, was after the clinic program, which is funded through a city contract. According to Shaw, Wunderman wants the clinic’s $351,000 annual budget put toward a resurrected version of the Feinstein administration’s failed “hot-line hotel” voucher program. That program took money from GA recipients’ subsistence grants and paid it directly to hotel owners for rooms the homeless were supposed to use on a short-term basis. Clients usually had to move after a week, meaning they never gained tenants’ rights under the city’s rent arbitration ordinance. There was little enforcement of safety or fire standards at the hotels, and homeless people often preferred to remain on the streets, which seemed safer. Welfare clients in essence lost a major portion of their monthly grants, now set at $345, to slumlords.

The attack on Tenderloin Housing Clinic comes as the Mayor’s Office has ordered a police crackdown on homeless people and their advocates. Hundreds of homeless people and members of advocacy groups such as Food Not Bombs have been arrested since Aug. 1. Now, the Jordan administration appears to be trying to discredit other advocacy organizations.

“At worst, we can be blamed for an error in judgment,” Shaw told the Bay Guardian. He noted that the city had done nothing to prevent members of the general public from renting rooms at the Folsom, despite the fire- code violations. Nor were long-term residents advised to move out.

In a Sept. 9 letter to the Board of Supervisors, Shaw wrote: “The anti- Clinic angle on the fire was given to the Examiner by DSS [Department of Social Services) at the instruction of the Mayor’s Office. Jim Wunderman has been trying to de-fund our program so that he can use our rooms for a new ‘hotline hotel program.”

The Examiner’s Rachel Gordon, who wrote the story in question, said the paper stands by the story. “The Mayor’s Office never directed me to write this story,” she told the Bay Guardian. “The only person I spoke with in the Mayor’s Office was Eleanor Jacobs, the mayor’s homeless coordinator, who explained to me the mayor’s new homeless program. I left a message for Wunderman but never got the call returned.”

“I think Shaw is on the hot seat now and he’s looking for a scapegoat,” she added by way of explaining Shaw’s charges.

Dorothy Enisman, the GA administrator who was quoted in the Examiner story saying Shaw bore some responsibility for referring clients to the hotel, told the Bay Guardian: “I had no contact with Winderman. I never have contact with Wunderman…. I had no orders about getting’ Randy.” She said she had given the story to the Examiner, and that Shaw had violated the clinic’s contract with the city by referring clients to the hotel before BBI inspectors cleared it. Shaw said the contract called only for an inspection, not specifically by BBI, which had been made.

Calvin Welch, an affordable housing advocate, described the matter this way: “Sometimes in this town, one and one does make two. First, Wunderman is the political quarterback for this administration. Second, it’s obvious that the mayor is in deep political trouble.

“Randy Shaw is a very vocal, articulate, eloquent opponent. Wunderman has a problem with it. He’s trying to browbeat and intimidate those groups that serve the homeless and at-risk populations into shutting up. He’s trying to discredit them.”