Critics of the Bureau of Building Inspection continue to argue its “enforcement” process gives landlords too much time and too little penalties when cited for building improvements. 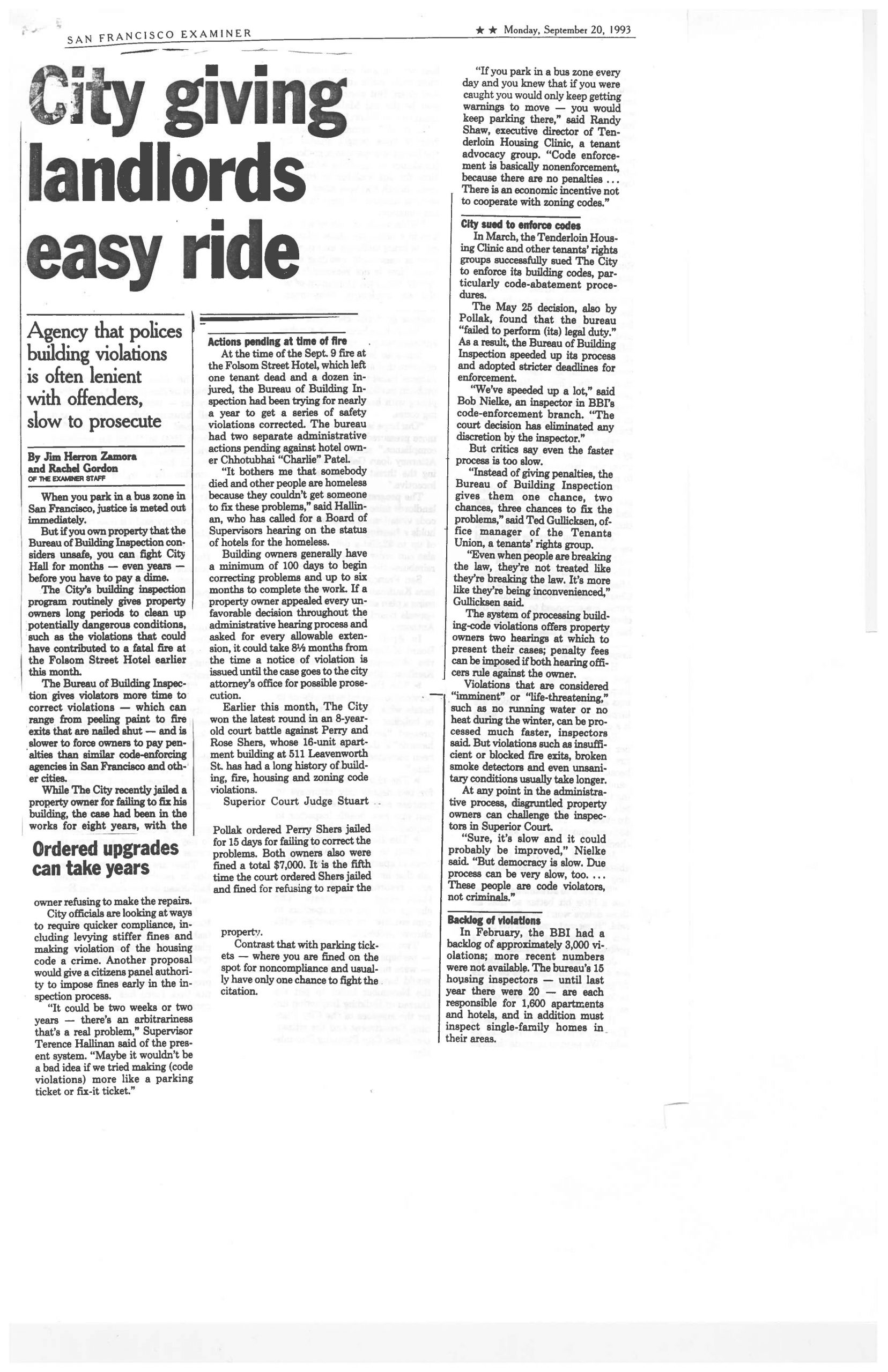 Agency that polices building violations is often lenient with offenders, slow to prosecute

When you park in a bus zone in San Francisco, justice is meted out immediately.

But if you own property that the Bureau of Building Inspection considers unsafe, you can fight City Hall for months – even years – before you have to pay a dime.

The City’s building inspection program routinely gives property owners long periods to clean up potentially dangerous conditions, such as the violations that could have contributed to a fatal fire at the Folsom Street Hotel earlier this month.

The Bureau of Building Inspection gives violators more time to correct violations – which can range from peeling paint to fire exits that are nailed shut – and is slower to force owners to pay penalties than similar code-enforcing agencies in San Francisco and other cities.

While The City recently jailed a property owner for failing to fix his building, the case had been in the works for eight years, with the owner refusing to make the repairs.

City officials are looking at ways to require quicker compliance, including levying stiffer fines and making violation of the housing code a crime. Another proposal would give a citizens panel authority to impose fines early in the inspection process.

“It could be two weeks or two years – there’s an arbitrariness that’s a real problem,” Supervisor Terence Hailinan said of the present system. “Maybe it wouldn’t be a bad idea if we tried making (code violations) more like a parking ticket or fix-it ticket.”

Actions pending at time of fire

At the time of the Sept. 9 fire at the Folsom Street Hotel, which left one tenant dead and a dozen injured, the Bureau of Building Inspection had been trying for nearly a year to get a series of safety violations corrected. The bureau had two separate administrative actions pending against hotel owner Chhotubhai “Charlie” Patel.

“It bothers me that somebody died and other people are homeless because they couldn’t get someone to fix these problems,” said Hallinan, who has called for a Board of Supervisors hearing on the status of hotels for the homeless.

Building owners generally have a minimum of 100 days to begin correcting problems and up to six months to complete the work. If a property owner appealed every unfavorable decision throughout the administrative hearing process and asked for every allowable extension, it could take 8 ½ months from the time a notice of violation is issued until the case goes to the city attorney’s office for possible prosecution.

Earlier this month, The City won the latest round in an 8-year-old court battle against Perry and Rose Shers, whose 16-unit apartment building at 511 Leavenworth St. has had a long history of building, fire, housing and zoning code violations.

Superior Court Judge Stuart Pollak ordered Perry Shers jailed for 15 days for failing to correct the problems. Both owners also were fined a total $7,000. It is the fifth time the court ordered Shers jailed and fined for refusing to repair the property.

Contrast that with parking tickets — where you are fined on the spot for noncompliance and usually have only one chance to fight the citation.

“If you park in a bus zone every day and you knew that if you were caught you would only keep getting warnings to move – you would keep parking there,” said Randy Shaw, executive director of Tenderloin Housing Clinic, a tenant advocacy group. “Code enforcement is basically nonenforcement, because there are no penalties… There is an economic incentive not to cooperate with zoning codes.”

In March, the Tenderloin Housing Clinic and other tenants’ rights groups successfully sued The City to enforce its building codes, particularly code-abatement procedures.

The May 25 decision, also by Pollak, found that the bureau “failed to perform (its) legal duty.” As a result, the Bureau of Building Inspection speeded up its process and adopted stricter deadlines for enforcement.

“We’ve speeded up a lot,” said Bob Nielke, an inspector in BBI’s code-enforcement branch. “The court decision has eliminated any discretion by the inspector.”

But critics say even the faster process is too slow.

“Instead of giving penalties, the Bureau of Building Inspection gives them one chance, two chances, three chances to fix the problems,” said Ted Gullicksen, office manager of the Tenants Union, a tenants’ rights group.

The system of processing building-code violations offers property owners two hearings at which to present their cases; penalty fees can be imposed if both hearing officers rule against the owner.

Violations that are considered “imminent” or “life-threatening,” such as no running water or no heat during the winter, can be processed much faster, inspectors said. But violations such as insufficient or blocked fire exits, broken smoke detectors and even unsanitary conditions usually take longer.

At any point in the administrative process, disgruntled property owners can challenge the inspectors in Superior Court.

“Sure, it’s slow and it could probably be improved,” Nielke said. “But democracy is slow. Due process can be very slow, too. …These people are code violators, not criminals.”

In February, the BBI had a backlog of approximately 3,000 violations; more recent numbers were not available. The bureau’s 15 housing inspectors – until last year there were 20 – are each responsible for 1,600 apartments and hotels, and in addition must inspect single-family homes in their areas.