The BBI asks The City to go after Mission Street Hotel owner that has repetitively violated codes and owes fines. 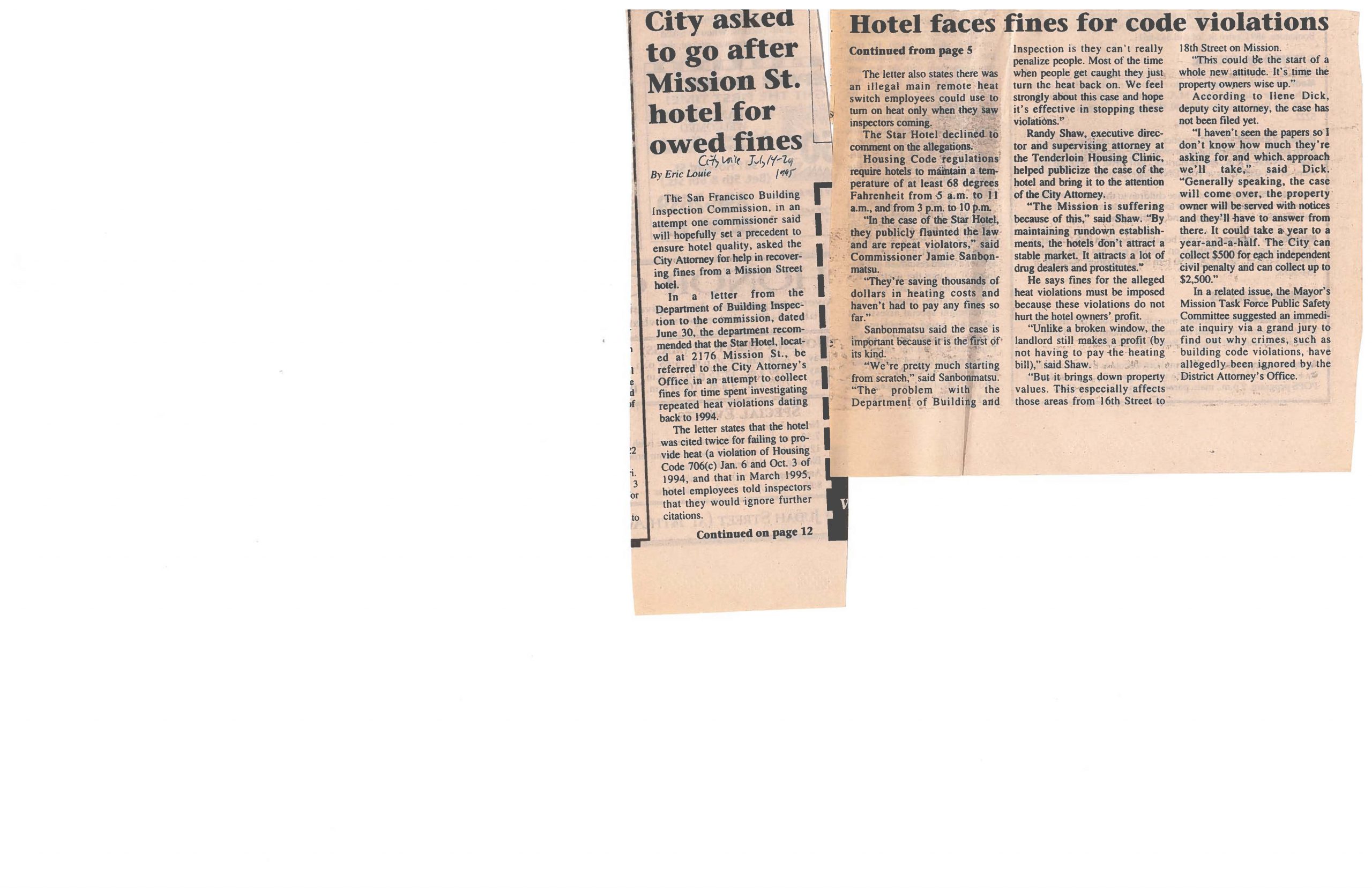 The San Francisco Building Inspection Commission, in an attempt one commissioner said will hopefully set a precedent to ensure hotel quality, asked the City Attorney for help in recovering fines from a Mission Street hotel.

In a letter from the Department of Building Inspection to the commission, dated June 30, the department recommended that the Star Hotel, located at 2176 Mission St., be referred to the City Attorney’s Office in an attempt to collect fines for time spent investigating repeated heat violations dating back to 1994.

The letter states that the hotel was cited twice for failing to provide heat (a violation of Housing Code 706(c) Jan. 6 and Oct. 3 of 1994, and that in March 1995, hotel employees told inspectors that they would ignore further citations.

The letter also states there was an illegal main remote heat switch employees could use to turn on heat only when they saw inspectors coming.

The Star Hotel declined to comment on the allegations.

Housing Code regulations require hotels to maintain a temperature of at least 68 degrees Fahrenheit from 5 a.m. to 11 a.m., and from 3 p.m. to 10 p.m.

“In the case of the Star Hotel, they publicly flaunted the law and are repeat violators,” said Commissioner Jamie Sanbonmatsu.

“They’re saving thousands of dollars in heating costs and haven’t had to pay any fines so far.”

Sanbonmatsu said the case is important because it is the first of its kind.

“We’re pretty much starting from scratch,” said Sanbonmatsu. “The problem with the Department of Building and Inspection is they can’t really penalize people. Most of the time when people get caught they just turn the heat back on. We feel strongly about this case and hope it’s effective in stopping these violations.”

Randy Shaw, executive director and supervising attorney at the Tenderloin Housing Clinic, helped publicize the case of the hotel and bring it to the attention of the City Attorney.

“The Mission is suffering because of this,” said Shaw. “By maintaining rundown establishments, the hotels don’t attract a stable market. It attracts a lot of drug dealers and prostitutes.”

He says fines for the alleged heat violations must be imposed because these violations do not hurt the hotel owners’ profit.

“Unlike a broken window, the landlord still makes a profit (by not having to pay the heating bill),” said Shaw.

“But it brings down property values. This especially affects those areas from 16th Street to 18th Street on Mission.

“This could be the start of a whole new attitude. It’s time the property owners wise up.”

According to Ilene Dick, deputy city attorney, the case has not been filed yet.

“I haven’t seen the papers so I don’t know how much they’re asking for and which approach we’ll take,” said Dick. “Generally speaking, the case will come over, the property owner will be served with notices and they’ll have to answer from there. It could take a year to a year-and-a-half. The City can collect $500 for each independent civil penalty and can collect up to $2,500.”

In a related issue, the Mayor’s Mission Task Force Public Safety Committee suggested an immediate inquiry via a grand jury to find out why crimes, such as building code violations, have allegedly been ignored by the District Attorney’s Office.