Affordable housing proponents pushed for greater flexibility in the 2002 inclusionary housing law, to allow for more housing for low-income residents. 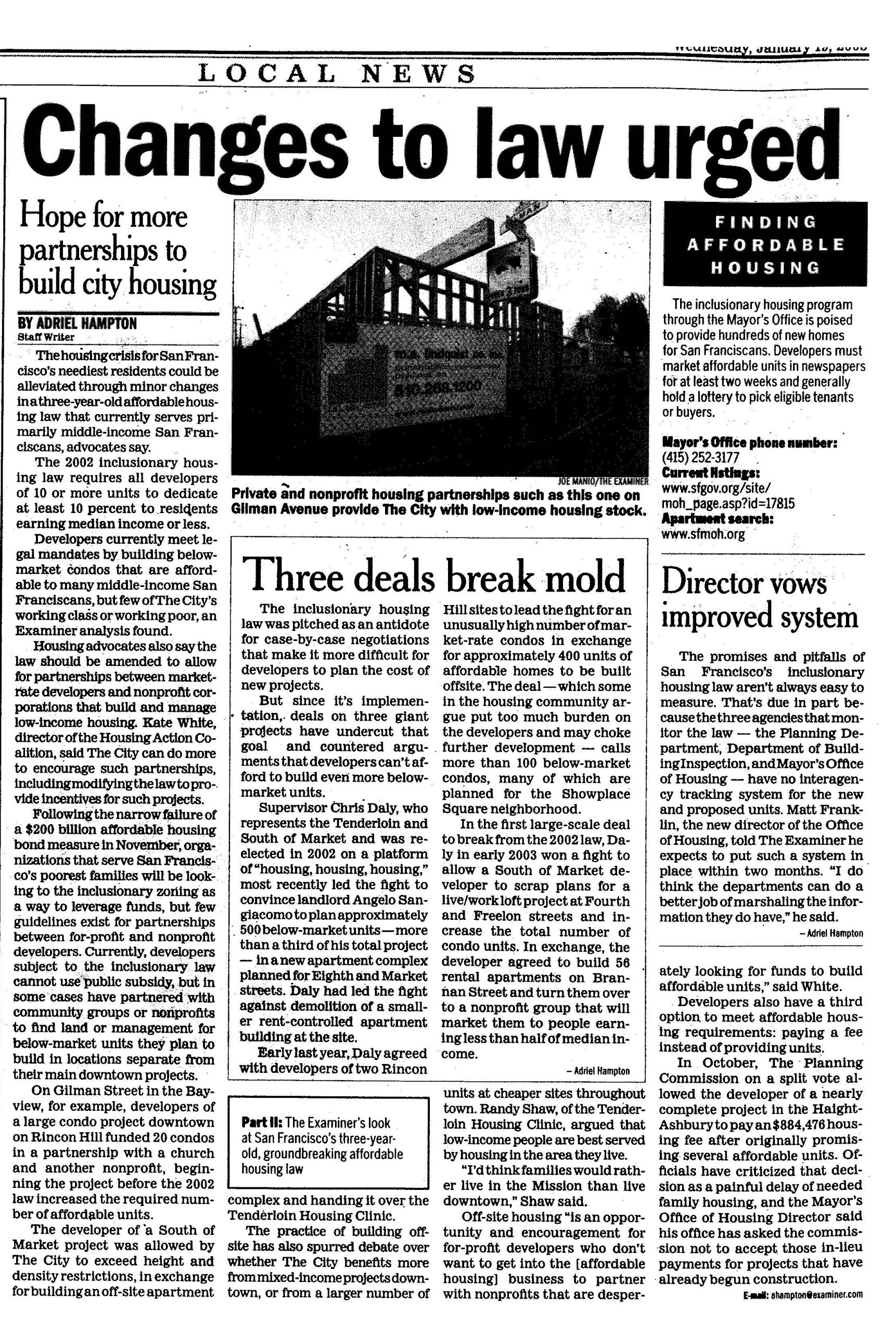 The 2002 inclusionary housing law requires all developers of 10 percent to residents earning median income or less.

Developers currently meet legal mandates by building below-market condos that are affordable to many middle-income San Franciscans, but few of The City’s working class or working poor, an Examiner analysis found.

Housing advocates also say the law should be amended to allow for partnerships between market-rate developers and nonprofit corporations that build and manage low-income housing. Kate White, Director of the Housing Action Coalition, said The City can do more to encourage such partnerships, including modifying the law to provide incentives for such projects.

Following the narrow failure of a $200 billion affordable housing bond measure in November, organizations that serve San Francisco’s poorest families will be looking to the inclusionary zoning as a way to leverage funds, but few guidelines exist for partnerships between for-profit and nonprofit developers. Currently, developers subject to the inclusionary law cannot use public subsidy, but in some cases have partnered with community groups or nonprofits to find land or management for below-market units they plan to build in locations separate from their main downtown projects.

On Gilman Street in the Bayview, for example, developers of a large condo project downtown on Rincon Hill funded 20 condos in a partnership with a church and another nonprofit, beginning the project before the 2002 law increased the required number of affordable units.

The developer of a South of Market project was allowed by The City to exceed height and destiny restrictions, in exchange for building an off-site apartment complex and handing it over to the Tenderloin Housing Clinic.

The practice of building off-site has also spurred debate over whether The City benefits more from mixed-income projects downtown, or from a larger number of units at cheaper sites throughout town. Randy Shaw, of the Tenderloin Housing Clinic, argued that low-income people are best served by housing in the area they live.

“I’d think families would rather live in the Mission than live downtown,” Shaw said.

Off-site housing “is an opportunity and encouragement for for-profit developers who don’t want to get into the [affordable housing] business to partner with nonprofits that are desperately looking for funds to build affordable units,” said White.

Developers also have a third option to meet affordable housing requirements: paying a fee instead of providing units.

In October, The Planning Commission on a split vote allowed the developer of a nearly complete project in the Haight-Ashbury to pay an $884,476 housing fee after originally promising several affordable units. Officials have criticized that decision as a painful delay of needed family housing, and the Mayor’s Office of Housing Director said his office has asked the commission not to accept those in-lieu payments for projects that have already begun construction.

The inclusionary housing law was pitched as an antidote for case-by-case negotiations that make it more difficult for developers to plan the cost of new projects. But since its implementation, deals on three giant projects have undercut that goal and countered arguments that developers can’t afford to build even more below-market units.

Supervisor Chris Daly, who represents the Tenderloin and South of Market and was re-elected in 2002 on a platform of “housing, housing, housing,” most recently led the fight to convince landlord Angelo Sangiacomo to plan approximately 500 below-market units–more than a third of his total project–in a new apartment complex planned for Eighth and Market streets. Daly had led the fight against demolition of a smaller rent-controlled apartment building at the site.

Early last year, Daly agreed with developers of two Rincon Hill sites to lead the fight for an unusually high number of market-rate condos in exchange for approximately 400 units of affordable homes to be built offsite. The deal–which some in the housing community argue put too much burden on the developers and may choke further development–calls more than 100 below-market condos, many of which are planned for the Showplace Square neighborhood.

In the first large-scale deal to break from the 2002 law, Daly in early 2003 won a fight to allow a South of Market developer to scrap plans for a live/work loft project at Fourth and Freelon streets and increase the total numbers of condo units. In exchange, the developer agreed to build 56 rental apartments on Brannan Street and turn them over to a nonprofit group that will market them to people earning less than half of median income

The promises and pitfalls of San Francisco’s inclusionary housing law aren’t always easy to measure. That’s due in part because the three agencies that monitor the law— the Planning Department, Department of Building Inspection, and Mayor’s Office of Housing — have no interagency tracking system for the new and proposed units. Matt Franklin, the new director of the Office of Housing, told The Examiner he expects to put such a system in place within two months. “I do think that the departments can do a better job of marshaling the information they do have,” he said.

The inclusionary housing program through the Mayor’s Office is poised to provide hundreds of new homes for San Franciscans. Developers must market affordable units in newspapers for at least two weeks and generally hold a lottery to pick eligible tenants or buyers.