Months after a law went into effect requiring residential hotels to install sprinkler systems, less than a quarter have been brought up to code and a vast majority of the projects remain bogged down by city bureaucracy. 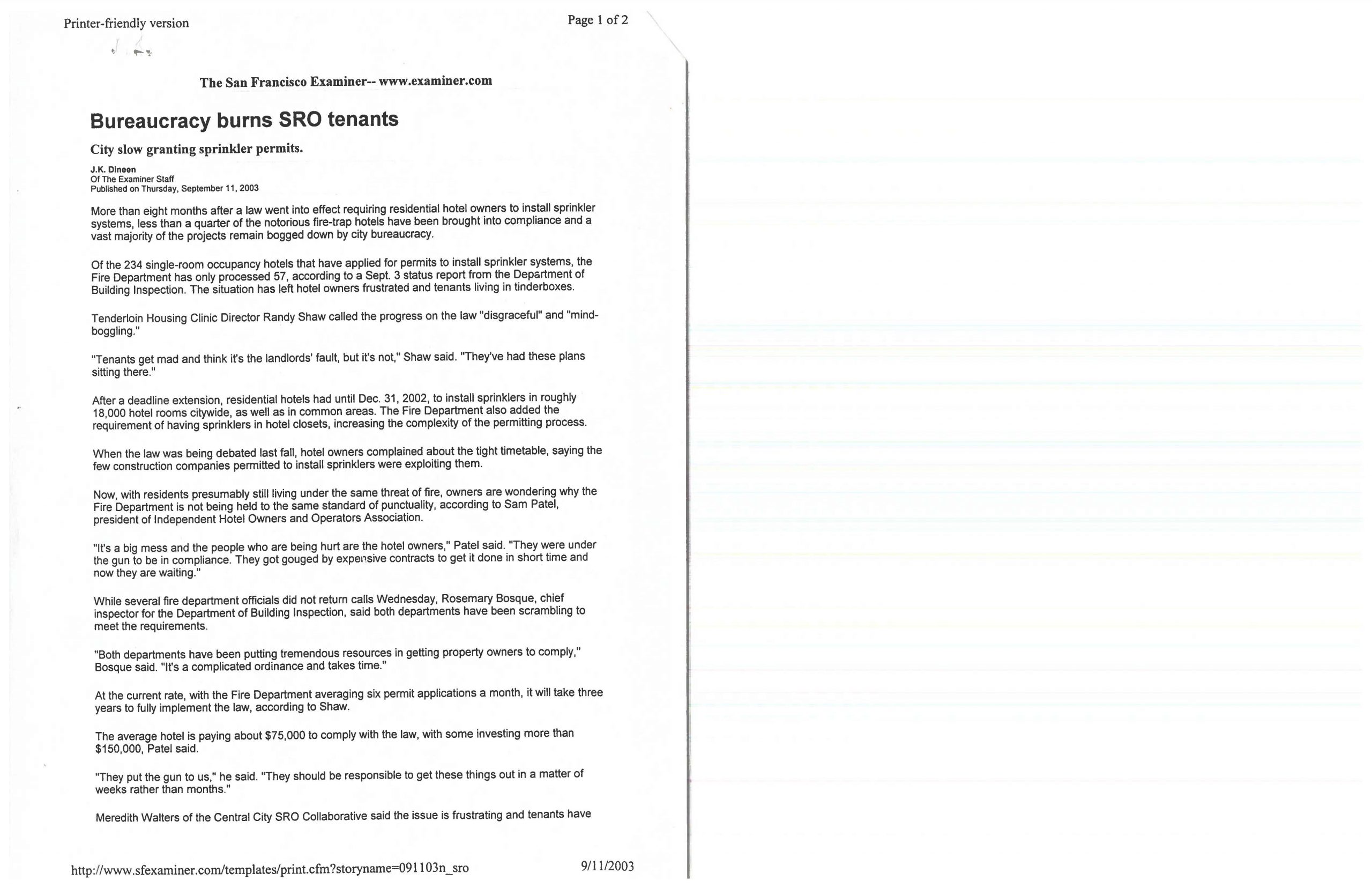 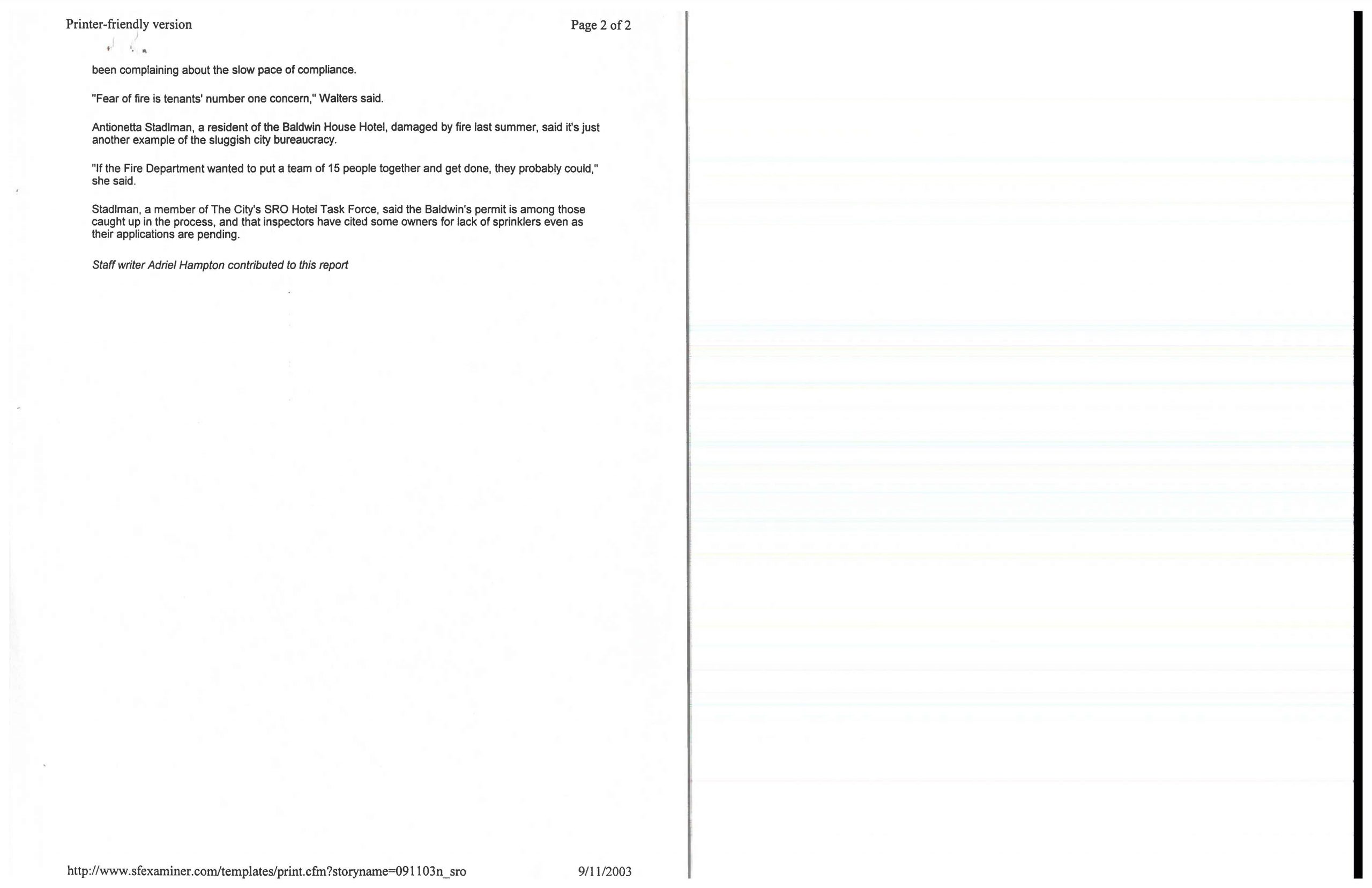 More than eight months after a law went into effect requiring residential hotel owners to install sprinkler systems, less than a quarter of the notorious fire-trap hotels have been brought into compliance and a vast majority of the projects remain bogged down by city bureaucracy.

Of the 234 single-room occupancy hotels that have applied for permits to install sprinkler systems, the Fire Department has only processed 57, according to a Sept. 3 status report from the Department of Building Inspection. The situation has left hotel owners frustrated and tenants living in tinderboxes.

“Tenants get mad and think it’s the landlords’ fault, but it’s not,” Shaw said. “They’ve had these plans sitting there.”

After a deadline extension, residential hotels had until Dec. 31, 2002, to install sprinklers in roughly 18,000 hotel rooms citywide, as well as in common areas. The Fire Department also added the requirement of having sprinklers in hotel closets, increasing the complexity of the permitting process.

When the law was being debated last fall, hotel owners complained about the tight timetable, saying the few construction companies permitted to install sprinklers were exploiting them.

Now, with residents presumably still living under the same threat of fire, owners are wondering why the Fire Department is not being held to the same standard of punctuality, according to Sam Patel, president of Independent Hotel Owners and Operators Association.

“It’s a big mess and the people who are being hurt are the hotel owners,” Patel said. “They were under the gun to be in compliance. They got gouged by expensive contracts to get it done in a short time and now they are waiting.”

While several fire department officials did not return calls Wednesday, Rosemary Bosque, chief inspector for the Department of Building Inspection, said both departments have been scrambling to meet the requirements.

“Both departments have been putting tremendous resources in getting property owners to comply,” Bosque said. “It’s a complicated ordinance and takes time.”

At the current rate, with the Fire Department averaging six permit applications a month, it will take three years to fully implement the law, according to Shaw.

“They put the gun to us,” he said. “They should be responsible to get these things out in a matter of weeks rather than months.”

Meredith Walters of the Central City SRO Collaborative said the issue is frustrating and tenants have been complaining about the slow pace of compliance.

“Fear of fire is tenants’ number one concern,” Walters said.

“If the Fire Department wanted to put a team of 15 people together and get done, they probably could,” she said.

Stadlman, a member of The City’s SRO Hotel Task Force, said the Baldwin’s permit is among those caught up in the process, and that inspectors have cited some owners for lack of sprinklers even as their applications are pending.