In 1992, San Francisco voters passed Proposition H which adjusted the maximum annual rent increase for rent-controlled apartments to 60% of the Consumer Price Index for the Bay Area. 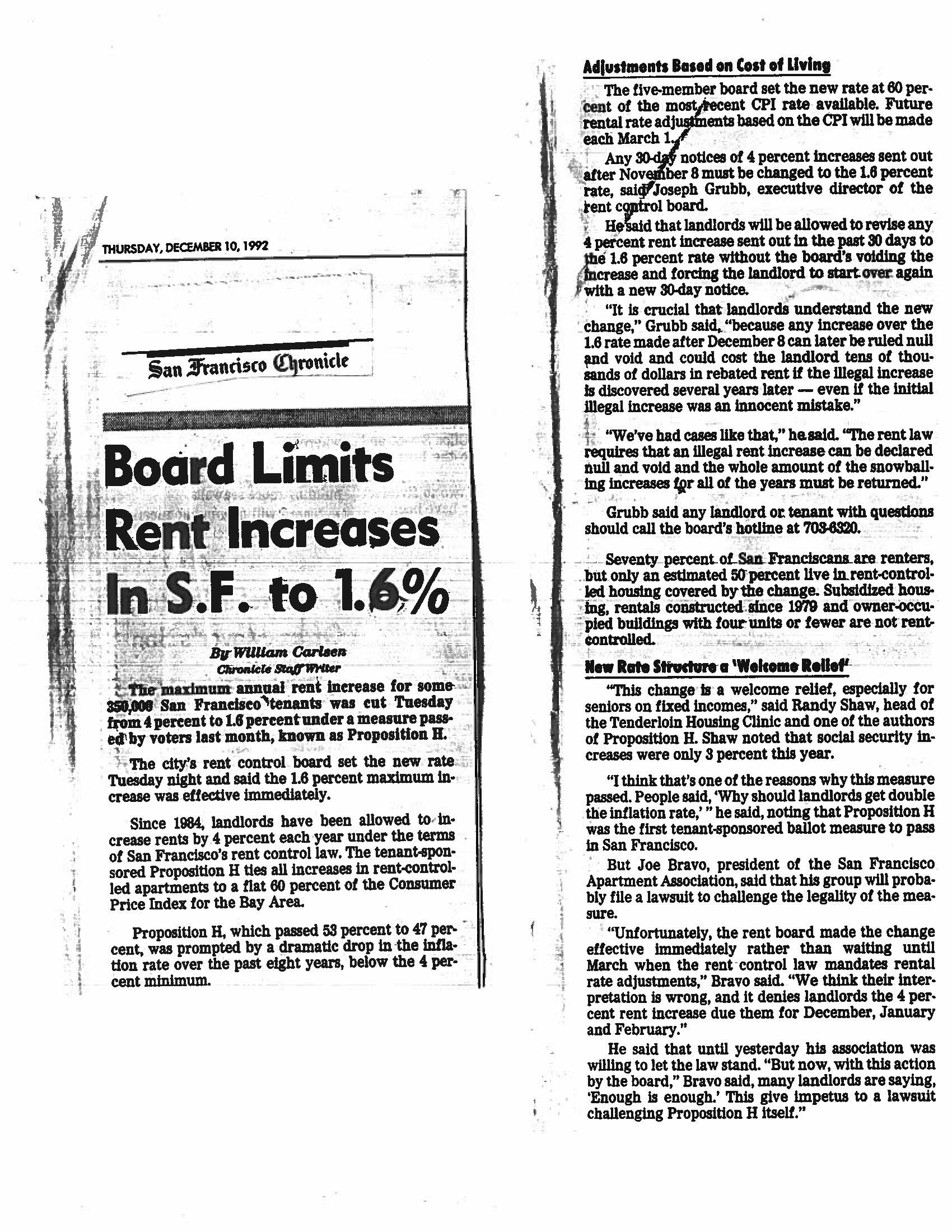 The maximum annual rent increase for some 350,000 San Francisco tenants was cut Tuesday from 4 percent to 1.6 percent under a measure passed by voters last month, known as Proposition H.

The city’s rent control board set the new rate Tuesday night and said the 1.6 percent maximum increase was effective immediately.

Since 1984, landlords have been allowed to increase rents by 4 percent each year under the terms of San Francisco’s rent control law. The tenant-sponsored Proposition H ties all increases in rent-controlled apartments to a flat 60 percent of the Consumer Price Index for the Bay Area.

Proposition H, which passed 53 percent to 47 percent, was prompted by a dramatic drop in the inflation rate over the past eight years, below the 4 percent minimum.

Adjustments Based on Cost of Living

The five member board set the new rate at 60 percent of the most recent CPI rate available. Future rental rate adjustments based on the CPI will be made each March 1.

Any 30-day notices of 4 percent increases sent out after November 8 must be changed to the 1.6 percent rate, said Joseph Grubb, executive director of the rent control board

He said that landlords will be allowed to revise any 4 percent rent increase sent out in the past 30 days to the 1.6 percent rate without the board’s voiding the increase and forcing the landlord to start over again with a new 30-day notice.

“It is crucial that landlords understand the new change,” Grubb said, “because any increase over the 1.6 rate made after December 8 can later be ruled null and void and could cost the landlord tens of thousands of dollars in rebated rent if the illegal increase is discovered several years later – even if the initial illegal increase was an innocent mistake.”

“We’ve had cases like that,” he said. “The rent law requires that an illegal rent increase can be declared null and void and the whole amount of the snowballing increases for all of the years must be returned.”

Grubb said any landlord or tenant with questions should call the board’s hotline at 703-6820.

Seventy percent of San Franciscans are renters, but only an estimated 50 percent live in rent-controlled housing covered by the change. Subsidized housing, rentals constructed since 1979 and owner-occupied buildings with four units or fewer are not rent controlled.

“This change is a welcome relief, especially for seniors on fixed incomes,” said Randy Shaw, head of the Tenderloin Housing Clinic and one of the authors of Proposition H. Shaw noted that social security increases were only 3 percent this year.

“I think that’s one of the reasons why this measure passed. People said, “Why should landlords get double the inflation rate,'” he said, noting that Proposition H was the first tenant-sponsored ballot measure to pass in San Francisco.

But Joe Bravo, president of the San Francisco Apartment Association, said that his group will probably file a lawsuit to challenge the legality of the measure.

“Unfortunately, the rent board made the change effective immediately rather than waiting until March when the rent control law mandates rental rate adjustments,” Bravo said. “We think their interpretation is wrong, and it denies landlords the 4 percent rent increase due them for December, January and February.”

He said that until yesterday his association was willing to let the law stand. “But now, with this action by the board,” Bravo said, many landlords are saying, ‘Enough is enough.’ This give impetus to a lawsuit challenging Proposition H itself.”