The progress made and work needed at some of San Francisco’s residential hotels is outlined. 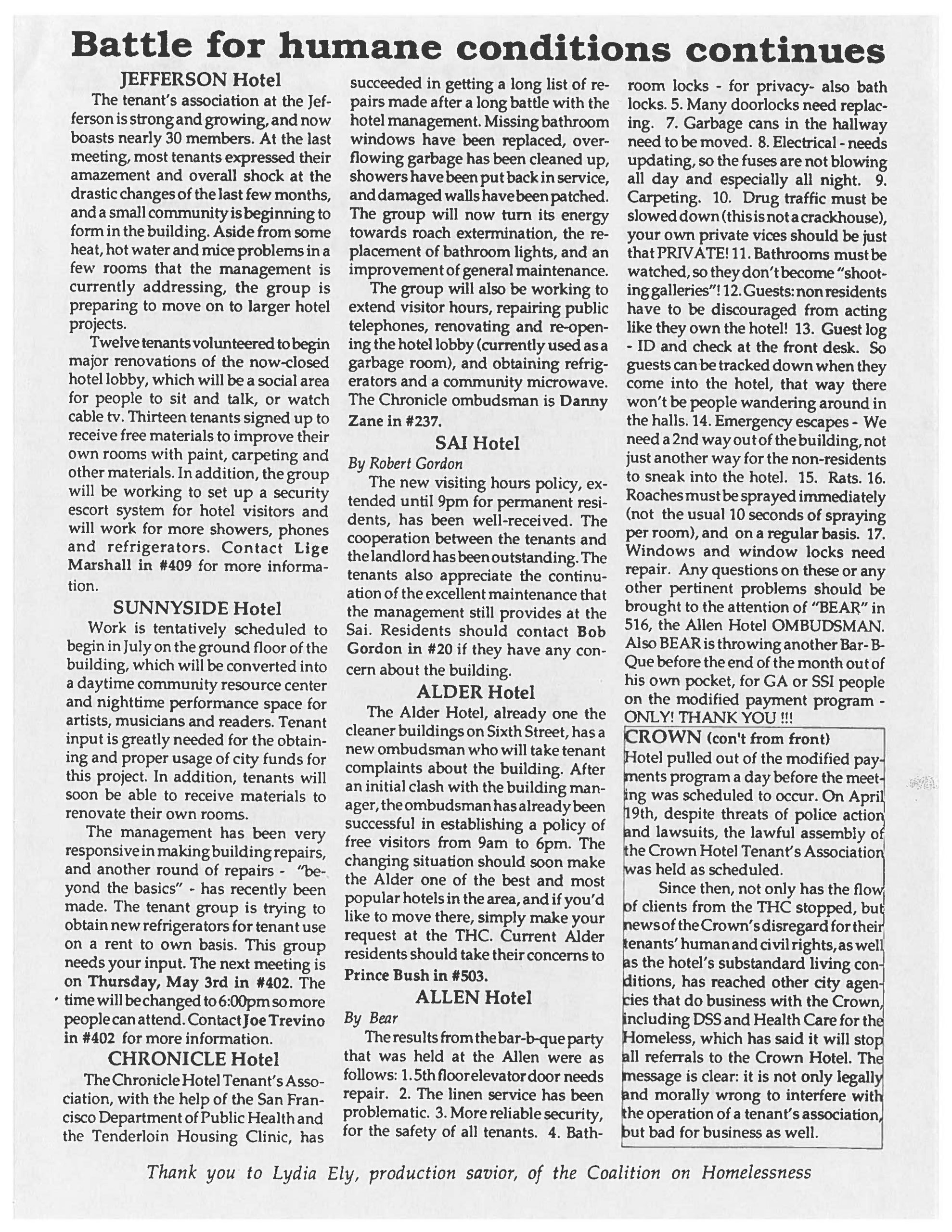 The tenant’s association at the Jefferson is strong and growing, and now boasts nearly 30 members. At the last meeting, most tenants expressed their amazement and overall shock at the drastic changes of the last few months, and a  small community is beginning to form in the building. Aside from some heat, hot water and mice problems in a few rooms that the management is currently addressing, the group is preparing to move on to larger hotel projects.

Twelve tenants volunteered to begin major renovations of the now-closed hotel lobby, which will be a social area for people to sit and talk, or watch cable tv. Thirteen tenants signed up to receive free materials to improve their own rooms with paint, carpeting and other materials. In addition, the group will be working to set up a security escort system for hotel visitors and will work for more showers, phones and refrigerators. Contact Lige Marshall in  #409 for more information.

Work is tentatively scheduled to begin in July on the ground floor of the building, which will be converted into a daytime community resource center and nighttime performance space for artists, musicians and readers. Tenant input is greatly needed for the obtaining and proper usage of city funds for this project. In addition, tenants will soon be able to receive their own rooms.

The management has been very responsive in making building repairs, and another round of repairs — “beyond the basics” — has recently been made. The tenant group is trying to obtain new refrigerators for tenants use on a rent to own basis. This group needs your input. The next meeting is on Thursday, May 3rd in #402. The time will be changed to 6:00 pm so more people can attend. Contact Joe Trevino in  #402 for more information.

The Chronicle Hotel Tenants Association, with the help of the San Francisco Department of Public Health and the Tenderloin Housing Clinic, has succeeded in getting a long list of repairs made after a long battle with the hotel management. Missing bathroom windows have been replaced, overflowing garbage has been cleaned up, showers have been put back in service, and damaged walls have been patched. The group will now turn its energy towards roach extermination, the replacement of bathroom lights, and an improvement of general maintenance.

The group will also be working to extend visitor hours, repairing public telephones, renovating and re-opening the hotel lobby (currently used as a garbage room), and obtaining refrigerators and a community microwave. The Chronicle ombudsman is Danny Zane in #237.

The new visiting hours policy, extended until 9pm for permanent residents, has been well-received. The cooperation between the tenants and the landlord has been outstanding. The tenants also appreciate the continuation of the excellent maintenance that the management still provides at the Sai. Residents should contact Bob Gordon in #20 if they have any concern about the building.

The Alder Hotel, already one of the cleaner buildings on Sixth Street, has a new ombudsman who will take tenant complaints about the building. After an initial clash with the building manager, the ombudsman has already been successful in establishing a policy of free visitors from 9am to 6pm. The changing situation should soon make the Alder one of the best and most popular hotels in the area, and if you’d like to move there, simply make your request at the THC. Current Alder residents should take their concerns to Prince Bush in #503.

The results from the bar-b-que party that was held at the Allen were as follows: 1. 5th floor elevator door needs repair. 2. The linen service has been problematic. 3. More reliable security, for the safety of all tenants. 4. Bathroom locks – for privacy – also bath locks. 5. Many door locks need replacing. 7. Garbage cans in the hallway need to be moved. 8. Electrical – needs updating, so the fuses are not blowing all day and especially all night. 9. Carpeting. 10. Drug traffic must be slowed down (this is not a crackhouse), your own private vices should be just that PRIVATE! 11. Bathrooms must be watched, so they don’t become “shooting galleries”! 12. Guest log ID and check at the front desk. So guests can be tracked down when they come into the hotel, that way there won’t be people wandering around in the halls. 14. Emergency escapes – We need a 2nd way out of the building, not just another way for the non-resident to sneak into the hotel. 15. Rats. 16. Roaches must be sprayed immediately (not the usual 10 seconds of spraying per room), and on a regular basis. 17. Windows and window locks need repair. Any questions on these or any other pertinent problems should be brought to the attention of “BEAR” in 516, the Allen Hotel OMBUDSMAN. Also BEAR is throwing another Bar-B-Que before the end of the month out of his own pocket, for GA or SSI people on the modified payment program – ONLY! THANK YOU!!!

Hotel pulled out of the modified payments program a day before the meeting was scheduled to occur. On April 19th, despite threats of police action and lawsuits, the lawful assembly of the Crown Hotel Tenants Association was held as scheduled.

Since then, not only has the flow of clients from the THC stopped, but news of the Crown’s disregard for their tenants’ human and civil rights, as well as the hotel’s substandard living conditions, has reached other city agencies that do business with the Crown, including DSS and Health Care for the Homeless, which has said it will stop all referrals to the Crown Hotel. The message is clear: it is not only legally and morally wrong to interfere with the operations of a tenant’s association, but bad for business as well.