A battle over building code violations breaks out between a local resident and the influential leader of the Residential Builders Association, with the resident claiming San Francisco selectively enforces building code. 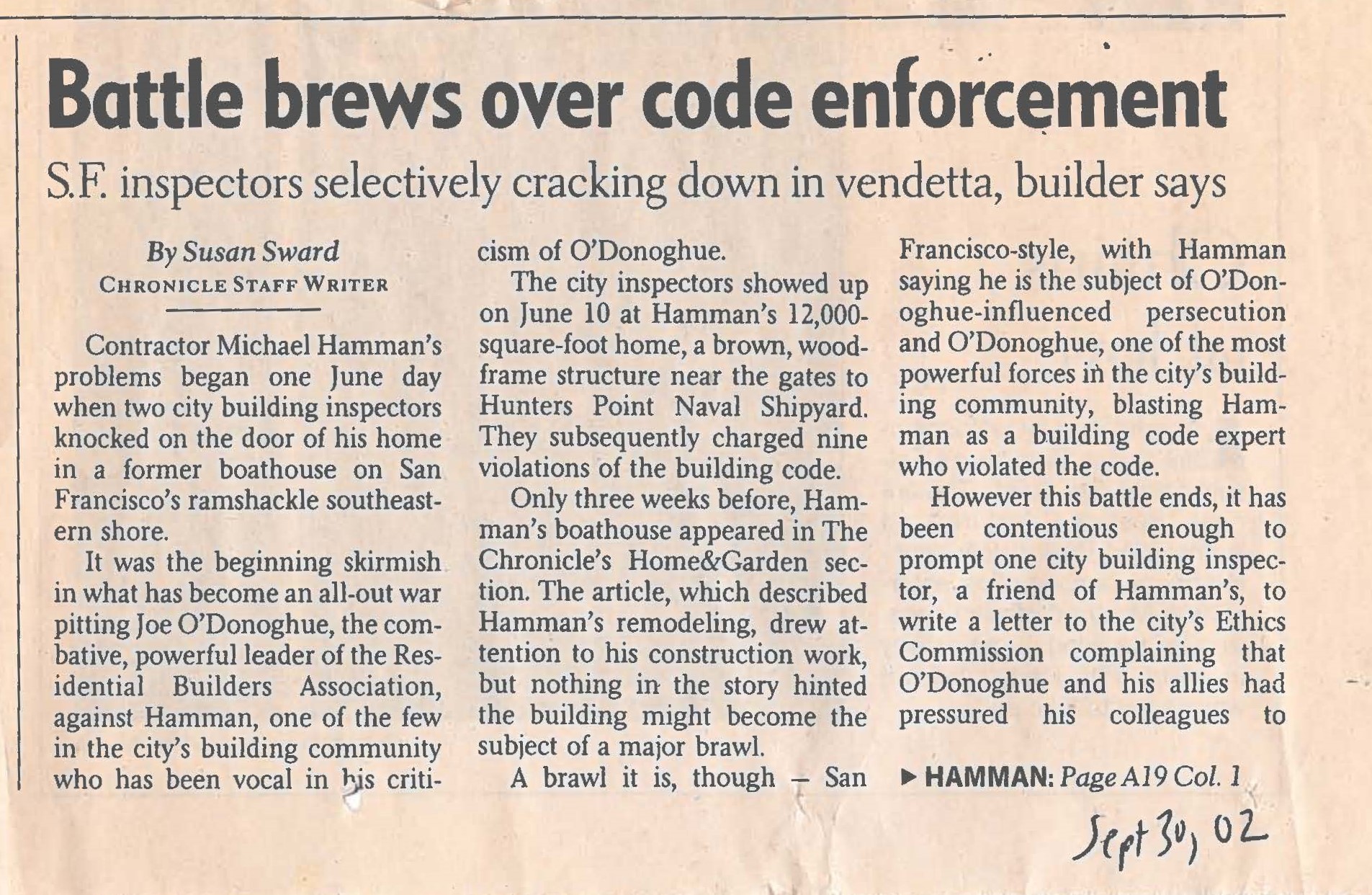 Contractor Michael Hamman’s problems began one June day when two city building inspectors knocked on the door of his home in a former boathouse on San Francisco’s ramshackle southeastern shore.

It was the beginning skirmish in what has become an all-out war pitting Joe O’Donoghue, the combative, powerful leader of the Residential Builders Association, against Hamman, one of the few in the city’s building community who has been vocal in his criticism of O’Donoghue.

The city inspectors showed up on June 10 at Hamman’s 12,000-square-foot home, a brown, wood-frame structure near the gates to Hunters Point Naval Shipyard. They subsequently charged nine violations of the building code.

Only three weeks before, Hamman’s boathouse appeared in The Chronicle’s Home & Garden section. The article, which described Hamman’s remodeling, drew attention to his construction work, but nothing in the story hinted the building might become the subject of a major brawl.

A brawl it is, though — San Francisco-style, with Hamman saying he is the subject of O’Donoghue-influenced persecution and O’Donoghue, one of the most powerful forces in the city’s building community, blasting Hamman as a building code expert who violated the code.

However this battle ends, it has been contentious enough to prompt one city building inspector, a friend of Hamman’s, to write a letter to the city’s Ethics Commission complaining that O’Donoghue and his allies had pressured his colleagues to pounce on Hamman in an unreasonably harsh fashion.

Top Building Inspection Department officials say Hamman, a building code expert, is trying to distract attention from his own serious code violations by claiming that O’Donoghue — a self-made millionaire who holds enormous sway in their department — is after him.

“His place is a fire trap,” says Building Inspection Deputy Director Jim Hutchinson, who is a close ally of O’Donoghue. Hutchinson insists that Hamman’s case is being handled no differently from any other and says Hamman’s failure to build a required exterior staircase from his third floor puts anyone on the 67-year-old building at risk of dying in a fire.

Hamman says the inspectors who came to his home on a road off Innes Avenue had a copy of the newspaper story and said they had received a complaint.

Hamman says Ron Tom, a senior inspector at the Building Inspection Department, told him they had been “sent by Joe to get me.” Ron Tom declines to comment, but Hutchinson says the inspector denied saying that.

Hamman says he later learned it was contractor Joe Cassidy, the Residential Builders Association treasurer who owns property near Hamman, who filed the complaint.

Though Hamman acknowledges he violated the building code in some cases — including his failure to build a new stairway to his boathouse’s third floor before his permit to do so lapsed — he argues that his code violations just provided an excuse for the department to go after him.

“I think this is an act of revenge, and I think O’Donoghue is using his control over the building department to settle personal scores,” says Hamman, past president of both the Bay Area chapter of the National Association of the Remodeling Industry and the Building Department’s Code Advisory Committee.

The Building Inspection Department pursuing the case against Hamman was restructured in 1994 by a ballot measure O’Donoghue co-sponsored. O’Donoghue billed the measure as one aimed at improving service to the public while Hamman — who chaired the committee against the measure — and other critics argued it gave too much power to the builders.

In the wrangle over Hamman’s property, O’Donoghue says he reviewed Hamman’s files after making a Public Record Act request to get them. “Only when Hamman started throwing my name around, I got involved about six weeks ago. This is not a vendetta,” O’Donoghue says. “This is by far the worst case of total flagrant violations that I have seen in construction in over 40 years.”

As Hamman and the city now quarrel over whether a new permit will say Hamman’s building has a legal dwelling unit in it, city officials are telling him to move out until safety problems are remedied. Hamman, who has taught building code courses, says he will appeal any effort to make him move.

It’s not just the question of the dwelling unit. The newspaper article reported that on the two levels below Hamman’s third-floor residence, there are working cabinetry, clothing design, and metal-working shops. Hutchinson says those units are illegal. Hamman says they are not.

Meanwhile, the city’s Ethics Commission received a letter from Laurence Kornfield, a chief city building inspector who wrote the commission’s whistle-blower unit sharply criticizing the city’s actions against Hamman and the RBA’s alleged role in the case.

Two years ago, Kornfield, who declined to be interviewed in any detail, visited Hamman’s home and confirmed that inside the dwelling was a pre-existing residence built long ago like a ship’s interior for the original owner — with a galley, bulkhead doorways, and a curved ceiling.

Kornfield says in the letter to the Ethics Commission that he had “never seen such an obvious, concerted application of outside pressure to exact political and personal retaliation and retribution, nor have I seen employees so accommodating.”

He adds Hamman is “being forced by department employees, under severe pressure from members of the Residential Building Association, to comply with unusual conditions … which are much more restrictive and punitive than those applied to other permit holders.”

Deputy Director Hutchinson says the city is investigating Kornfield’s role in the case. Both Hamman and Kornfield say they are friends but deny that has affected the case.

O’Donoghue branded Kornfield’s letter “an absolute fictionalizing and fantasizing of reality.” Meanwhile, department director Frank Chiu says he is treating Hamman’s case like any other.

O’Donoghue says he has talked to Chiu twice about Hamman’s case, but he denies ever “interfering with anyone” in the building department. O’Donoghue says Hamman “is one of our detractors and we don’t like the guy, but he created this mess himself.”

Hamman says he is now trying to get a permit to correct his violations, but the city insists he “first admit that there was no legal dwelling unit in this building before granting any application by me, and I’m not going to do it.”

Hamman believes he and O’Donoghue fight each other because of sharply differing views about construction in the city. “I am part of the remodeling industry in this city, and that industry is into preserving, renovating, and reusing older buildings,” Hamman said. “Joe’s business is tearing down buildings and building new ones,” and the hundreds of live-work units built by many of his members “are a pox on the face of our city.”

O’Donoghue says Hamman and others are “trying to go with this Attila the Hun image which has been popped down on me, but in the community I get standing ovations … Even if they weren’t attacking me, we would take an absolute stand on this case. We won’t allow this department to be defamed anymore. After all, we created that department.”