The opening of live work spaces for artists give hope to the community that the block may be at a turning point. 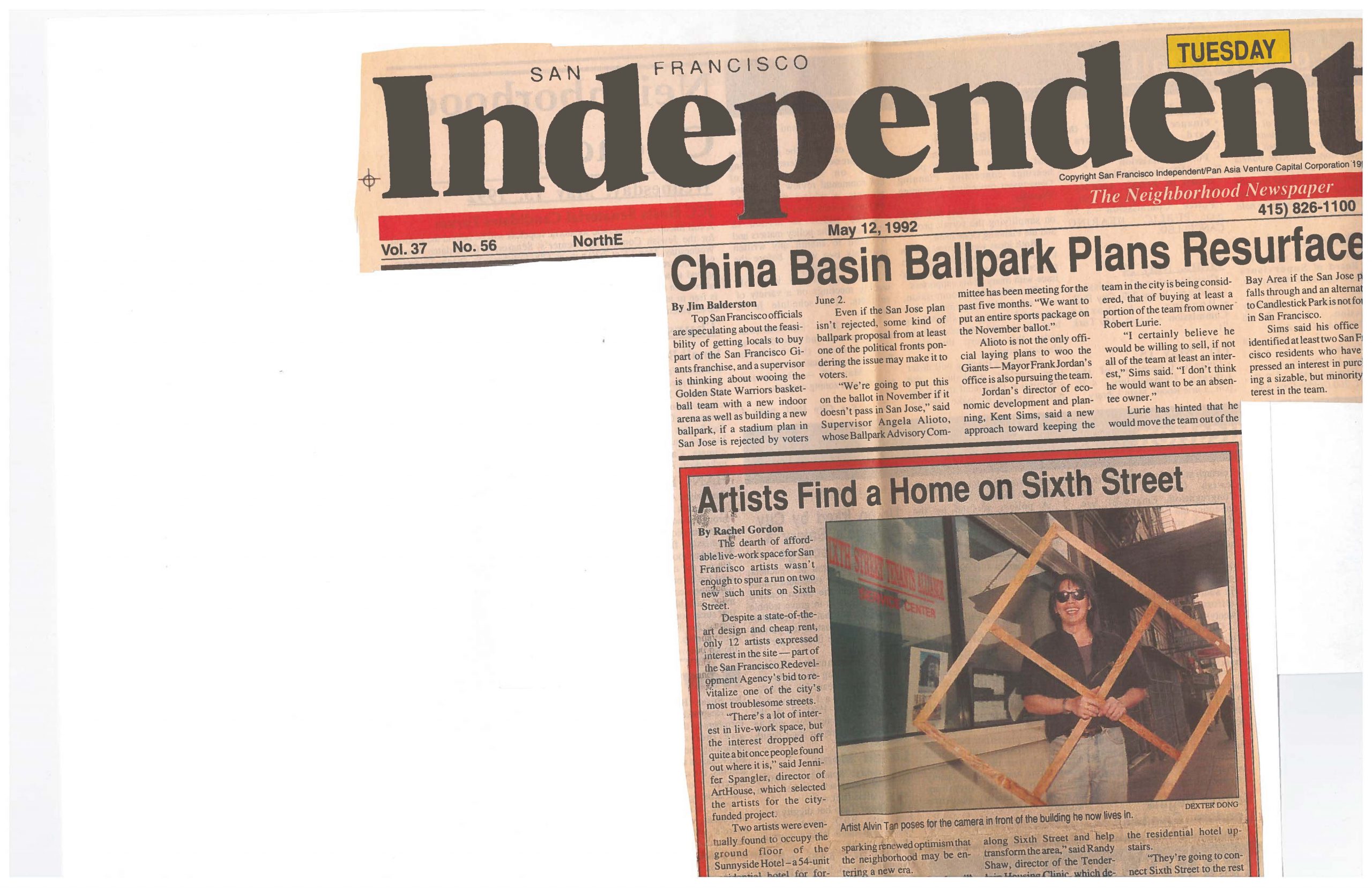 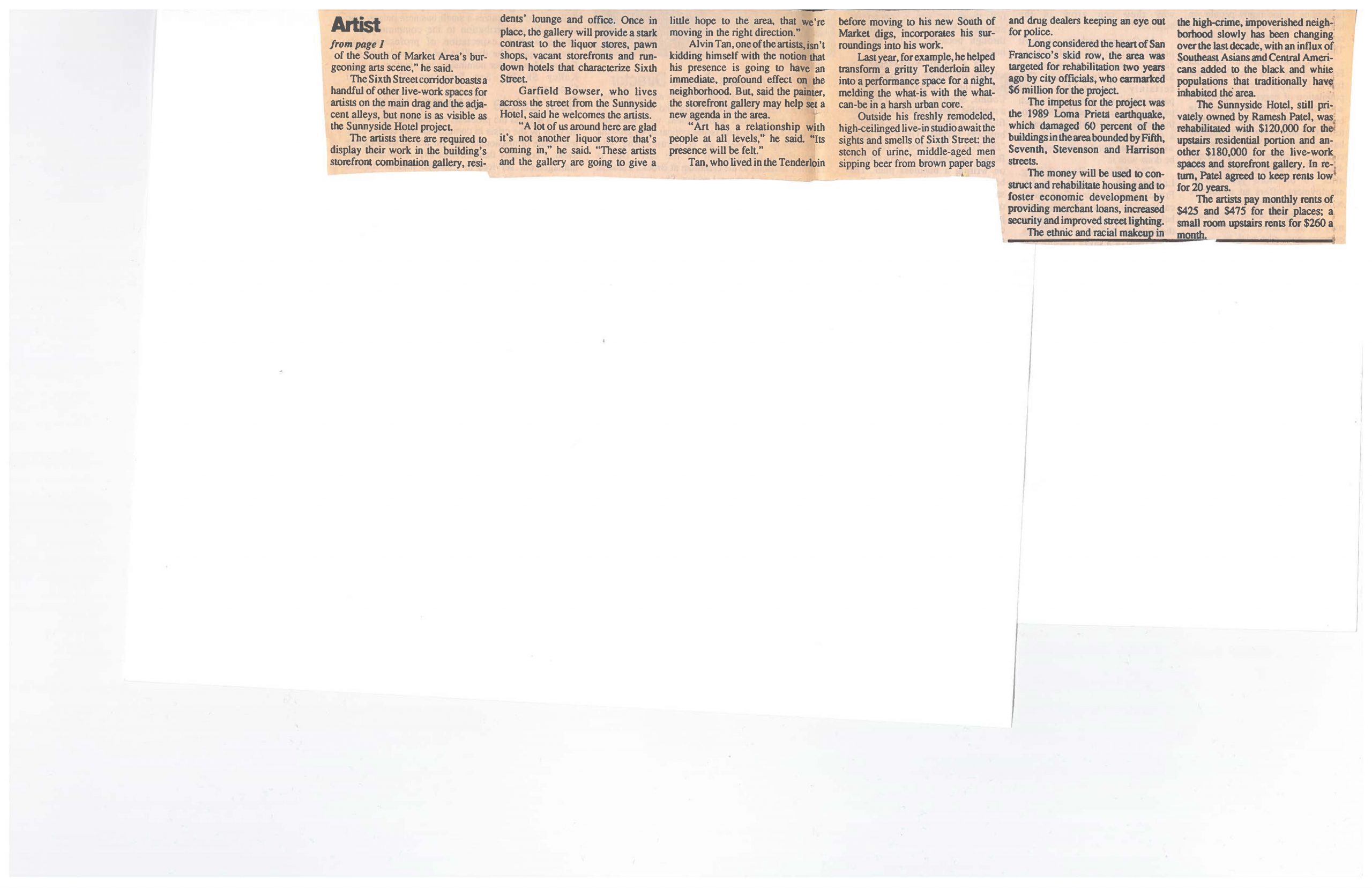 The dearth of affordable live-work space for San Francisco artists wasn’t enough to spur a run on two new such units on Sixth Street.

Despite a state-of-the-art design and cheap rent, only 12 artists expressed interest in the site-part of the San Francisco Redevelopment Agency’s bid to revitalize one of the city’s most troublesome streets.

“There’s a lot of interest in live-work space, but the interest dropped off quite a bit once people found out where it is,” said Jennifer Spangler, director of ArtHouse, which selected the artists for the city-funded project.

Two artists were eventually found to occupy the ground floor of the Sunnyside Hotel-a54-unit residential hotel for formerly homeless people at Sixth and Minna streets — sparking renewed optimism that the neighborhood may be entering a new era.

“These live-work units will be the anchor for other arts uses along Sixth Street and help transform the area,” said Randy Shaw, director of the Tenderloin Housing Clinic, which developed the artists’ units and the residential hotel upstairs.

“They’re going to connect Sixth Street to the rest of the South of Market Area’s burgeoning arts scene,” he said.

The Sixth Street corridor boasts a handful of other live-work spaces for artists on the main drag and the adjacent alleys, but none is as visible as the Sunnyside Hotel project.

The artists there are required to display their work in the building’s storefront combination gallery, residents’ lounge and office. Once in place, the gallery will provide a stark contrast to the liquor stores, pawn shops, vacant storefronts and run- down hotels that characterize Sixth Street.

Garfield Bowser, who lives across the street from the Sunnyside Hotel, said he welcomes the artists.

“A lot of us around here are glad it’s not another liquor store that’s coming in,” he said. “These artists and the gallery are going to give a little hope to the area, that we’re moving in the right direction.”

Alvin Tan, one of the artists, isn’t kidding himself with the notion that his presence is going to have an immediate, profound effect on the neighborhood. But, said the painter, the storefront gallery may help set a new agenda in the area.

“Art has a relationship with people at all levels,” he said. “It’s presence will be felt.”

Tan, who lived in the Tenderloin before moving to his new South of Market digs, incorporates his surroundings into his work.

Last year for example, he helped transform a gritty Tenderloin alley into a performance space for a night, melding the what-is with the what- can-be in a harsh urban core.

Outside his freshly remodeled, high-ceilinged live-in studio await the sights and smells of Sixth Street: the stench of urine, middle-aged men sipping beer from brown paper bags and drug dealers keeping an eye out for police.

Long considered the heart of San Francisco’s skid row, the area was targeted for rehabilitation two years ago by city officials, who earmarked $6 million for the project.

The impetus for the project was the 1989 Loma Prieta earthquake, which damaged 60 percent of the buildings in the area bounded by Fifth, Seventh, Stevenson and Harrison streets.

The money will be used to construct and rehabilitate housing and to foster economic development by providing merchant loans, increased security and improved street lighting.

The ethnic and racial makeup in the high-crime, impoverished neighborhood slowly has been changing over the last decade, with an influx of Southeast Asians and Central Americans added to the black and white populations that traditionally have inhabited the area.

The Sunnyside Hotel, privately owned by Ramesh Patel, was rehabilitated with $120,000 for the upstairs residential portion and another $180,000 for the live-work spaces and storefront gallery. In return, Patel agreed to keep rents low for 20 years.