The Tenderloin Housing Clinic continues the fight for code enforcement, by bringing to light shortcomings of the Bureau of Building Inspection and advocating for reform. 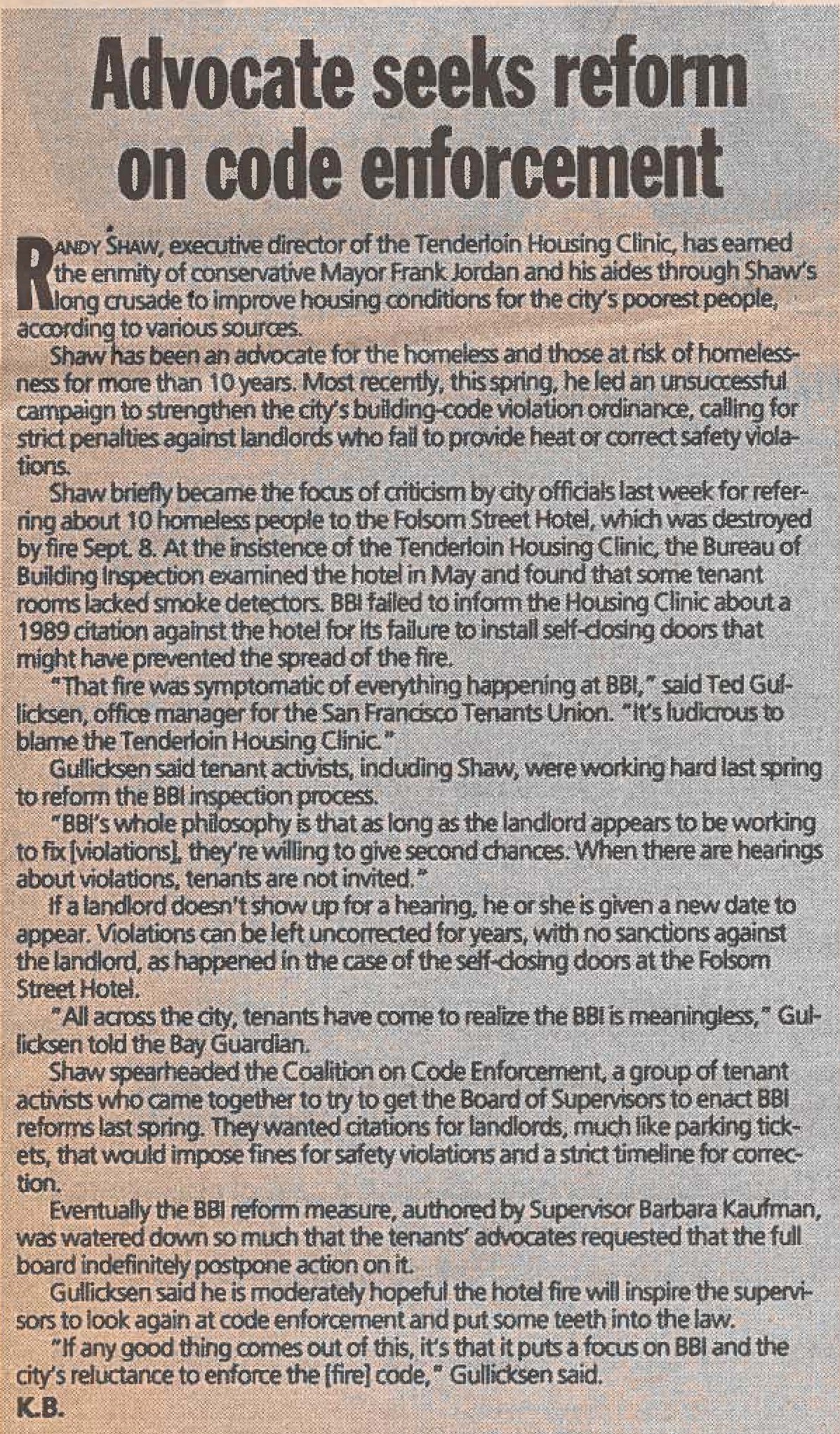 Randy Shaw, executive director of the Tenderloin Housing Clinic, has earned the enmity of conservative Mayor Frank Jordan and his aides through Shaw’s long crusade to improve housing conditions for the city’s poorest people, according to various sources.

Shaw has been an advocate for the homeless and those at risk of homelessness for more than 10 years. Most recently, this spring, he led an unsuccessful campaign to strengthen the city’s building-code violation ordinance, calling for strict penalties against landlords who fail to provide heat or correct safety violations.

Shaw briefly became the focus of criticism by city officials last week for referring about 10 homeless people to the Folsom Street Hotel, which was destroyed by fire Sept. 8. At the insistence of the Tenderloin Housing Clinic, the Bureau of Building Inspection examined the hotel in May and found that some tenant rooms lacked smoke detectors. BBI failed to inform the Housing Clinic about a 1989 citation against the hotel for its failure to install self-closing doors that might have prevented the spread of the fire.

“That fire was symptomatic of everything happening at BBI.” said Ted Gullidsen, office manager for the San Francisco Tenants Union. “It’s ludicrous to blame the Tenderloin Housing Clinic.”

“BBI’s whole philosophy is that as long as the landlord appears to be working to fix [violations], they’re willing to give second chances. When there are hearings about violations, tenants are not invited.”

If a landlord doesn’t show up for a hearing, he or she is given a new date to appear. Violations can be left uncorrected for years, with no sanctions against the landlord, as happened in the case of the self-closing doors at the Folsom Street Hotel.

“All across the city, tenants have come to realize the BBI is meaningless,” Gullicksen told the Bay Guardian.

Shaw spearheaded the Coalition on Code Enforcement, a group of tenant activists who came together to try to get the Board of Supervisors to enact BBI reforms last spring. They wanted citations for landlords, much like parking tickets, that would impose fines for safety violations and a strict timeline for correction.

Eventually the BBI reform measure, authored by Supervisor Barbara Kaufman, was watered down so much that the tenants’ advocates requested that the full board indefinitely postpone action on it.

Gullicksen said he is moderately hopeful the hotel fire will inspire the supervisors to look again at code enforcement and put some teeth into the law.

“If any good thing comes out of this, it’s that it puts a focus on BBI and the city’s reluctance to enforce the (fire) code,” Gullicksen said.