THC represents tenants of the Folsom Street Hotel, a residential building, alleging they were improperly denied a return to their home following a fire at the building. The City’s Zoning Chief is pressured to investigate the illegal conversion of the hotel into a youth hostel rebranded as the Soma Inn. 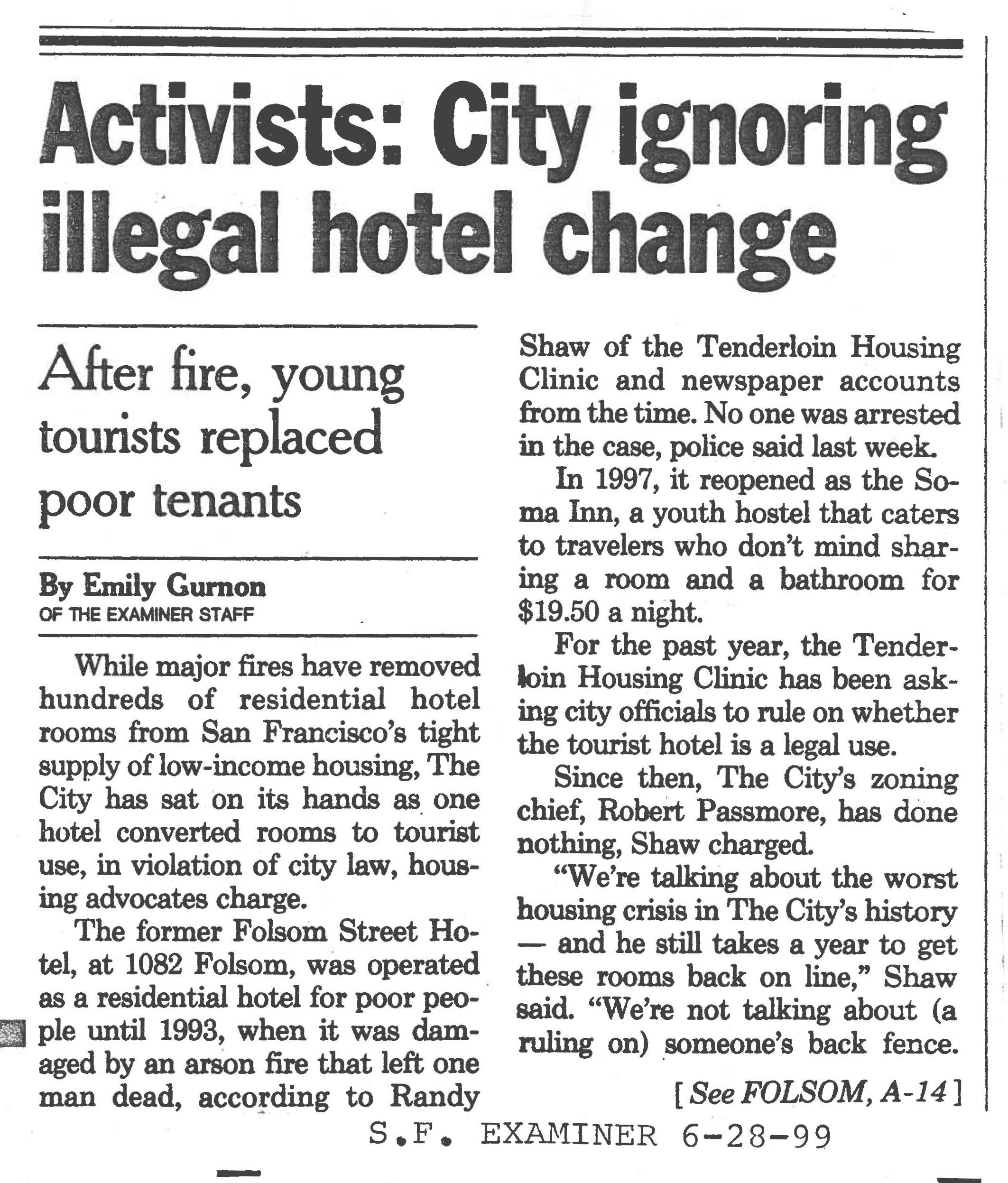 By Emily Gurnon
Of The Examiner Staff

While major fires have removed hundreds of residential hotel rooms from San Francisco’s tight supply of low-income housing, The City has sat on its hands as one hotel converted rooms to tourist use, in violation of city law, housing advocates charge.

The former Folsom Street Hotel, at 1082 Folsom, was operated as a residential hotel for poor people until 1993, when it was damaged by an arson fire that left one man dead, according to Randy Shaw of the Tenderloin Housing Clinic and newspaper accounts from the time. No one was arrested in the case, police said last week.

In 1997, it reopened as the Soma Inn, a youth hostel that caters to travelers who don’t mind sharing a room and a bathroom for $19.50 a night. For the past year, the Tenderloin Housing Clinic has been asking city officials to rule on whether the tourist hotel is a legal use.

Since then, The City’s zoning chief, Robert Passmore, has done nothing, Shaw charged.

“We’re talking about the worst housing crisis in The City’s history—and he still takes a year to get these rooms back on line,” Shaw said. “We’re not talking about (a ruling on) someone’s back fence. What could be a bigger priority than this?”

Passmore has said repeatedly in the last several months that he intends to get to the Soma Inn issue. “I haven’t given it a high enough priority,” Passmore said last week. “I don’t have a good answer for that question. There was a period I just didn’t get to it.” He said he hopes to make his decision by the time he retires. His last day on the job is Wednesday.

A city law known as the Residential Hotel Conversion Ordinance, passed in 1979, made it illegal for hotel owners to turn a residential hotel into tourist lodgings without permission from The City. The intent was to preserve affordable housing for poor people.

The issue is a very real one for Lee Dudley. The former passport officer, who raised four children as a single father and later lost his job due to illness, had been living at the Folsom for a year when the fire forced him and fellow residents out, he said. Fortunately, he found a room three months later at the Chronicle Hotel, where he still lives. But others have not been so lucky.

“It’s almost impossible to find housing if you’ve got low income,” said Dudley, 55, a plaintiff in the Housing Clinic’s lawsuit. He would have liked to return to the Folsom, where he paid $260 a month, because it was in a better area than the hotels in the Tenderloin and around Sixth Street, he said.

“You always have people on the streets asking for money, lying in the doorways, and you didn’t have that at the Folsom. You had it inside, sometimes, but you weren’t accosted going in and out of the doorways.”

Landlords have chafed at hotel conversion restrictions because tourist lodgings are more lucrative. The Soma Inn brings in about $18,000 a month as a 47-room hotel-hostel, the operator of the hotel, Salim I. Dahud, said in a written court declaration. But if it were run as a residential hotel, he could only make $10,140–not enough to cover his lease payments of $11,500 per month, plus expenses, Dahud testified.

He said he and his partner have leased the hotel from its owners and operated it as a tourist hotel since reopening in 1997, after the fire damage was repaired. The dispute over the use of the hotel started then, in 1997.

The Tenderloin Housing Clinic represented a dozen tenants of the former Folsom Hotel in a lawsuit filed in September 1997. The suit alleged that the residents were not offered the chance to return to the hotel – where they were paying $260 a month–after repairs were made. The lawsuit also alleged that the subsequent use of the building as a tourist hotel violates the city planning code.

Under city law, tenants displaced by fire must be allowed to return to their rooms–with no increase in rent–once repairs are completed.

Though the lawsuit was settled in March for $75,000, the issue of zoning remains, and should have been resolved long ago, said Shaw of the Housing Clinic. The fact that it hasn’t been sets a bad example for other landlords, who may conclude that The City will look the other way if they convert their residential rooms to tourist use, Shaw said. “It sends a message to people that they can violate zoning laws and the planning code and get away with it,” he said. “When you don’t have the Planning Department enforcing its own laws, you have a very serious problem in The City, and it just worsens our city’s housing crisis.”

The owners and their attorney argue that the place always has operated as a tourist hotel. According to city law, if it was a tourist hotel in 1990, when the zoning in the neighborhood changed to prohibit such uses, it could be grandfathered in and allowed to continue renting by the night. But if its tenants were long term at that point, then the hotel could not go back later and convert to tourist use, city officials said.

A listing in the San Francisco telephone white pages from 1988 describes the Folsom Street Hotel, at the same address, as being “for AIDS-ARC Patients: a Catholic Charity Residential Facility.” There is no listing in the yellow or white pages for the hotel in 1990.

Further, the Tenderloin Housing Clinic has records of placing long-term welfare clients there through a city program. Thirty-one such tenants were at the hotel in 1990, when the code changed, according to the Housing Clinic. At the time of the fire, in 1993, there were 40.

According to Deputy City Attorney Andrew Schwartz, the owner has the burden of proof to show tourist use at the time of the code change. Whatever The City decides will not have a great effect on the housing available to poor San Franciscans, since working people like bike messengers already make up part of the hotel’s clientele, said Richard Stratton, attorney for the owners, Chhotubhai “Charlie” Patel and his wise, Svitaben.

As it stands now, the hotel is a plus for its South of Market neighborhood, Stratton said. “I think this is the kind of place that adds value to Folsom Street, and that’s what The City wants. I don’t think there’s any harm in having a few backpackers staying there.”